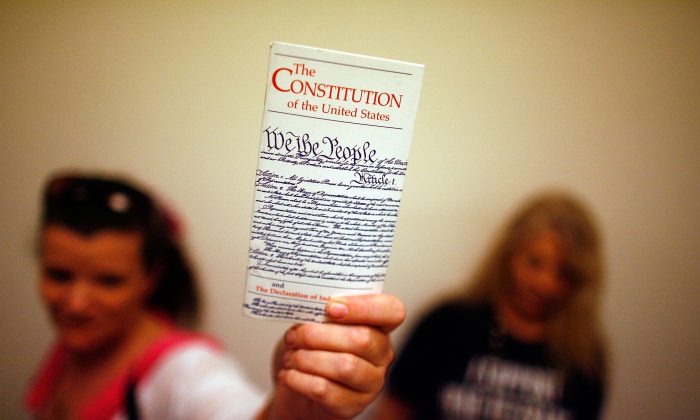 Lisa Petry holds up a copy of the U.S. Constitution on Capitol Hill in Washington on July 25, 2008. (Chip Somodevilla/Getty Images)

Dec. 15, 2018, was Bill of Rights Day. The Bill of Rights (the first 10 amendments) appended to our constitution took effect on Dec. 15, 1791—227 years ago. In viewing the status of the Bill of Rights today, it’s possible to adopt either a “the glass is half empty” or a “half full” perspective.

Certainly, relative to China, the Bill of Rights keeps Americans freer. In China, the government is oppressing the Uyghur minority in Xinjiang Province in ways specifically forbidden in the United States by the Bill of Rights. The Chinese government can order one of its agents to live in a family’s house, or send anyone without a trial to a “re-education camp” merely for having given voice to religious ideas, thereby separating parents from their children and often depriving families of their primary breadwinner.

Such tyranny is blocked in the United States by our First Amendment, which guarantees freedom of speech and religion; Third Amendment, which states that government agents cannot occupy houses without permission; Fourth Amendment, the ban on “unreasonable searches and seizures”; Fifth Amendment, prohibiting any deprivation of liberty without “due process of law”—i.e., a lawful public trial by jury and with guaranteed legal counsel as per our Sixth Amendment; and the Eighth Amendment, which bans “cruel and unusual punishments,” such as the arbitrary separation of citizens from their families even though they have done no harm.

As is the case in China, the aggression against individual rights come from those who believe that the state must have the power to overrule individual rights in the name of the common good. The ideology that exalts the state as above all is diametrically opposed to the founders’ vision and values.

The purpose of the Bill of Rights was to codify into the supreme law of the land the principle of government set forth in our Declaration of Independence. The essential premise of the Declaration is that “all men are created equal [and] endowed by their Creator with certain unalienable rights” and that the purpose of government—its very raison d’être—is “to secure these rights.” Further, “that whenever any Form of Government becomes destructive of these ends, it is the Right of the People to alter or to abolish it.”

In other words, the government was to serve under citizens, not rule over them.

The founders—generally wise and learned men—were students of history. They knew that the perennial threat to those sacred rights of individuals was the power exercised by governments. The entire Bill of Rights was written to circumscribe the power and ability of the federal government to infringe on individual rights. This point is unmistakable when one reads the Ninth and 10th Amendments together. Indeed, these two are rightly understood as Siamese twins.

The Ninth deals with rights. It states, “The enumeration in the Constitution of certain rights shall not be construed to deny or disparage others retained by the people.” In other words, if a particular right is not specified in the Constitution, the default assumption is that the people have that right.

There you have it: Where the Constitution is silent, the benefit of the doubt always belongs to individuals’ rights over government power.

Despite that clear language, the federal government has arrogated to itself power to intrude into previously private economic matters. Those extra-constitutional—and therefore unconstitutional—areas of intervention include agriculture, housing, labor, energy, education, health care, retirement, and so on.

Two of the more pernicious results of the expansion of the federal government beyond its constitutional confines are: 1) an unfathomably gigantic national debt that will cruelly burden our children; and 2) a chronic toxicity in public discourse now that nearly every corner of our economic lives has become a public political instead of a private economic issue.

The founders viewed private property as key inalienable rights that government must uphold. Said John Adams, “If ‘Thou shalt not covet’ and ‘Thou shalt not steal’ were not commandments of Heaven, they must be made inviolable precepts in every society before it can be civilized or made free.” Said James Madison, “[T]hat alone is a just government which impartially secures to every man what is his own.”

Thus, the founders adopted the Fifth Amendment stipulating that “No person … [should] be deprived of life, liberty, or property without due process of law.” That meant that even if 99 percent of Americans believed that a fellow citizen had accumulated too much wealth, they could not justly take it from him, even by majority vote. “Due process of law” referred to a legal trial wherein the only justification for taking property from a person was in retribution for crimes committed by that person; an innocent person’s property was off-limits.

That all changed, of course, with the adoption of the 16th Amendment authorizing a progressive (Marxian) income tax. Since then, democratic majorities have striven to plunder as much private wealth as they can to fund their grandiose government programs.

The progressive ideology that believes that state power is the proper agent to attain a just society consistently wars against the Bill of Rights. For example, progressives—not so unlike the communist rulers of China—have whittled away at the First Amendment rights of free speech and religion.

According to the Foundation for Individual Rights in Education, close to 90 percent of U.S. colleges “maintain policies that restrict or could restrict student and faculty expression.” And who can forget the Obama administration’s relentless insistence that religious sects that view abortion as murder be compelled to purchase insurance that would cover abortions?

The progressive left also wages perennial war against the Second Amendment right of non-criminals to own firearms. When one remembers the founders’ vision of government—that all of its powers are derived from the people—then to say that government law enforcement officers (the deputed agents of the people) may carry guns to defend the population, but that the people themselves (the principals whose rights government agents are charged with protecting) may not themselves own, have, carry, and use those same means to defend their lives is absurd.

The true polarization of America’s body politic today is the conflict between the principle that individual rights are primary and government power secondary (the founders’ vision) and the progressives’ belief that government power must be supreme so that allegedly wise leaders can plan and construct a great society by controlling citizens’ wealth and lives.

It all boils down to the age-old battle between freedom and tyranny.

As we reflect on our hallowed, but tattered, Bill of Rights this year, we would do well to recall an observation that U.S. Sen. Daniel Webster made in 1837: “In every generation, there are those who want to rule well—but they mean to rule. They promise to be good masters—but they mean to be masters.”

The Bill of Rights may be the best legal protection against such ambitious people ever devised in human history. But no constitution or bill of rights is ever self-enforcing. The people have to have the will and determination to uphold it.

Those of us who love liberty and understand the importance of individual rights have an uphill task ahead of us. We need to rebuild the ethical foundations of the American republic if we are to remain a free people.

Mark Hendrickson is an adjunct professor of economics and sociology at Grove City College. He is the author of several books, including “The Big Picture: The Science, Politics, and Economics of Climate Change”.