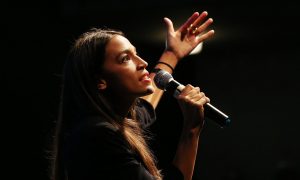 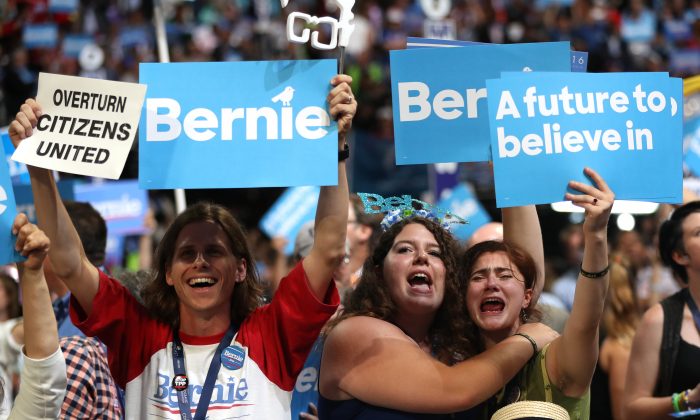 Supporters of Sen. Bernie Sanders (I-VT) on the first day of the Democratic National Convention in Philadelphia on July 25, 2016. Bernie Sanders promotes and his supporters believe in democratic socialism. (Joe Raedle/Getty Images)
Viewpoints

The goal of democratic socialists is socialism—i.e., government control of economic production. Genuine socialism, when practiced, inevitably leads to economic stagnation and ruin for the following reasons:

2. It commits the intellectual error of treating human beings as fungible (i.e., the same, and therefore interchangeable) and so, socialist planners assume that their bureaucratic minions have the same specific knowledge and special talents that enable private entrepreneurs to create wealth more productively and efficiently.

3. It discards market-based prices—i.e., those based on supply and demand, thereby losing the ability to coordinate production rationally and allocate scarce resources efficiently. The inevitable result is the overproduction of some goods—thereby wasting scarce resources—and the underproduction of others, meaning that many people are unable to procure the things they want, making them poorer.

4. Central economic planners, no matter how brilliant or well-intentioned, don’t and can’t know what you and I want as well as you and I know what we want. Capitalism is a system of consumer sovereignty under which firms profit by producing what we want instead of producing what the government commands, as is the case under socialism. (Note: Cronyism isn’t capitalistic but socialistic, because cronyism involves governments, not consumers—“we the people”—determining which businesses prosper.)

“Democratic” merely specifies the means to the end. The patron saint of socialism, Karl Marx, wrote in “The Communist Manifesto” that there are two paths to socialism—the quick one of a violent revolution by “exploited” workers (his preference), or the more gradual, progressive implementation of socialism via democracy (see Chapter 2 of the “Manifesto”). A majority of U.S. workers have been too prosperous and satisfied with life to launch bloody revolutions, leaving the democratic path to socialism as the only viable strategy for American socialists to pursue.

The label “democratic socialism,” like its kindred labels “progressive” and “liberal,” have acted as fig leaves for American socialists, hiding their ultimate goal. In recent years, American socialists have been able to strive for socialism while having plausible deniability that they are socialists. They have truthfully stated that they haven’t explicitly advocated the government takeover of all the means of economic production. Here they have been coy. Instead of calling for complete control, their perennial agenda has called for more control. How much more? They never say—it’s open-ended. You are not likely to hear a socialist politician say that there is too much government control over economic production for the simple reason that socialists believe in and want government control over economic production. But it is significant that, led by Bernie Sanders, progressives now feel safe enough to come out of the closet and admit that they are (democratic) socialists.

Don’t be fooled by the adjective “democratic.” It is not benign. Wait a minute, you say. Isn’t democracy good? Isn’t that what America is all about? Well, as the TV commercial used to say, “Not exactly.”

The word democracy is linguistically problematical, due to ambiguities and different usages. On the positive side, the United States is a democratic system, meaning that people are to be free and that our political system makes government subservient and accountable to the people. The 19th-century poet, Walt Whitman, articulated the essence of America’s democratic ideal thusly:

“… Government can do little positive good to the people, [but] it may do an immense deal of harm. And here is where the beauty of the Democratic principle comes in. Democracy would prevent all this harm. It would have no man’s benefit achieved at the expense of his neighbors … This one single rule, rationally construed and applied, is enough to form the starting point of all that is necessary in government; to make no more laws than those useful for preventing a man or body of men from infringing on the rights of other men.”

The benign version of democracy is rights-based. So is our American constitution, as I explained in my article for Bill of Rights Day last month.

However, democracy is also a theory of power, and government power poses a perpetual threat to individual rights. That is why American founders James Madison and John Adams abhorred democracy while communist/socialist icons Marx and Lenin were enthusiastic advocates of democracy.

The contrast is stark:

Adams: “Democracy never lasts long. It soon wastes, exhausts, and murders itself. There was never a democracy that did not commit suicide.”

Madison: “… democracies have ever been spectacles of turbulence and contention; have ever been found incompatible with personal security or rights of property; and have in general been as short in their lives as they have been violent in their deaths.”

Marx: “The way to achieve socialism is for the masses to ‘win the battle of democracy.’ ” (“Manifesto,” Chapter 2).

Lenin: “A democracy is a state which recognizes the subjection of the minority to the majority.”

When democracy becomes crude majority rule, nobody’s rights are safe. Instead of peacefully trading with each other in a system where property rights are secure, society degenerates into a vicious squabble as various groups of citizens demand that government give them benefits paid for by other citizens. Many historians have observed the unstable, destructive tendencies of democracy, but the British archeologist and historian Sir Flinders Petrie best articulates the danger of democratic socialism: “When democracy has attained full power, the majority without capital necessarily eat up the capital of the minority and civilization steadily decays.”

Simply because a majority favors something doesn’t make it right or just. Remember, democratic majorities voted for the executions of Jesus and Socrates—two of the most heinous, unjust events in human history. Crude majoritarian democracy can be as violent and oppressive as any other form of tyranny.

Democracy in the eyes of democratic socialists boils down to this: There are more of us than there are of you, so we will take your property and dispose of it as we see fit. This is the primitive ethos of “might makes right.” It embodies the immorality of the thug, the robber, the thief. In the fraudulent name of “social justice,” it tramples genuine justice. It is hell-bent on replacing our rights-based constitutional order with top-down central economic planning— i.e., with a tyranny that dictates who produces what for whom.

Democratic socialists want to replace our rights-based, capitalistic system—a system which, despite its imperfections and inconsistencies, has brought more freedom and more prosperity to more people than any other system—with socialism, a system that has oppressed and impoverished people wherever it has been implemented (see Venezuela today).

Sadly, the degree of economic and historical ignorance among Americans may result in a majority voting for our own destruction. Wouldn’t future historians have a field day explaining such folly?

Dr. Mark Hendrickson is adjunct professor of economics at Grove City College. He is the author of several books including “The Big Picture: The Science, Politics, and Economics of Climate Change.”