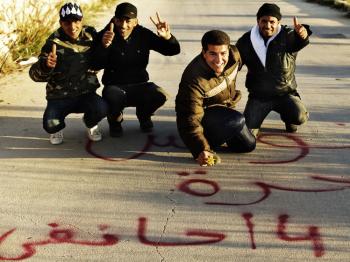 Epoch Times Staff
View profile
Follow
biggersmaller
Print
The weary migrants arrive packed in small fishing boats, landing on Italian soil. A mere 200 miles away across the Mediterranean Sea is their home: Tunisia. In the wake of the Jasmine revolution that ousted long-term President Zine El Abidine Ben Ali, thousands of Tunisians have fled the country. Are they refugees fleeing chaos or migrants seeking economic prosperity?

One might wonder why Tunisians are fleeing. After all, only last month they accomplished their long sought-after wish for political change. But despite the ousting of President Ben Ali and high hopes for fair elections, life remains a struggle for many. One of the main reasons for demonstrating against Ben Ali in the first place was the country’s high unemployment.

While acknowledging that some Tunisians flee over fear of violence, chief spokesperson of the United Nations refugee agency, Melissa Fleming, said in a statement on Tuesday that most of the illegal migrants are going to Europe “in search of employment.”

The demographics of the arrivals supports the impression. Out of the 5,200 individuals the U.N. is aware of, only 20 were women and 200 children.

Indicators suggest that Tunisia’s economic fortunes have worsened since the overthrow. Days after the political change, David Hawley, senior adviser at the International Monetary Funds said at a press briefing that the month of protests led to a “decline in economic activity.”

According to Hawley’s statement on Jan. 20, Tunisia’s minister of the Interior estimated the decline to be equivalent to 4.5 percent of the GDP.

The U.N. refugee agency is concerned that people smugglers are now capitalizing on frustrations in Tunisia, by promising people a better life in Europe.

Tunisians, however, may have to be patient. According to Sylvia Maier, assistant professor at New York University School of Continuing and Professional Studies Center for Global Affairs, the transition to democracy takes a long time, up to one generation, and needs people to keep the flame burning.

The number of Tunisians fleeing to Italy has jumped dramatically since Ben Ali’s overthrow. In the first two weeks of 2011, only 14 Tunisians arrived in Italy. Since then, there have been over 5,000.

“Perhaps the current weak border patrolling and enforcement on the Tunisian end contributed to increasing the numbers of immigrants,” speculates Rym Kaki of the University of Southern California in an e-mailed response.

This unprecedented stream of Tunisians has caused the mayor of the small Lampedusa Island, the first landing point for many refugees, to declare a state of emergency. The recently reopened immigration center there with a capacity to handle 800 people could not handle the stream. Half of the migrants that have so far arrived on the island have been relocated to avoid overcrowding and water shortages. The U.N. agency has described the situation on the island as critical.

In an attempt to stop the flow of immigrants Tunisia’s government has sent troops to border cities. Witnesses told AFP that Tunisia’s coast guard crashed into at least one boat with refugees, causing it to sink and five people drown.