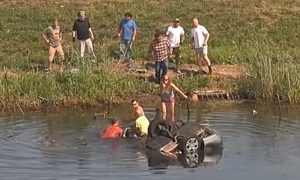 A Good Samaritan saw a car crash on the highway and was inclined to help the victims, but to his luck, the man he helped decided to steal his truck.

Felix Coffman, was driving on I-95 in Florida, when he saw a car accelerate past him. He then saw two cars ahead of him skew off to the right side of the highway: with one car crashing into the woods, catching on fire.

From A Burning Car to A Stolen Truck

One of the drivers that crashed waved down Coffman, who then pulled over to check on the drivers. After he saw the future thief with the burning car come out of the woods, he hurriedly attended to him, he explained in the police body camera video.

Coffman then returned to the first driver, and at this time, he turned his head to see the rear of his Ford truck leaving the scene: a good deed met with a bad return. The driver of the crashed and crispy 2003 Mitsubishi Lancer was Zachary Searls, 27, and a countywide alert was issued immediately for the suspect and the stolen vehicle.

On the Search for Searls

In the video, you can hear the officer give a description of the suspect after entering his patrol car, where he does a records check on Searl’s car—locating the vehicle’s registered address in Daytona Beach. The officer did the obvious, and visited the home in Daytona Beach—and sure enough, there was the stolen truck, parked in the driveway.

Searl was approaching his car as deputies arrived, but rushed back inside as soon as he saw them. When the officer with the body camera arrived, Searl was already detained and on his knees, wearing an unmistakably bright striped polo, paired with shorts.

According to the report, “Searls was transported to the Volusia County Jail where he remains on $6,000 bail,” and was charged with “grand theft of a motor vehicle, leaving the scene of a crash with injuries, no valid driver’s license and resisting an officer without violence.”

The Truck is Back, but It’s Knocking

The other driver did not receive any threatening injuries, but he was transported to Halifax Health Medical Center in Daytona Beach. And Coffman got his truck back. He made sure to thank on Facebook those who checked on his safety and offered him a ride when his truck was gone.

Searls is currently in custody. This is the eleventh time Searls has been arrested; a list of his mugshots can be seen in the Volusia County Corrections records.

He has been charged for grand theft multiple times, as well as trespassing and resisting arrest, dating back to 2011.