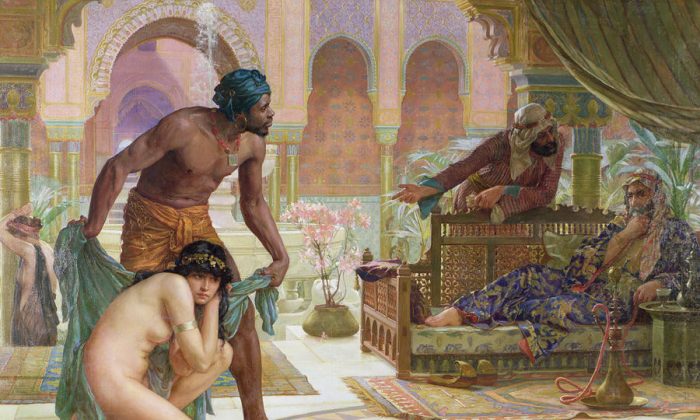 The White Slaves of Barbary

Much attention and condemnation has been directed towards the tragedy of the African slave trade, which took place between the 16th and the 19th centuries. The vast majority of those enslaved were from the central and western parts of Africa, sold to European slave traders and transported to the New World. However, another despicable trade in humans was taking place around the same time in the Mediterranean.  It is estimated that up to 1.25 million Europeans were enslaved by the so-called Barbary corsairs, and their lives were just as pitiful as their African counterparts. They have come to be known as the white slaves of Barbary.

Slavery is one of the oldest trades known to man. We can first find records of the slave trade dating back to The Code of Hammurabi in Babylon in the 18th century BCE. People from virtually every major culture, civilization, and religious background have made slaves of their own and enslaved other peoples. However, comparatively little attention has been given to the prolific slave trade that was carried out by pirates, or corsairs, along the Barbary coast (as it was called by Europeans at the time), in what is now Morocco, Algeria, Tunisia, and Libya, beginning around 1600 AD.

Anyone travelling in the Mediterranean at the time faced the real prospect of being captured by the corsairs and taken to Barbary Coast cities and being sold as slaves.

However, not content with attacking ships and sailors, the corsairs also sometimes raided coastal settlements in Italy, France, Spain, Portugal, England, Ireland, and even as far away as the Netherlands and Iceland.  They landed on unguarded beaches, and crept up on villages in the dark to capture their victims.  Almost all the inhabitants of the village of Baltimore, in Ireland, were taken in this way in 1631.  As a result of this threat, numerous coastal towns in the Mediterranean were almost completely abandoned by their inhabitants until the 19th century.

In the 13th and 14th centuries, it was Christian pirates, primarily from Catalonia and Sicily, that dominated the seas, posing a constant threat to merchants. It was not until the expansion of the Ottoman Empire in the 15th century that the Barbary corsairs started to become a menace to Christian shipping.

Around 1600 AD, European pirates brought advanced sailing and shipbuilding techniques to the Barbary Coast, which enabled the corsairs to extend their activities into the Atlantic Ocean, and the impact of Barbary raids peaked in the early to mid-17th century.

While the Barbary slave trade is typically portrayed as Muslim corsairs capturing white Christian victims, this is far too simplistic.  In reality, the corsairs were not concerned with the race or religious orientation of those they captured. Slaves in Barbary could be black, brown or white, Catholic, Protestant, Orthodox, Jewish or Muslim. And the corsairs were not only Muslim; English privateers and Dutch captains also exploited the changing loyalties of an era in which friends could become enemies and enemies friends with the stroke of a pen.

“One of the things that both the public and many scholars have tended to take as given is that slavery was always racial in nature,” said historian Robert Davis, author of Christian Slaves, Muslim Masters: White Slavery in the Mediterranean, the Barbary Coast, and Italy. “But that is not true,” he added.

In comments which may stoke controversy, Davis claims that white slavery had been minimised or ignored because academics preferred to treat Europeans as evil colonialists rather than as victims.

Life as a Barbary Slave

The slaves captured by the Barbary pirates faced a grim future. Many died on the ships during the long voyage back to North Africa due to disease or lack of food and water. Those who survived were taken to slave markets where they would stand for hours while buyers inspected them before they were sold at auction.

After purchase, slaves would be put to work in various ways. Men were usually assigned to hard manual labour, such as working in quarries or heavy construction, while women were used for housework or in sexual servitude.  At night the slaves were put into prisons called ‘bagnios’ that were often hot and overcrowded. However, by far the worst fate for a Barbary slave was being assigned to man the oars of galleys. Rowers were shackled where they sat, and never allowed to leave. Sleeping, eating, defecation and urination took place at the seat. Overseers would crack the whip over the bare backs of any slaves considered not to be working hard enough.

The End of the Barbary Corsairs

Corsair activity began to diminish in the latter part of the 17th century, as the more powerful European navies started to force the pirates to cease attacking their shipping. However, it wasn’t until the first years of the 19th century, that the United States of America and some European nations began to fight back more fervently against the Barbary pirates.

Algiers was frequently bombarded by the French, Spanish and Americans, in the early 19th century. Eventually, after an Anglo-Dutch raid in 1816 on Algiers, the corsairs were forced to agree to terms which included a cessation of the practice of enslaving Christians, although slave trading of non-Europeans was allowed to continue.

Occasional incidents continued to occur until another British raid on Algiers in 1824, and finally, a French invasion of Algiers in 1830, which placed it under colonial rule. Tunis was similarly invaded by France in 1881. Tripoli returned to direct Ottoman control in 1835, before finally falling into Italian hands in the 1911 Italo-Turkish War. The slave trade finally ceased on the Barbary coast when European governments passed laws granting emancipation to slaves.