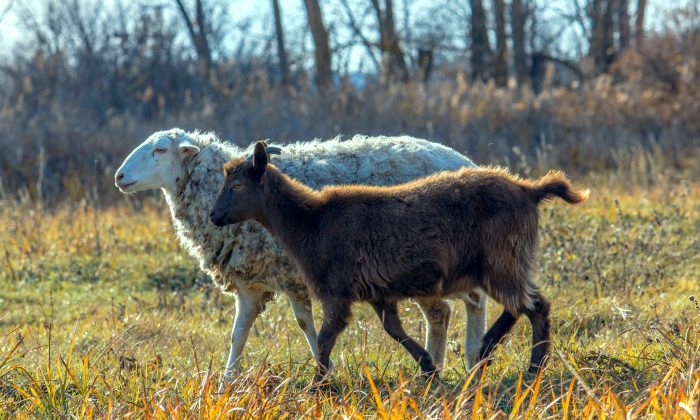 Sheep and goats have long represented right and left, respectively, based on a passage in the Bible. (Zahaoha/pixabay.com)
Viewpoints

In previous articles, I’ve explained how we can achieve a better understanding of left and right. In the first instance, I focused on the way left and right are both subversively framed as left-wing ideologies that essentially stand for the same authoritarian “might makes right” values. In the second instance, I explained how collectivism and individualism are better ways to understand the political spectrum, albeit open to corruption and subversion in their own right.

In this article, I will explain the true origin of left and right, via an ancient system of spirituality.

Before we can truly understand this, we must establish where the false origins of left and right come from. The answer to this question is the French Revolution.

When the French National Assembly was formed in its short-lived existence during 1789, supporters of the king and the religious order sat on the right, and radicals sat on the left. These radicals were made up of the Jacobins, who would usher in the Reign of Terror. In addition to the beheading of Louis XVI, the last king of France, this would result in the massacre of hundreds of thousands of people by guillotine.

Ever since, it’s been argued that this is where left and right originates, but this is a false dichotomy akin to what I’ve previously described. One very important detail to bear in mind is that both sides of the French National Assembly were absolutists that stood for positive rights.

In other words, they saw no limits to power. Whether it was the right of the Assembly, who stood for the absolute authority of the monarchy, with the church as its guiding moral hand, or the Jacobins, who stood for a communal ideology that would become the foundation for communism, both groups did not stand for any kind of natural rights or limited government.

In the centuries that followed, this false dichotomy served absolutists well. It allowed them to manufacture a false dialectic—based on German philosopher Georg Hegel’s thought, which was later described as the triad of thesis, antithesis, and synthesis—in which they push the momentum of history in their pre-prescribed direction, partly through revisionist history about the origins of left and right. This culminates in synthesis after synthesis that concentrates power into the hands of a shrinking cabal of absolutist rulers, working toward an ever-expanding oligarchy of supranational organizations.

Hence, nowhere in modern political discourse do we hear about restrictions to power via limited government or natural law. Only in the United States is this tradition barely being kept alive, as constitutionalists struggle to hold back the power of the state.

Let us not forget, however, that the roots of the U.S. Constitution and Bill of Rights emerged from a completely different struggle to the American Revolution—namely, the English Civil War. It was through this battle for liberty that the 1689 Bill of Rights would come to be formed from the works of John Locke—arguably the greatest natural rights philosopher in the last 300 years or so.

All this history is dismissed by those pretending that left and right originates with the French Revolution, as though the parliamentary struggle of England had no part to play.

There is, however, a spiritual version of left and right that all others stem from. So ancient is this that it even appears in the Bible. Matthew 25:32–33 states that Jesus will “separate them one from another, as a shepherd divideth his sheep from the goats: And he shall set the sheep on his right hand, but the goats on the left.”

Other parts of the Bible also describe how left and right relate to God, although Matthew 25 is perhaps the most revealing in this regard. As this chapter progresses to verse 41, it reads, “Then he will say to those on his left, ‘Depart from me, you who are cursed, into the eternal fire prepared for the devil and his angels.”

Some may be aware that the goat is a symbol of Satanism, and while there is no explicit Biblical reference to Satan sitting on the left side of God, the Bible does make it clear that Lucifer fell from Heaven in Isaiah 14:12, which states: “How art thou fallen from heaven, O Lucifer, son of the morning! How art thou cut down to the ground, which didst weaken the nations!”

What’s more important than such debate, however, is how the left-hand side of God is associated with the characteristics of the goat. Due to its nature, this animal is notoriously difficult to tame, making it an archetypal symbol of rebellion. Hence, the left-hand path tradition stems from rebellion against God.

The true origin of left and right is, therefore, an ancient dynamic, wherein those on the right-hand path respect the objective morality attributed to God and natural laws.

Those on the left-hand path reject such limits, sometimes through outright rebellion. Others attempt to use the tradition of divine right to become higher than God, as they claim to be God’s representatives on earth. Both can be summarized by a combination of relativism and legalism that places human authority above God and natural law—also known as “might makes right.”

Conversely, those on the right-hand path recognize free will and the personal responsibility that goes with this, placing God and natural law above human authority.

There’s a very good reason for why this ancient tradition is hidden from the masses, since freedom directly corresponds to the amount of morality we exhibit. When we believe that we can be laws unto ourselves, narcissism will enslave us all.