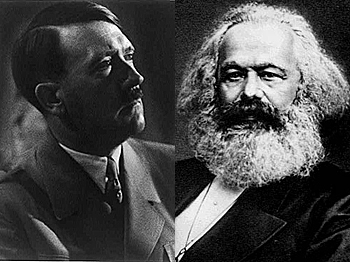 Adolf Hitler and Karl Marx are usually thought of as representing the two ends of the political spectrum, but are actually more similar to each other. (Adolf Hitler—Library of Congress; Karl Marx—Public Domain)
Viewpoints

Making Sense of the Political Spectrum

Politics can be terribly confusing, and the sad fact is that much of this is deliberate.

The political spectrum is a logical and moral mess, with the root of the problem being the sheer bias toward the left. We’re told that people on the left are compassionate and caring, while those on the right are greedy, selfish, and intolerant, but on what grounds?

As you can imagine, many don’t want to associate with the right when there’s a laundry list of pejoratives attached, especially in a climate of Antifa violence, mainstream media smears, and the risk of losing one’s job.

Many that move away from the left end of politics take to calling themselves centrists or moderates because that sounds more reasonable than picking one side over the other. But if we take some time to analyze the political spectrum, is it really accurate to suggest that being right-wing is inherently shameful or immoral?

You wouldn’t think so, based on the way politics is framed these days, but there are extremes on both the left and right side of politics.

On the far left, we have communism, a form of totalitarianism that receives far less criticism than it should, given its responsibility for the deaths of more people in the 20th century than any other political ideology. On the far right, there’s fascism, with Nazism being one form this takes. It’s no accident that people with very little knowledge about politics are aware of the dangers of the “far right”—hammered so pervasively into the public consciousness that it’s similar to the treatment of one of Pavlov’s dogs.

Anyone who has tried to make people aware of the history of communism, however, knows that the same can’t be said for the far left.

Academics have systematically downplayed the sins of communism because so many of them are politically far left, let alone left-wing. At the same time, they’ve constantly highlighted the sins of fascism, and this mentality gradually has spread throughout the institutions of society. What this results in is little to no awareness of the crimes committed by communism, with an incessant (and often paranoid) focus on the dangers of fascism—past and present.

Fascism is such a discredited ideology that it’s become a bad political parody to reference. There’s even an internet adage called Godwin’s law to describe how common and inevitable it is to make a comparison to Nazis or Hitler the longer an online exchange takes place. Someone ought to bring this to the attention of the Democrats, CNN, et al., because it really is becoming nothing short of absurd to continuously refer to anyone right of Hillary Clinton as the reincarnation of Hitler.

If you don’t believe that everyone on the right is like Hitler, at the very least, you’re supposed to believe that left and right are both totalitarian at the furthest ends of the spectrum. But it doesn’t take much to see how irrational this is. A rational spectrum should reflect opposites, meaning that it moves from positive to negative. How, then, can the far left and far right both reflect negatives? The answer is, they can’t, if it’s an honest and logical reflection of reality.

There are two reasons for such a messy and irrational political spectrum. First is the denial of the left-wing nature of fascism. This ideology originated with the labor unions of Italy, as Mussolini himself was once a member of the Italian Socialist Party. Rather than being the opposite of socialism, fascism is a variation of the political ideology that replaces economic class with race.

Fascism is inherently authoritarian because it’s based on the belief that “might makes right.” Those aligning with this way of thinking believe that morality is ultimately subjective, power being the only true measure of what’s right. Communism is exactly the same in this regard, and no amount of quibbling can change that.

Yes, there are differences between communism and fascism, but in terms of moral relativism, they’re identical. It’s for this reason that communism and fascism both argue that individuals have no rights without the power to legitimize them. Semantics about equality versus hierarchy, race versus class, who owns the means of production, and so on, don’t invalidate this in the slightest.

To understand why, consider the following: Imagine a slave owner who controls absolutely everything his slaves do. Another slave owner gives his slaves some choices here and there. In either case, the master still believes he has the moral right to own slaves. The differences between communism and fascism can be summed up in the same way. Communism and fascism are like masters that believe you have no rights without the permission of authority, and as long as you have a master, you’re still a slave, no matter how generous your owner is.

The second reason for the confusion is called horseshoe theory, where, rather than a political spectrum being a straight line, the far left and right are closer to one another than the middle—just like a horseshoe. The theory originates with French left-wing intellectual Jean-Pierre Faye, who acknowledged that the far-left of politics was as totalitarian as fascism. But rather than admitting that the left is based on the same might makes right as fascism, his horseshoe theory was a means for disenfranchised left-wingers to disavow totalitarianism, while still maintaining their support for socialism.

It’s no accident, therefore, that people calling themselves moderates and centrists were usually formerly on the left of politics.

It’s clear that the left projects its sins onto the right, to avoid owning them. This goes a long way toward explaining why we find ourselves in a situation where fascism is considered the worst of all evils, as though communists never did anything wrong.

If we’re going to fix this mess, the entire political spectrum needs to become a reflection of values, not various interpretations of might makes right.