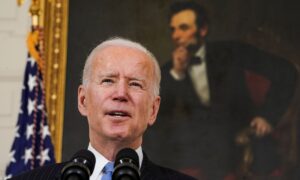 For someone like me who respects the Supreme Court (SCOTUS), its June 17 decision (pdf) protecting Obamacare is uncomfortable reading. The case surely will feed public belief that America now has two systems of justice: an indulgent one for establishment liberals and a harsher one for the rest of us.

As Justice Samuel Alito noted in his dissent, the court repeatedly has granted standing, on very flimsy grounds, to “progressive” state officials pursuing such causes as mandated contraceptives, shielding undocumented aliens, and global warming. But in the latest case, Texas v. California, the court denied standing to 18 states incurring billions of dollars in losses because of a law that—by the court’s own previously announced standards—is flatly unconstitutional.

In earthy terms, the question for the court was something like this: Sluggo wants some of Sandra’s money. So Sluggo tells Wimpy that he’ll break Wimpy’s arm unless Wimpy steals Sandra’s purse. Wimpy complies. Sandra may file a criminal complaint against Wimpy. May she likewise file against Sluggo?

The common-sense answer is yes. And that’s the answer the court has given in other cases. But in Texas v. California the answer was no.

The only silver lining is this: Maybe—just maybe—this ruling will be the “whack with the 2-by-4” that gets the mule’s attention. This case tells mainstream America we can’t rely on normal electoral politics to reform the court—two of former President Donald Trump’s three nominees voted to protect Obamacare. It further debunks the common claim that the court has a conservative majority. And it tells us there are no realistic alternatives to the ultimate constitutional remedy—calling a convention for proposing amendments.

Now let’s get into the weeds:

Obamacare’s formal name is the Patient Protection and Affordable Care Act. It’s commonly called the Affordable Care Act, abbreviated “ACA.” The name has become somewhat of a joke, because the ACA has mostly made health care less affordable.

The ACA clamped a massive scheme of federal regulation on the health care and health insurance industries. Insurance companies couldn’t afford to comply with the ACA’s requirements. So Congress gave them a new source of revenue by the jack-booted expedient of commanding almost everyone to buy government-approved insurance. This command is called the individual mandate.

The ACA also ordered the states to expand their Medicaid programs beyond the classes of poor people Medicaid traditionally has served. This is sometimes called the Medicaid mandate.

After Congress passed the ACA in 2010, the National Federation of Independent Business and many state governments challenged its constitutionality.

Law professors are overwhelmingly left-of-center, so almost all of them jumped to Obamacare’s defense. Relatively few of us contended the measure was unconstitutional. Yet when the Supreme Court ruled on Obamacare in 2012, opponents had won three of the four issues in the case (pdf). Specifically, the court ruled that (1) the Medicaid mandate was unconstitutional, (2) the Constitution’s grant to Congress of the power to “regulate Commerce … among the several States” didn’t authorize the individual mandate, (3) the Constitution’s Necessary and Proper Clause didn’t authorize the individual mandate, but (4) the financial penalties for violating the individual mandate could be justified as a permissible tax.

Unfortunately, the plaintiffs didn’t inform the court of a more fundamental problem with the law: The Constitution doesn’t give Congress power over the general insurance market. The historical record tells us that the Constitution’s phrase “regulate Commerce” doesn’t include most forms of insurance.

Perhaps the plaintiffs failed to raise this argument because of a 1944 Supreme Court case holding that insurance is “Commerce.” But that case was laughably defective, and after it was issued Congress itself effectively repudiated it. One could argue it should be overruled, but the challengers apparently didn’t want to assume the burden.

At any rate, most everyone agreed that the individual mandate was central to the law and that if the mandate fell, the rest of the law would fall also. So the court’s decision preserving the mandate preserved the rest of Obamacare’s gargantuan regulatory scheme.

After the court’s 2012 decision, many commentators observed that SCOTUS seemed to be straining to uphold the ACA. For one thing, the ruling overrode the actual words of the law. Those words said that the financial penalties were penalties, not taxes. Moreover, unlike the court’s other three rulings, the tax decision—which no one saw coming—was based on very slender historical evidence. At the time, I wrote that if the justices believed the tax issue was so important, they should have asked the parties to provide more information on the subject.

Instead, the court just guessed. And the guess turned out to be wrong: Later research showed that the mandate certainly wasn’t a tax, at least not according to how the Constitution uses that word (pdf).

Then in a 2015 case, the justices again rewrote the ACA and saved Obamacare from itself (pdf).

In 2017, Congress failed to repeal the bare command to buy insurance, but it did repeal the financial penalties for disobeying. That should have been the end of Obamacare, because the justices had told us the mandate was unconstitutional without the “tax” to support it, and the mandate was central to the law: No penalty, no tax. No tax, no mandate. No mandate, no Obamacare.

Yet, for reasons not entirely clear, the federal bureaucracy continued to operate all the rest of Obamacare’s Rube-Goldbergian machinery. Because this machinery included some very expensive requirements, Texas and 17 other states sued to invalidate the rest of the ACA in 2018.

The case should have been a slam dunk. After all, everyone—including the text of the law—agreed that the ACA couldn’t survive without the individual mandate. The court had already ruled that the financial penalty was the only reason the mandate was valid. And Congress had repealed that financial penalty.

The states won in the trial court. They partly won in the appeals court.

And then the Supremes stepped in to save Obamacare for a third time: Justice Stephen Breyer’s opinion for the 7–2 majority ruled that neither the states nor the two individual plaintiffs had standing to sue.

A plaintiff obtains standing by alleging that the court can remedy injury caused by the defendant’s conduct. There was no question about the injury: The ACA had cost the states an enormous amount of money. There was no doubt that the court could remedy the damage. All it had to do was void the law.

Yet Breyer ruled that because the mandate’s financial penalties had been repealed, the mandate wasn’t the cause of the states’ losses. He said that those losses came from other parts of the law, and the states weren’t challenging those.

But wait … almost everyone—including the justices in the 2012 case—had agreed that the mandate supported the entire Obamacare concoction. If the mandate was still around, it was fueling all the other costly regulations. Sluggo (the mandate) wasn’t stealing Sandra’s (the states’) purse directly, but he was the reason that Wimpy (the rest of the law) was doing so.

Breyer never addressed this. He merely assumed as true what almost everyone knew was false: that Obamacare’s other regulations were designed to operate independently of the mandate. This was a classic example of the fallacy known as petitio principii, or “begging the question.”

Alito’s dissent was both engaging and devastating. He detailed some of the enormous costs the plaintiff states had suffered due to the ACA. He compared these costs with the speculative damages the court had deemed sufficient to allow “progressive” state officials to sue to promote lefty causes. He detailed the extensive—essentially uncontradicted—evidence that the individual mandate was factually and legally inseparable from the rest of the law. And he showed—in a list of precedents dating back more than a century—that the court normally recognized the right of Sandra to complain about Sluggo.

And so, after more than a decade of suffering under an abusive and unconstitutional “law,” Americans are consigned to continue suffering. The Supreme Court won’t help them. Congress won’t help them. The executive branch certainly won’t.

Can there any clearer demonstration of why we need a convention of the states to take back our government?

Robert G. Natelson’s constitutional research has been cited repeatedly at the Supreme Court, both by parties and justices. A former constitutional law professor, he’s a senior fellow in constitutional jurisprudence at the Independence Institute in Denver and the author of “The Original Constitution: What It Actually Said and Meant” (3rd ed., 2014). He was a principal author of successful Supreme Court briefs in the 2012 Obamacare case on the Medicaid Mandate and the Necessary and Proper Clause.