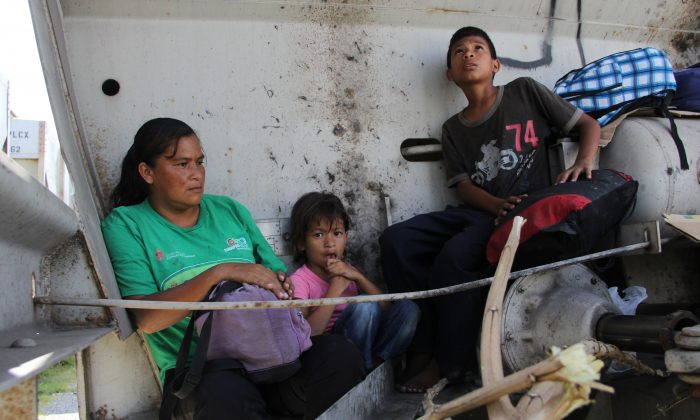 A Central American immigrant and her children sit inside the so-called La Bestia (The Beast) cargo train, in an attempt to reach the Mexico-US border, in Arriaga, Chiapas state, Mexico on July 16, 2014. (Elizabeth Ruiz/AFP/Getty Images)
US

The Other Border Crisis Solution

It seems not even a humanitarian crisis can break the logjam in Washington over immigration reform, which has such bipartisan support even Bill Gates, Sheldon Adelson and Warren Buffett agree we need it. But, perhaps that is not where the real solution lies. Maybe we should be rethinking the U.S. aid and development policies towards Central America that many claim have contributed to the current crisis. We asked a group of experts: How can U.S. policymakers address some of the root issues that are driving children to the U.S.-Mexico border in the first place?

The current crisis is a regional problem that will require a regional solution.

There are already signs of progress.  The governments of the main countries involved – the U.S., Mexico, Guatemala, Honduras and El Salvador – have taken individual and collective steps to begin tackling the crisis. Guatemala has launched the “Quédate” (stay) campaign warning its people of the dangers of migrating North. Mexico has launched the Southern Border Program (Programa Frontera Sur), a five-point plan to secure Mexico’s southern border with Guatemala and named the coordinator.  High-level officials from the U.S., Guatemala and México have met in Guatemala to discuss a coordinated approach to combat human trafficking networks.

Although small and insufficient, these actions represent first but important steps towards an effective regional strategy.   It is vital that they be sustained and expanded.

In the medium- to longer-term, Central American countries will continue the challenging tasks of strengthening domestic security and creating job opportunities, key drivers of migration to the United States. Washington can certainly help. Additional assistance to combat the drug trade, for instance, is critical. The United States also needs to put its own house in order – first and foremost by breaking the Congressional impasse on comprehensive immigration reform.

There are many “push” factors driving young Central Americans to the United States. Violence – fed in large part by gangs – is prompting many to flee. U.S. policy has played a role in growing these criminal organizations. For one thing, our deportation policies transported members of Mara Salvatrucha, or MS-13 – a gang formed two decades ago near MacArthur Park west of the Los Angeles – to countries like El Salvador. A net-effect has been to make this gang a transnational force.

And the U.S. appetite for drugs has helped finance these criminal enterprises. General John Kelly, commander of U.S. Southern Command, says that “perhaps 80 percent” of the corruption and violence in Honduras, El Salvador, and Guatemala is “directly or indirectly due to the insatiable U.S. demand for drugs, particularly cocaine, heroin and now methamphetamines, all produced in Latin America and smuggled into the U.S.”

Our immigration laws play a role, too. According to a study of unaccompanied minors conducted by Elizabeth Kennedy, a Fulbright scholar in El Salvador, one in three children going north cites family reunification as a primary reason for leaving home. The fact that we haven’t passed comprehensive immigration reform means many undocumented parents in the United States can’t legally send for their children. That means many of their kids will attempt to cross the border–often on their own.

Angelina Snodgrass Godoy, Director, Center for Human Rights at the University of Washington:

Many of the families streaming across the border are fleeing violence. Unfortunately, existing USAID programs for violence prevention in Central America have generated poor results.

Why? First, USAID favors “primary prevention” programs that aim to prevent at-risk youth in those countries from joining gangs, rather than second-chance or rehabilitation programs for gang-active youth. Kids who’ve had some gang contact – and that means most kids in marginalized communities – can’t participate in such programs. This dramatically underestimates the extent to which gangs are interwoven into the social fabric, writing off entire areas where gang involvement is not a choice but a survival strategy. Paradoxically, primary prevention targets support where it’s least needed.

Second, grassroots leaders like Antonio Rodríguez López in El Salvador need to be at the table in discussing how aid dollars can help. Any long-term solution has to be designed with participation from the communities most affected by the problem. There are many other contributing factors – entrenched poverty, unaddressed legacies of wartime violence, the insatiable US demand for drugs – but fundamentally, we should start by abandoning the notion that anyone can offer real alternatives without having a respected presence in the communities that are being ravaged by violence.

U.S. policy toward Central America needs to be fundamentally reframed.  The U.S. should immediately suspend all police and military aid to Honduras and Guatemala, where repressive governments and state security forces are feeding violence.  Human rights conditions placed by Congress on security aid in the 2014 Appropriations Act should be expanded to include Defense Department funding and strictly enforced, along with the Leahy Law, which requires the U.S. to suspend aid to individuals or units that have committed gross human rights abuses.  In Guatemala, the United Nations-mandated commission against impunity should be strengthened and a similar one created for Honduras.  In El Salvador, the U.S. should work respectfully with the new government, which is demonstrating political will to address impunity and violence. Throughout the region, rather than promote militarization under the rubric of drug interdiction, the U.S. should address drug consumption at home.

Any additional aid programs should be completely transparent and promptly evaluated with clear metrics, and in Guatemala and Honduras not flow through corrupt national governments–or we are merely rewarding those regimes with additional funds. All protectionary measures–such as bodyguards–mandated by the Inter-American Commission on Human Rights for individuals and groups that have received threats should be provided immediately.

Finally, U.S. trade and economic policies, including CAFTA and international development loans, should be deeply reevaluated to ensure they do not further contribute to poverty and job loss through privatizations, unfair competition, and the displacement of small farmers and indigenous communities.

First, if the U.S. really wants to improve the economic circumstances of families in Central America and reduce violence, then it needs to work with the communities and people that it intends to help.  U.S. policymakers have historically developed Central American aid policies without consulting the people for whom the aid is ultimately intended.  Integrating these perspectives is a tall order, especially for bureaucratic federal agencies, but it is the only way to craft effective, long-term solutions that have community buy-in and accountability, and that reflect an understanding of the structures, systems and relationships that can affect aid’s effectiveness.

Secondly, let’s be honest about the strategic reasons for creating foreign aid interventions.  Foreign aid does not derive from a solely humanitarian impulse.  Policymakers should be transparent about the full spectrum of goals they seek to advance through aid and make sure that other policies, including trade policies, coherently operate to meet these objectives.  Poverty and weak governance create environments where organized crime can flourish.  Policymakers must address both, and this may involve making tough decisions when other U.S. policies involving the region (like trade policies, for instance) work against the purported goals of U.S. aid.