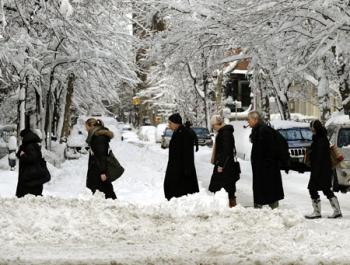 LET IT SNOW: New Yorkers trudge through the snow and temper their resolve on their way to work late last month. (Timothy A. Clary/Getty Images)
Opinion

The Nor’easter: Our Nation’s Valley Forge

Evan Mantyk
biggersmaller
Print
It has been a historically snowy winter thus far, giving New York City, where I work every day, its snowiest January in recorded history and dropping a record-breaking 19.5 inches of snow on Chicago's O'Hare International Airport.

The massive storm that blanketed the country earlier this month led to massive flight delays and cancellations, blackouts, and sometimes-impossible driving conditions. Meanwhile, as I write this, another massive snowstorm is rolling through the nation again.

As I was walking to the train recently, in a deep trench created by snow piles on either side, a unique feeling came over me. At first, I felt like Luke Skywalker in the first act of “The Empire Strikes Back.” After the movie magic wore off, I was simply awed at the incredible amount of snow.

As I do with everything in life, particularly the massive, historic events, I am tempted to read into it. What does it all mean? If the weather was warm and there was this much precipitation, would I be paddling to work?

My fears were only increased when I read about the superstorm hypothesis released by the U.S. Geological Survey (USGS) last month.

USGS scientists found that a superstorm could potentially cause widespread damage throughout California. In a scenario they say is plausible, up to 10 feet of rain could be dumped. It would cause extensive flooding, resulting in more than $300 billion worth of damage.

The USGS eerily dubbed the superstorm “ARkStorm” after the Biblical story of Noah’s Ark. As the story goes, the ark was a giant boat that saved Noah’s family and a variety of animals as it rained for 40 days. Strangely enough, the hypothesized ARkStorm would also last 40 days.

Sound farfetched? It’s not. The ARkStorm is modeled after real floods in California in 1861 and 1862.

On Jan. 19, 1862, author William Brewer wrote: “The great central valley of the state is under water—the Sacramento and San Joaquin valleys—a region 250 to 300 miles long and an average of at least twenty miles wide, or probably three to three and a half millions of acres!”

Ancient stories of massive floods abound in a wide variety of cultures. Or, simply look at news footage from floods in Australia, Brazil, and Pakistan over the last half -year.

Logistically, I think it would be terribly chaotic for Americans to attempt something like that.

Figuratively, however, if a giant flood is coming and your property and possessions are in the path of destruction, then higher ground is the only way to go. Losing everything you have is a quick way of realizing that in life there are so many material things and services that you begin to associate with who you are, but that really have nothing to do with you in the long run.

Of course, I say that but I haven’t personally lost anything in a flood yet.

Perhaps, more down to earth than a flood narrative, the most useful narrative for this relentless winter weather may be a Valley Forge narrative. That place where early American troops and Gen. George Washington spent a horrible freezing, starving, and diseased winter.

Some died, but those who lived were tempered by the harsh conditions and were prepared to win their freedom.

USHistory.org writes: “Most important, it was at Valley Forge that a vigorous, systematic training regime transformed ragged amateur troops into a confident 18th century military organization capable of beating the Red Coats [British troops] in the open field of battle.”

I say, let it snow! When spring finally does come, we will have that much more resolve in whatever we do.