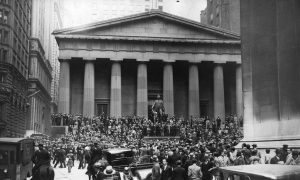 What's Good About the US Constitution?
0 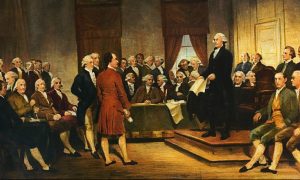 Amending the US Constitution: A Basic Guide
0 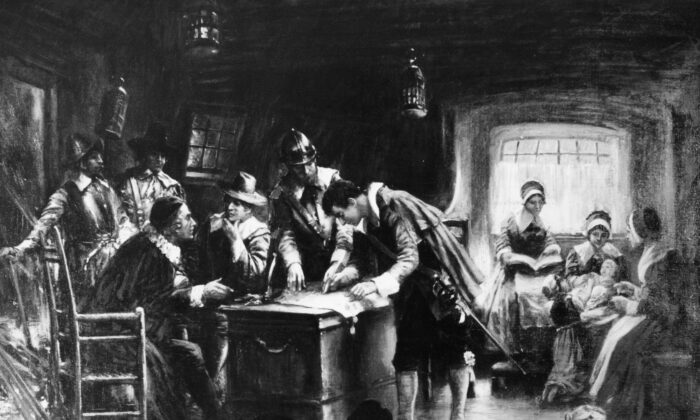 '9th November 1620, Signing the Mayflower Compact' by Edward Percy Moran (1862-1935). Aboard ship the pilgrims are signing an agreement for temporary government of the colony by the will of the majority. (Three Lions/Getty Images)
Viewpoints

The year 2020 marks the 400th anniversary of the Mayflower Compact. The agreement, signed by 41 Pilgrim Fathers in 1620, was the first in a series of documents memorializing deliberate self-government in America.

Self-government is at the heart of the American experiment. Historically, it’s far more important than some other institutions (such as slavery) that have received more attention recently.

Although there were limited efforts in ancient Greece, self-government was perfected in America. Perhaps more than any other institution, freedom and self-government have defined this country. They continue to inspire and motivate people throughout the world: Observe the prominence of U.S. flags these days among the brave people of Hong Kong.

The Mayflower Compact founded Plymouth Colony, the second permanent settlement in the original 13 states. By signing it, the parties did two things: First, they set forth their common goals: “the Glory of God, and advancements of the Christian faith, and the honor of our King and Country.”

Next, to accomplish their goals, they agreed to “combine ourselves together into a civil body politic … and … enact … such just and equal laws … as shall be thought most meet [appropriate] and convenient for the general good of the colony; unto which we promise all due submission and obedience.”

In other words, the signatories agreed to establish laws by common consent, and then to obey them.

Over the following century, many other settlers in America followed the Pilgrims’ lead. They created new governments by common consent in territory that was either uninhabited or lightly inhabited. Pre-Independence illustrations include Massachusetts Bay Colony (1629), Rhode Island and Providence Plantations (1636), adoption of the Fundamental Agreement of New Haven Colony (1639), adoption of the Fundamental Orders of Connecticut (1639), and creation of the New England Confederation (1643).

In colonies outside New England, the basic law was written in Britain by the colonies’ sponsors. William Penn, for example, composed a Charter of Privileges and Liberties (1701) for Pennsylvania. But the existence of popular governments in New England ensured that even plans for American colonies written elsewhere had to be sufficiently free and democratic to attract settlers.

While there were attempts to stifle the American desire for freedom and self-government, they were unsuccessful. When the sponsors of Carolina (consisting of what is now both North and South Carolina) adopted aristocratic “Fundamental Constitutions” (1669), their colony failed to attract enough immigrants. The aristocratic plan had to be replaced by more democratic schemes. In 1686, the British king imposed an autocratic “Dominion of New England”—but it lasted only three years before the colonists rebelled and overthrew it.

When the Crown and Parliament began a more systematic effort to suppress American self-rule, the result was the Declaration of Independence (1776). Like the Mayflower Compact, the Declaration affirmed national goals and adopted principles of self-governance: “to secure these rights, governments are instituted among men, deriving their just powers from the consent of the governed.”

Yet another government created by consent emerged in 1777: the new Republic of Vermont, which voluntarily joined the United States 14 years later.

During the years 1787–90, Americans ratified a new federal Constitution, in what then was probably the most democratic national decision-making procedure in history. In all states, even men of modest means could vote for delegates to the state ratifying conventions. In some states, the electorate included women and free African Americans.

A much-discussed part of the new Constitution was a provision (Article V) allowing the people to control their own government through constitutional amendment. One provision enabled the people to bypass even elected federal officials by permitting their state legislatures to trigger a convention for proposing amendments.

Constitutional amendment eventually produced a Bill of Rights, emancipation for the slaves, and full citizenship rights for all.

The Mayflower Compact tradition of migrating to uninhabited or lightly inhabited areas and creating new governments by consent continued throughout the settlement of the American West. The best-known example may be the Republic of Texas (1836), but there were many instances on smaller scales. As some scholars have documented, long before federal officials were able to establish control over a territory, miners and other settlers frequently had erected effective democratic institutions of their own.

Slavery was, of course, also important in American history. But it was nowhere near as central as the theme of self-governance initiated by the Mayflower Compact. Most of the American settlements formed by popular consent lay in states that entirely or largely rejected slavery. And as time went on, those states became far more populous and prosperous than those with slaves. As a result, even at slavery’s height (about 1860), slaves composed less than 13 percent of the American population. Their owners represented less than 8 percent.

That is why freedom eventually overwhelmed servitude.

Yes, we do well to honor the Mayflower Compact.

The Text of the Mayflower Compact

Having undertaken, for the Glory of God, and advancements of the Christian faith, and the honor of our King and Country, a voyage to plant the first colony in the Northern parts of Virginia; do by these presents, solemnly and mutually, in the presence of God, and one another; covenant and combine ourselves together into a civil body politic; for our better ordering, and preservation and furtherance of the ends aforesaid; and by virtue hereof to enact, constitute, and frame, such just and equal laws, ordinances, acts, constitutions, and offices, from time to time, as shall be thought most meet and convenient for the general good of the colony; unto which we promise all due submission and obedience.