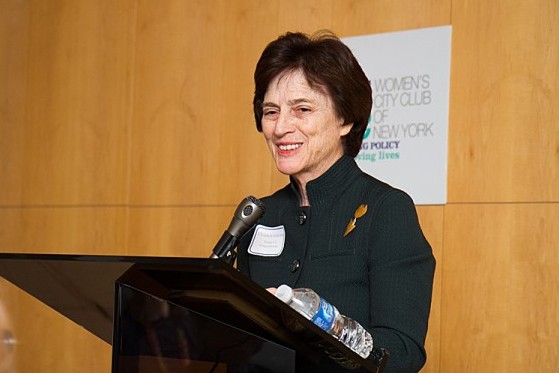 Former New York City Comptroller Elizabeth Holtzman shares her experiences in the office from 1990 to 1993 at a Women's City Club of New York event on Thursday. (Benjamin Chasteen/The Epoch Times)
US

The Long Reach of NYC Comptroller

NEW YORK—Elizabeth Holtzman learned during her tenure as New York City’s only female comptroller that the office has the power to rectify inequalities on an international scale.

During her time in office 1990–1993, she fostered women and minority-owned businesses in the city, but also used her influence over the city’s national and foreign investments to support equality abroad.

For example, when Ford Motor Company’s facilities in Northern Ireland refused to hire Catholics, she pressured the company to revoke this policy. New York City was a major stakeholder in the company.

“The comptroller’s office has a variety of functions,” said Holtzman as she discussed the role of comptroller with the Women’s City Club of New York last Thursday. “It is primarily a fiscal office, but as you know, money has a way of creeping into all kinds of very important issues,” she said.

Holzman listed the comptroller’s main duties: to comment on the city budget, sell bonds to fill temporary budget gaps for the city, convince raters that those bonds are good, and oversee pension investments for city workers.

Pension funds especially give the comptroller some influence in national and international matters, noted Holtzman. “City pension funds owns stock in every single [major] company there is in America.”

When Exxon had a large oil spill in Alaska during her term, Holtzman teamed up with the California comptroller and held a meeting with Exxon’s president.

She recalled her demands of the president: “We are major shareholders and we want to know what you are going to do to prevent this from happening again.” She noted that a similar course of action could and should have been taken after the BP oil spill in 2010.

Holtzman refrained from commenting on the effectiveness of New York City’s current comptroller, John Liu, who has been embroiled in campaign fraud allegations for his 2013 mayoral campaign.

She did, however, hold up campaign finance transparency and accountability as a staple value in American politics throughout her speech.

Holtzman was a congresswoman during Watergate and participated in the judiciary committee’s review and reforms. Holtzman said lawmakers had three goals in the Watergate aftermath: the first, to hold the president accountable; the second, to have a special prosecutor if allegations did come against future presidents; the third, to make campaign fundraising more transparent, since illegal campaign contributions were used to pay the Watergate burglars.

Before serving as comptroller, Holtzman was the Kings County district attorney for two terms from 1981 to 1989—the only female DA in the city to date. From 1973 to 1981, she served as congresswoman for New York’s 16th District. At the age of 31, she was, and remains, the youngest woman to ever enter Congress. While in Congress, she earned national recognition for her role on the House Judiciary Committee during Watergate, and for her role in bringing Nazis who immigrated to America to justice.

She is currently an author.

With reporting by Benjamin Chasteen