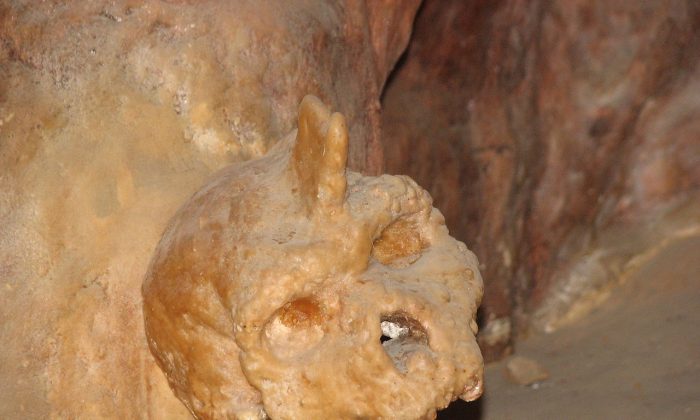 The Petralona skull, covered by stalagmite in the Petralona cave in Greece. (Wikimedia Commons)
Beyond Science

The Human Skull That Challenges the Out-of-Africa Theory

This is the account of the discovery of a skull that has the potential to change what we know about human evolution, and a suppression and cover-up which followed.

In 1959, in an area called Chalkidiki in Petralona, Northern Greece, a shepherd came across a small opening to a cave, which became visible when a thick covering of snow finally melted.  He gathered a group of villagers to help him clear the entrance so they could go inside and explore.  They found a cave rich in stalactites and stalagmites. But they also found something surprising – a human skull embedded in the wall (later research also uncovered a huge number of fossils including pre-human species, animal hair, fossilized wood, and stone and bone tools).

The skull was given to the University of Thessaloniki in Greece by the President of the Petralona Community. The agreement was that once the research was done, a museum would be opened featuring the findings from the Petralona cave, and the skull would be returned to be displayed in the museum – something that never happened.

The Petralona skull on display at the Archaeological Museum of Thessaloniki. (Wikimedia Commons)

Dr Aris Poulianos, member of the UNESCO’s IUAES (International Union of Anthropological and Ethnological Sciences), later founder of the Anthropological Association of Greece, and an expert anthropologist who was working at the University of Moscow at the time, was invited by the Prime Minister of Greece to return to Greece to take a position of a University Chair in Athens.  This was due to the publication of his book, ‘The Origins of the Greeks’, which provides excellent research showing that Greek people didn’t originate from the Slavic nations but were indigenous to Greece.  Upon his return to Greece, Dr Poulianos was made aware of the discovery of the skull at Petralona, and immediately started studying the Petralona cave and skull.

The ‘Petralona man’, or Archanthropus of Petralona, as it has since been called, was found to be 700,000 years old, making it the oldest human europeoid (presenting European traits) of that age ever discovered in Europe. Dr Poulianos’ research showed that the Petralona man evolved separately in Europe and was not an ancestor of a species that came out of Africa.

What an Ancient Jawbone Could Tell Us About Human Evolution (Video)

In 1964, independent German researchers, Breitinger and Sickenberg, tried to dismiss Dr Poulianos’ findings, arguing that the skull was only 50,000 years old and was indeed an ancestor that came from Africa.  However, research published in the US in 1971 in the prestigious Archaeology magazine, backed up the findings that the skull was indeed 700,000 years old.  This was based on an analysis of the cave’s stratigraphy and the sediment in which the skull was embedded within.  Further research in the cave discovered isolated teeth and two pre-human skeletons dating back 800,000 years, as well as other fossils of various species.

Today, most academics who have analyzed the Petralona remains say that the cranium of the Archanthropus of Petralona belongs to an archaic hominid distinguished from Homo erectus, and from both the classic Neanderthals and anatomically modern humans, but showing characterists of all those species and presenting strong European traits.  A skull dating back 700,000 which is either Homo sapien or part Homo sapien is in direct conflict with the Out of Africa theory of human evolution.

Further excavations continued in the cave of Petralona with the participation of international researchers (46 specialists from 12 separate countries), which provided further proof of Dr Poulianos’ claims, including remarkable findings like fossilized pieces of wood, an oak leaf, animal hair and coprolites, which enabled accurate dating, as well as the almost continuous presence of stone and bone tools of the Archanthropus evolutionary stage, from the lower (750,000 years) to the upper (550,000 years) layers of sediment within the cave.

The research, after an interruption due to the dictatorship in Greece, continued up to 1983. It was then ordered by the government that all excavations at the site were forbidden to anyone, including the original archaeological team, and for 15 years nobody had access to the site or to the findings – no reason was provided by the government.  Was this denial of access to prevent the extraction of whatever new scientific conclusions remained hidden within the incredible fossils embedded within the layers of the caves’ walls?

After the Anthropological Society of Greece took the case to the courts, 15 years later they were again allowed access to the cave.  Since then the Ministry of Culture is trying in any way to overcome the Courts decision and further trials proceed.

Dr Poulianos’ findings contradicted conventional views regarding human evolution and his research was suppressed.  Dr Poulianos and his wife were physically attacked and injured in their home in 2012 and the culprits were never been found. He and his team have been denied further access to the cave to complete their research and study, and the whereabouts of the skull is now unknown.

Today a sign sits outside the cave of Petralona stating that the skull found in the cave was 300,000 years old, and on Wikipedia today you will see references dismissing the evidence and trying to date the Petralona skull within acceptable parameters – between 160,000 and 240,000 years old.

Recently, Professor C.G. Nicholas Mascie-Taylor of the University of Cambridge sent a letter to the Ministry of Culture in Greece saying that the correct date of the skull is 700,000 years old and not 300,000. He has also challenged the government’s suppression of information regarding this incredible discovery.