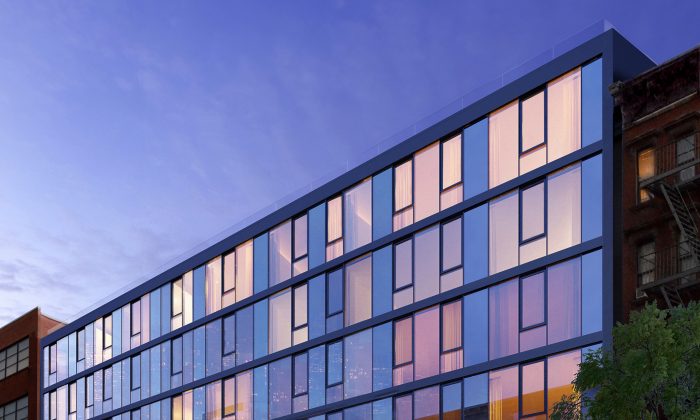 A rendering of the exterior of 540 West, in the Hell’s Kitchen neighborhood of Manhattan. (Croteau Design)
NY Real Estate

The Heart of Hell’s Kitchen

NEW YORK—The once landmarked, low-rise, and largely industrial neighborhood of Hell’s Kitchen is quietly becoming a hub of luxury living.

Amenity-filled high-rise rentals like the MiMa Tower and the Silver Towers have sprouted up in the last few years as the developers in the area commit to the city’s 80–20 market-rate and affordable housing split to build taller buildings.

But the area hasn’t seen that many new condos constructed compared to other trending neighborhoods, which is creating excitement for the few for-sale projects in the area.

The developers of 540 West, Fortis Property Group, and Wonder Works Construction Corp., were determined to create a “market-maker” with their 114-unit development.

“We are delivering to the marketplace a high level of quality and finishes at a price point that generally isn’t seen these days,” said Stephen McArdle, 540 West project manager.

McArdle, an associate broker at Halstead Property Development Marketing, said the group had been very conscious of creating a sense of community in the building, with ample privacy, light, and air.

“We paid particular attention to the amenities and shared spaces where the owners could create an environment that would make the building very strong, both now and going forward,” McArdle said.

Residents enter the seven-story building through a split-level lobby with a recessed fireplace in the lounge area. The two-building development, connected by a central courtyard and open-air breezeway, spans the block from 48th Street to 49th Street.

The landscaped courtyard provides residents with a fire pit and open-air movie screening area, and the furnished roof deck provides additional space to socialize and entertain. A number of residences have private terraces and roof access as well.

“It’s just such a comfortable space, one which based on the reactions of the buyers they would certainly utilize,” McArdle said.

The units range from $665,000 to $2.8 million. Each unit boasts white oak floors, floor-to-ceiling windows, and touches like custom built-in wardrobes to give the properties a modern, European feel, McArdle said.

“No new developments south of 96th Street are trading at this competitive price point,” McArdle said.

McArdle said the team recognized the anticipation from the residents of Hell’s Kitchen and other nearby neighborhoods as the buildings went up.

Many of the buyers are coming from nearby, McArdle said. Some were previously renting and were already well aware of the neighborhood’s transformation. New retail is popping up left and right in the neighborhood, he added.

“People are extremely excited about both the public and private investment being made in the Hell’s Kitchen neighborhood, and the area’s future, namely the subway,” McArdle said.

The developers decided on the site after looking at a comparable site developed prerecession.

“We started looking in 2010,” said Jonathan Landau, Fortis Property Group CEO. The other property was a block and a half away, and contracts had fallen out after the recession. In 2010, the property started reselling again right away, and the pricing stayed neutral. “That gave us the insight that the market was fundamentally strong and Hell’s Kitchen would be a great location to develop.”

“We had seen so much of the vintage development product, the 2005–2008 buildings that weren’t going to be market makers because they were just plain vanilla,” Landau said.

The team takes a very neighborhood-oriented approach, Landau said. As a private company Fortis has the flexibility to be opportunistic about their decisions. In addition to developing in New York City, Fortis has a focus in office properties throughout the United States in locations like Boston, Connecticut, and Dallas.

“We don’t cut corners,” Landau said. “We’re just not one of those institutional buyers that will pay a premium to be able to get a hold of a site, and then try to cobble through the development process and make a dollar at the end of the day.”

As land and construction prices go up, development is getting more challenging in the city. A good chunk of the projects underway are ones that started prerecession.

And now with the rising competition, it’s necessary to look at projects that are more difficult, with higher barriers of entry, Landau said. The group is in Brooklyn Heights and North Williamsburg, and is actively looking in other neighborhoods in Manhattan and Brooklyn’s western waterfront.

“We’re looking at larger, more sophisticated development projects, and when we get them, we’ll continue to have our hands full for the next couple of years on the development side.”