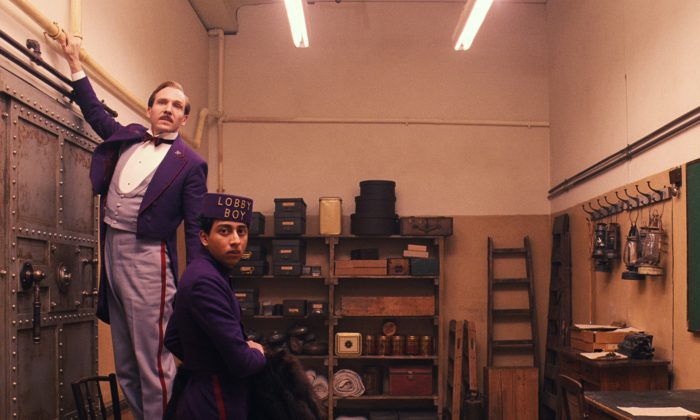 ‘The Grand Budapest Hotel’: Much Ado About Nothing Important

He had the reviewer at “Fantastic Mr. Fox” and “Moonrise Kingdom.” With “The Grand Budapest Hotel,” not so much. In fact, not at all.

Opening shot: A girl (Saoirse Ronan) goes to the grave of a deceased writer.

Tom Wilkinson (as the voice of the deceased writer) tells the story of when, as a younger man (played by Jude Law), he stayed, briefly, at the Grand Budapest Hotel.

Said hotel is very reminiscent of the one in “The Shining,” a former (in this case, 1930s) glitterati hangout, now fallen on hard times but still sparsely populated with eccentric holdouts.

The only difference is that this pre-war hotel is a classic Anderson-style painting of a fictitious dollhouse-like hotel, high up in some fictitious alps, in the fake “former Republic of Zubrowka,” reachable only by a tiny fake train.

One of said eccentric holdouts is owner Mr. Moustafa (F. Murray Abraham), whom the writer meets in a Russian-bath styled setting.

With much old-school etiquette, decorum, and demurring, they decide a dinner date to discuss the (deadly boring) details of Mr. Moustafa’s life.

Turns out, Moustafa had been a lobby boy named Zero (Tony Revolori). Zero sported a pencil-moustache that he drew on with a pencil.

Gustave’s glitterati-leech decadence lurks beneath the surface. His impeccable politeness, like predatory camouflage, glosses over a rotting immorality.

He preys on ancient heiresses (invariably blondes), and therefore gets snagged in a murder investigation involving his favorite guest, Madame D. (Tilda Swinton).

He claims he loved her, but there would also appear to be some suspicious inheritance shenanigans going on. He takes Zero with him and hightails it to her mansion.

He’s blamed for her death by police chief Henckels (Edward Norton), who has ancient issues of his own with the predatory Gustave. Please don’t ask.

There’s a ski and toboggan chase through the alps! Is it exciting?! No, not really. Not for adults.

You have to be a fan of the effete to appreciate, or rather, to stomach, a concierge’s lecture about lobby boy-ing as a calling.

However, if you ever worked in the restaurant business in a day-job capacity, you will likely be as prone as the reviewer to getting hives from such things as waiter staff-meetings, presided over by persnickety Mr. Gustave H. types.

What works well as whimsy in the children’s films morphs into camp in the adult ones. Not that camp is bad. Camp is great when it’s funny, like certain clips of “The Rocky Horror Picture Show,” but nothing here is funny. It’s mostly quaint or cutesy, which renders any tension (and therefore sustained interest) ineffective.

Of course, Anderson being Anderson, there’s a flash of genuine humor here and there, and one always appreciates his favorite thing, which is silhouetted characters high-tailing it across the horizon in “Run away!” (Monty Python) fashion.

However, all in all, there’s an inability of the mind to retain memory of any one character, plot point, or action sequence, thus begging the question—what’s the point of all this silliness?

Is it social commentary on the obscure time in Europe, between world wars, when high-society folks went to places like the Grand Budapest Hotel? Really? Who cares about that?

Any lessons to be learned? If you go and discover some, please email the reviewer.