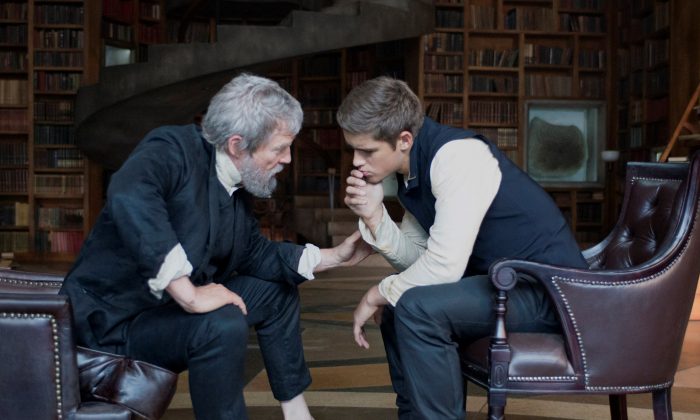 ‘The Giver’: ‘The Dude’ in a Depressing Dystopia

Depression’s a fact of human existence, but we’ve become fed up with it. Big Pharma dumps mountains of mood stabilizers and tranquilizers on the masses. Sad’s considered bad; suppressed—best. But suppression is clearly not getting the job done anymore. Just read the headlines.

Weed’s everywhere now; more and more people are routinely baked. Those who haven’t found any bliss drift from reality. Those who’ve found their bliss drift too.

It’s because regardless of profession and bliss levels, no one’s ever had three good days in a row, and instead of learning to sit with our emotional discomfort, we’ve become a “Nurse Jackie” society.

The fable film “The Giver” might have been more aptly titled “The Paxil Movie” (or Prozac, Klonopin, Vicodin, Diazepam, Valium, Lithium, etc., etc.). It first postulates why an all-out drug-topia is our best solution to the human havoc brought on by “bad” emotions, but then it ultimately lets us know why that would never work. The story of that society, however, is annoying.

Young Jonas (Brenton Thwaites) is a contented teenager living in a colorless community where everyone conforms, doesn’t compete, and lives in a white cube.

No one feels anything, due to a daily, mandatory, wrist-injected dose of emotion-incapacitating drugs administered via a white, hypodermic version of the Staples Easy Button. Then the medicated masses jump on their white Citi Bike-type bikes and go easy-skanking about their emotionless day.

Graduation day arrives; it’s a community-wide rite of passage where young people get assigned their professions by the elders. Friends of Jonas get “drone pilot” and “nurturer.”

Jonas, however, has been a little bit clairvoyant all his life, and the elders know it, since they monitor everything the way Facebook and smartphones track everybody’s details.

Meryl Streep’s stepfordian Chief Elder (in a silver fright-wig) cybersnoops and barges into your house holographically like a convent abbess, saying, “I apologize for the intrusion.”

No she doesn’t apologize. And neither do all the minions accept it when they say, “We accept your apology.”

Anyway, with his clairvoyant gift, Jonas lands the exclusive job of Receiver of Memories. He is given these memories by … The Giver.

That would be Jeff Bridges. The Dude giveth. Jonas gets memories downloaded by holding hands with the Dude, er, Giver. Not as bad as it sounds.

As the newest keeper of memories from before the Armageddon-like “Ruin” that precipitated the mood-suppressant lifestyle he grew up with, Jonas finds out that the world he just grew up in is a bunch of malarkey.

The real reason the elders hide the fact of human emotions is to banish shocking Vietnam War images from people’s heads. Or Tiananmen Square’s “Tank Man,” or elephant-poaching images. Meaning there’s no anger, fear, shame, jealousy, or other bad emotions.

And while the Giver abides, he’s fed up with the fakeness. He’s an old hippie at heart. This is, after all, the Dude we’re talking about.

Once Jonas has cottoned to the hidden violence behind the elder-enforced sameness, Jonas and the Giver all but have a Bob Dylan moment: “There must be some kind of way outta here said the joker to the thief.” No one’s gotten out yet.

The whole premise of “The Giver” is inherently annoying. The post-Ruin community displays the kind of passive-aggressive guilt tripping and ultra-politically correct chastising (using elder-defined lingo) that some “spiritual communities” wallow in. Think “Witness.”

But this is not a spiritual community; it’s a drug community. It seeks much the same things as a spiritual one but fails to see the parallels or, more importantly, the irony.

Meditation, traditionally, is how one achieves bliss sans numbness. Mood drugs kill both depression and passion, but passion is what makes human life worth living.

One has to take the good with the bad, so having passion means learning to tolerate depression. It’s hard to develop patience and tolerance for depression in our instant-gratification society.

The moral of the movie is that you can’t live like a society of gods by taking mood-stabilizers. An easy button is no substitute for a hard meditation mat.

The three well-cast young leads, Brenton Thwaites, Odeya Rush, and Cameron Monaghan, are newcomers; Thwaites is a star in the making.

Streep and Bridges have never worked together (how is that possible?), but the film doesn’t give these two powerhouse actors emeritus much to work with.

The first third of the film is shot in black and white to symbolize the lack of emotional color. Unfortunately, that puts the viewer in a state of passionless viewing. “The Giver” is no “Casablanca” classic.

Katie Holmes plays a classic “drank the Kool-Aid” mommy whose table-manner mantra is “Precision of language!” Apparently, Taylor Swift is supposed to be in there somewhere too. Missed her. The reviewer suggests you take it a step further and miss the whole movie. Unless the novel was a middle-school favorite, and you feel obliged to see the film adaptation.