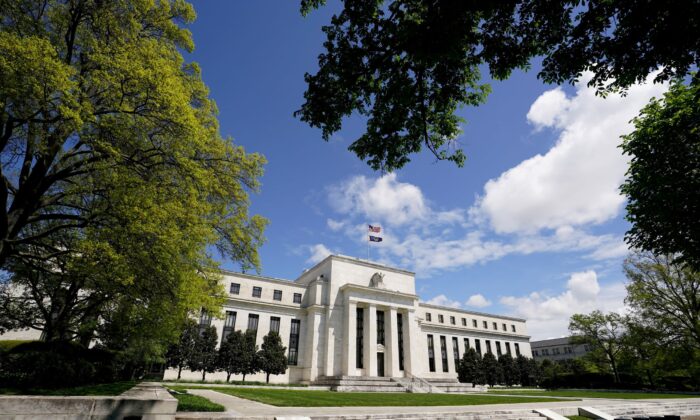 The Federal Reserve building is set against a blue sky in Washington, D.C., on May 1, 2020. (Kevin Lamarque/Reuters)
Business Columnists

In 1977, I co-authored the book, “Winning With Money,” explaining the relationship between the money supply and stock prices. Our work confirmed that while money supply changes affect the economy six to nine months later, the lag is much shorter for stock prices.

Understanding this relationship between money and stock prices is essential for investing in stocks.

In recent decades, watching the money supply has fallen out of favor. Ironically, Federal Reserve officials, who control the nation’s money supply, seem to have the least interest in money.

Fed Chairman Jerome Powell has forcefully dismissed the importance of the money.

“There was a time when monetary policy aggregates were important determinants of inflation, and that has not been the case for a long time,” he said in his testimony to Congress on Feb. 24, 2021. Powell readily admits the money supply isn’t a key factor in the Fed’s policy decisions; instead, Fed officials use interest rates as their main guide to policy.

Ignoring the money supply is the biggest mistake both the Fed and stockholders can make. Here’s why:

The Fed controls the amount of money with purchases or sales of securities, usually Treasury bills. As the Fed buys securities, it increases the demand for those securities, which drives up their prices, lowering their interest rates.

The Fed’s power to create new money is directly related to how it pays for the securities it buys. Since the Fed is the bankers’ bank, it pays for securities by adding a credit to the account of the bank through which the securities were purchased. The transaction involves nothing more than an accounting entry, one that produces a net increase in financial assets.

The reverse occurs if the Fed sells securities. That drains money from the economy and puts downward pressure on asset prices, including stocks, while driving up interest rates.

One such institutional change occurred in 2007, when the Fed altered its approach to managing the money supply. Prior to the change, the Fed bought securities as usual. From 2001 to 2006, it purchased an average of 5 to 6 percent more securities each year. This was followed by normal 5 to 6 percent increases in spending (current-dollar GDP) each year.

By the end of 2007, the Fed’s holdings of securities were unchanged for the year. Hence, in an economy with spending growing by 5 to 6 percent, the Fed had halted the growth in the supply of high-powered money. By January of 2008, seven months after the Fed began selling securities, the economy entered a recession.

With the economy clearly weakening, the tradition and logical solution was for the Fed to resume purchases of securities, making more money available.

It didn’t happen. Instead, the Fed turned tradition and logic upside down. In what was to become its worst policy move since 1929, the Fed aggressively sold securities, draining money from the economy.

By July 2008, the Fed had sold more than $300 billion, or 40 percent of its securities. The sales brought the Fed’s holdings of securities (and therefore high-powered money) back to where it had been in 1999—nine years earlier! This was the most dramatic collapse in high-powered money since 1929. What followed was the worst financial crisis since 1929.

Policy was so inept because the Fed ignored what it was doing to high-powered money, the most potent of monetary aggregates. In late 2007, the Fed dropped its key interest rate to zero percent and then-Chairman Ben Bernanke said the Fed had done everything in its power to help the economy. The stock market and the economy continued to spiral downward.

It wasn’t until February 2009 that the Fed began any meaningful purchases of securities. Within a month of those purchases, the stock market reversed its downward spiral. By July, the economy began an economic recovery. With the help of a massive expansion in purchases, monetary policy contributed to the bull market in stocks that would last for the next 12 years.

Am I suggesting that the Fed caused the financial crisis by reducing the amount of high-powered money by 40 percent? Yes! It’s precisely what I’m saying.

I’ve been asked, “How it’s possible for the Fed to make such a colossal mistake and escape blame?”

The answer seems to be that while the Fed may not be very good at managing money, it has a marketing department that is out of this world.

To this day, the Fed provides no clue that it learned anything from what happened in 2008. Instead of focusing on high-powered money, the Fed continues to ignore monetary aggregates and cogitates over interest rates.

Powell insists the Fed’s artificial manipulation of interest rates is the most effective way to control monetary policy. It’s not. The recent surge in inflation shouldn’t have been a surprise. It was only a surprise to the Fed and others who believe money no longer matters.

Major changes in high-powered money provided valuable early clues to selling stocks in early 2008, prior to most of the crash in the market. They also provided early clues for buying stocks back in the spring of 2009, prior to the bull market of the past 12 years.

The current effect of high-powered money on stock prices is the topic of my next article.