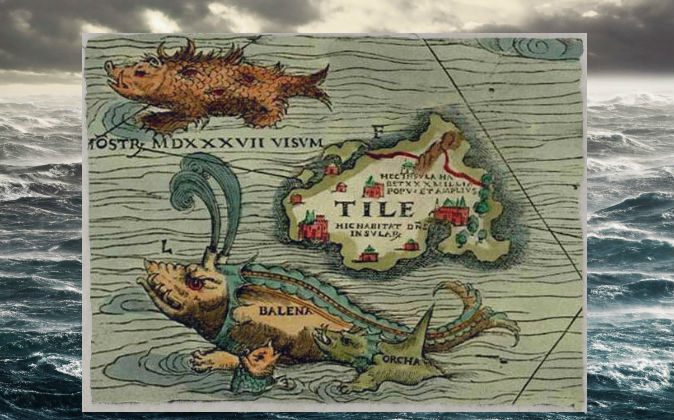 A portion of the Carta Marina by Olaus Magnus, 1539. (Wikimedia Commons)
Beyond Science

The book “Sea Monsters on Medieval and Renaissance Maps,” published by the British Library last year, charts the evolution of iconic sea serpents, mermaids and other mythical creatures found on world maps from the 10th century through to medieval and Renaissance times.  Despite their wild appearance, most of the creatures were based on true encounters with sea animals, shedding light on how mythology and folklore can evolve from real events.

Chet Van Duzer’s “Sea Monsters on Medieval and Renaissance Maps” depicts a range of ‘sea monsters’ which cartographers used to illustrate mysterious, unexplored regions of the globe and the possible dangers of seafaring. Many have assumed that these mythical creatures were the results of illustrators having a bit of fun or exerting their imagination in their work. However, many of the ocean’s creatures, including whales, walruses and squid were rarely seen and were considered monsters in medieval and Renaissance times.

“The creatures look purely fantastic. They all look like they were just made up,” Van Duzer, a map historian at the Library of Congress, said in a talk about his book. “But, in fact, a lot of them come from what were considered, at the time, scientific sources.” For example, it was quite usual for the encyclopedias of the time to contain reference to strange looking terrestrial-aquatic-hybrid animals and mapmakers just took some poetic license in depicting them.

One example of a real sea creature being transformed into a legendary beast is that of the Kraken. It is a giant sea creature in Scandinavian mythology which was said to be 1 mile long. It was depicted as great beast that would attack ships and was so huge that its body could be mistaken for an island. It is first mentioned in the Örvar-Oddr, a 13th century Icelandic saga.

The Kraken was also mentioned in the first edition of Systema Naturae [1735], a taxonomic classification of living organisms by the Swedish botanist, physician, and zoologist Carolus Linnaeus. He classified the Kraken as a cephalopod, designating the scientific name Microcosmus marinus.

The myth of the Kraken is believed by historians and scientists to relate to the giant squid, which can reach 18 meters in length and has been rarely seen by humans as it lives the very depths of the ocean.

By tracing the depictions of sea monsters throughout the centuries, Van Duzer presented an evolution from a world full of dangers lurking in distant oceans where gigantic octopuses and whales drag ships and sailors into the sea, to 17th century maps showing ships exerting dominion over the beasts of the ocean.  Eventually, the beasts disappeared from maps altogether.

The important message to take from Van Duzer’s fascinating depiction of sea monsters is that mythological stories and legends of the past are unlikely to be purely fanciful stories stemming from overly imaginative minds. Rather, it seems clear that most, if not all, the stories from our ancient ancestors evolved from real events that were portrayed according to the understanding and knowledge of the time.