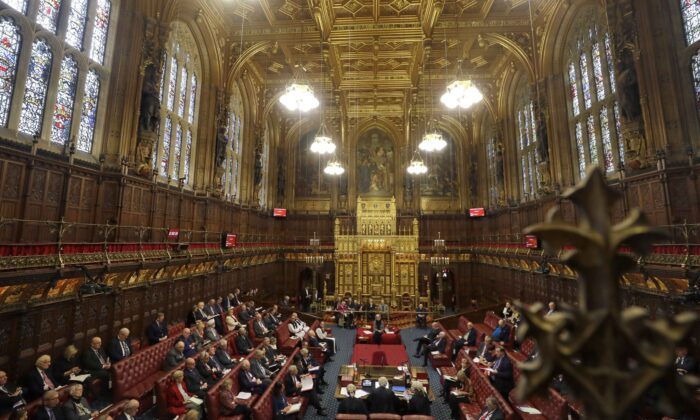 A general view inside the House of Lords as the European Withdrawal Agreement Bill is debated at House of Lords in London, England, on Jan. 21, 2020. (Kirsty Wigglesworth/Getty Images)

What do Brexit and the Hong Kong popular uprising have in common?

Answer: You can trace both back, in part, to the English tradition of parliamentary self-government and liberty under law.

Chris Harlow of England’s Oxford-Brookes University, who served on European Union committees, told me of a fundamental difference between British members and those from France and Germany: When EU commissioners were considering a new regulation they knew would encounter public opposition, the Germans and French plotted how to impose it despite its unpopularity. British members often suggested that if the rule was going to be that unpopular, then perhaps it was unpopular for good reason, and should be reconsidered.

The English political tradition of freedom and self-governance is one of the most potent influences on the modern world. It impacts nations with vastly disparate cultures, and it is preserved among peoples that—being apt pupils—ultimately rejected British rule for self-rule.

For example, the same generation that engineered the American Revolution wrote a Constitution filled with English legal terms and political ideas. The valiant people of Hong Kong received the same inheritance of democratic governance and personal freedom when they were a British colony, and they apparently believe those values are worth fighting for.

Each year, the Heritage Foundation undertakes an exhaustive review of every nation for which adequate data are available and reports on the level of economic freedom in each. It assigns a “freedom score” to each country, and ranks them. Heritage developed the methodology in conjunction with The Wall Street Journal.

Notice that the United Kingdom is on the list, and that seven of the other 14 are former British colonies or dependencies.

The Cato Institute produces a “human freedom index” that ranks nations by overall freedom, including but not limited to economic freedom. Cato’s broader scope necessarily means its index is less precise than that issued by Heritage, but it also is informative.

According to Cato’s 2019 study, the citizens of Hong Kong are the third most free in the world. The top 16 are New Zealand, Switzerland, Hong Kong, Canada, Australia, Denmark, Luxembourg, Finland, Germany, Ireland, Sweden, Netherlands, Austria, the United Kingdom, Estonia, and the United States. (The last two have tied scores.) This index tells much the same story as that of Heritage, and the Cato study notes the high correlation between economic freedom and other forms of liberty.

On this index as well, the UK and her former colonies stand prominently.

Wealthy nations were not the only ones molded by English influence. The English common law serves as the foundation for the legal systems of many nations, including poorer ones, such as Kenya, India, and Bangladesh. Several studies have tracked connections between English common law and freedom and economic growth.

For example, University of Virginia law professor Paul G. Mahoney compared the economic growth of 38 countries whose legal systems were based on English common law with those based on European civil law. (Of course, as a responsible scholar, Mahoney controlled statistically for other influences.) On average, he found significantly more prosperity in common law countries.

Why should English law be associated with more prosperity than European civil law? Researchers have identified several possible reasons. They include the qualifications of judges in each system, comparative financial investment rules, and the degree to which each system contributes checks and balances on political power.

Mahoney concluded that a principal reason was that English common law was associated with political institutions providing greater protection of individual rights against state power.

Much of the credit due to the British (and in this case, we include the Scots and Irish Protestants) arises from their work during the 18th and 19th centuries. That was when the much-maligned British Empire, with its far-flung web of colonies, was at its height: hence the theme of the popular Prager University video, “If you live in freedom, thank the British Empire.”

Britain was the first major country in world history to abolish slavery. Under the leadership of the Scottish-born Lord Mansfield, in 1772, the Court of King’s Bench effectively extinguished slavery in England with its decision in the famous case of Somersett v. Stewart.

“The air of England,” it was said at the time, “is too pure for a slave, and every man is free who breathes it.”

In 1807, Parliament outlawed the British slave trade, and the Royal Navy began to eradicate it on the high seas. (The United States followed suit the following year.) In 1833, the British Parliament abolished slavery itself throughout the entire Empire, as the United States did by constitutional amendment in 1865.

Similarly, in the 18th century, British women already were far freer than those on the European continent; further emancipation came in subsequent years.

In 1787, the House of Commons impeached Warren Hastings, the former governor of Bengal, for maladministration in India. His most famous prosecutor was the Irish-born Edmund Burke. Although the House of Lords eventually acquitted Hastings, Burke’s speeches on the duties of a colonial power—and how Britain had failed in those duties—became required reading for the rising generation of British statesmen.

They responded by converting colonial administration from a purely exploitative enterprise into a public trust: During the 1800s, the British opened schools and hospitals in the colonies, built infrastructure, and prepared their dependencies for self-government to an extent no imperial power ever had done.

Nineteenth-century technological progress laid the groundwork for modern high-technology, and British and American scientists and inventors were at or near the forefront: hence the creation of modern medicine, the development of locomotion (trains, ships, and automobiles), and the taming of electricity.

The English have struggled throughout their history to ensure parliamentary rule and human freedom. Initially, that struggle was against overreaching kings. In modern times it has been against trans-nationalists, socialist demagogues, and the country’s own elite. (Indeed, I know from personal experience that many in the British elite unpatriotically denigrate their country’s contributions.)

This struggle for liberty has been more specifically English than British. The 1979 decision to reject socialism by electing Margaret Thatcher’s Conservative Party was driven mostly by English voters. The mandate to leave the European Union was overwhelmingly the decision of the English grassroots, while “remainers” won majorities in Scotland and in the elite enclaves of Oxford, Cambridge, and London.

By the Brexit decision, the English have defended successfully their tradition of freedom and self-governance. May the people of Hong Kong be successful as well.