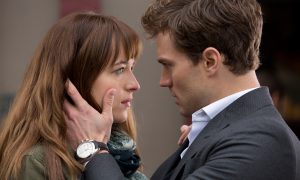 ‘The DUFF’: A Tween Guide to High School

American high school movies are hallowed ground. Every since “American Graffiti,” there’s always been a gaggle of unknown actors in them who go on to become stars: “Fast Times at Ridgemont High,” “Dazed and Confused,” “Clueless,” and so on.

They stick in our collective consciousness because most Americans have high school heavenly-hellish hangouts in their heads that haunt them for life.

While not a brilliant cinema-going choice for a grown man, “The DUFF” will probably perform decently at the box office. If the target audience at the screening was any indication, tween girls will love it. Basically, it’s a makeover movie.

But first things first: What’s a DUFF? It’s a heretofore under-the-radar stereotype, which, due to ingenious American social awareness, humor, and slang-appreciation, has now been isolated, diagnosed, and labeled.

The plump, plain DUFFs are gatekeepers to their thin, hot friends. We’re shown various kinds of DUFFs, most notably the “Political Duff”—Fat Chris Christie standing next to thin Barack Obama. Good visual gag if not an actually valid “exhibit A.”

Of course Brittany Murphy was a camouflaged babe in her own right, and Bianca Piper (Mae Whitman) in “The DUFF” isn’t exactly chopped liver herself, once she cleans up. Which is why this is a makeover movie.

Bianca’s their DUFF. She’s unaware of such a designation. She’s enlightened to the definition of this social category by her neighbor and childhood friend Wesley Rush (Robbie Amell). Wesley’s captain of the football team and boyfriend of the school’s reigning mean-girl, Madison (Bella Thorne).

But Bianca’s got her pride; she’s nobody’s DUFF, and in an amusing scene that sums up today’s high school (to the candy power-chords of Joan Jett’s “Bad Reputation”), she flies into a snit and un-friends her two beauteous besties from all social media sites. From, like, 15 of them.

She goes through a Kübler-Ross-like “five stages of grief of being a DUFF”: 1) denial, 2) anger, and so on. Flashes of insight! She realizes she’d been the Bosely to Jess and Casey’s Charlie’s Angels! Parking among the gleaming beamers and mustangs, she realizes even her car’s a DUFF. Sigh.

High school’s always been hell for the uncool and clique-disenfranchised, but high school in 2015 is a nightmare. As the principal says, “Cyberbullying—it’s like a prison yard out there!” We all know by now (like a certain NFL quarterback) the nightmare of the viral selfie.
Mae Whitman’s kind of a cross between Janeane Garofalo and Linda Cardellini of NBC’s “Freaks and Geeks,” (the now-classic high school series that gave us Seth Rogen, James Franco, and Jason Segel).

Much like “American Pie,” “The DUFF” is basically a teen sex comedy, but instead of R, it’s rated PG-13, meaning it had to tone down the dirty, but not be so goody-goody as to alienate the brazen-beyond-their-years preteen youth of today.

Ken Jeong as a high school journalism teacher could have been otherwise cast. All his scenes are all about him, and ever so slightly and unintentionally creepy in annoying ways, and not because that’s what’s in the script.

Speaking of hashtags, we like the wrap-up sentiment: “No matter what label is thrown your way, only you can define yourself.” We define ourselves as @FilmCriticEpoch.

“The DUFF” is pretty fluff. But it does function as a cinematic guide to high school for the socially adrift. High school is very much like the prison yard; it pays to know the unwritten laws and find refuge in your peer group. The movie does a good job of portraying the pockets of severe isolation and depression that exist like landmines throughout high school for jock, jock-concubine, mathlete-geek, princess, DUFF, cheerleader, stoner, goth, band-camp nerd, hacker, and metal-shop dude alike.

It’s not a high school movie on par with “Clueless,” but the message is ultimately quite positive. Bianca is eventually able to own her outsider status and grasp that it’s because she’s intellectually far superior to her peers. Which then allows her to face down the mean-girl faction with understanding and, believe it or not, compassion. Maybe it should be a freshman prerequisite.