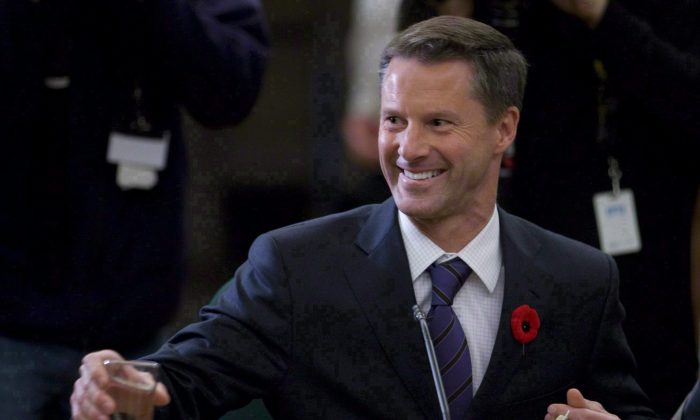 Every year Epoch Times takes a look back at the biggest news stories that grabbed the attention of the entire country. This year, Toronto Mayor Rob Ford made headlines around the world and a handful of senators managed to make abolishing the Senate an idea with traction. Like most years, the big news is often the most tragic, such as natural disasters or an iconic business gone awry, but at least we had a social media juggernaut of an astronaut to lighten the mood.

Like any prime minister, Stephen Harper has faced his share of controversies during his time leading the federal government, but none have had the impact of the current Senate expense scandal. At first, it was just a matter of a few senators claiming housing and travel expenses to which they were not entitled. At that point, the biggest problem was the fact that they were all Harper appointees—and high profile ones at that, especially Mike Duffy, a major Conservative fundraiser.

But then Harper’s highly respected right-hand man, former Chief-of-Staff Nigel Wright, stepped in to pay back Duffy’s $90,000 expense tab in what has begun to look like an effort by the Prime Minister’s Office to sweep the issue under the rug. There was also an apparent effort by the PMO to direct Conservative senators on how to deal with the issue, a breach of the supposed independence of the Senate. Then the senators involved were suspended without pay in a move some say breached their right to due process.

With a police investigation into various aspects of the scandal and a growing list of PMO staff revealed to have been involved, the issue is far from settled.

Toronto Mayor Rob Ford wasn’t new to controversy before the crack-smoking scandal broke, but few could have imagined the deluge of late-night jokes and comedy routines he has since inspired. Ford has been fodder for Canadian newspapers since his run for mayor of Canada’s largest city in 2010, with controversial remarks, a drunk-driving arrest in 1999 that came to light during his campaign, and serial gaffes like walking into a news camera and falling down while trying to throw a frisbee.

But those were the good days for Ford, before his association with known criminals emerged and a video of him allegedly smoking crack became part of a crime plot complete with blackmail, deceit, and murder. Not that any of that has had a huge affect on his popularity—Ford’s supporters are still behind him. However, his opponents have ample fuel for continued attacks.

Canada’s trade and investment relationship with China’s communist regime became a major issue in 2013. In February, state-owned China National Offshore Oil Corporation (CNOOC) bought out Calgary-based oil and gas company Nexen for $15 billion. The move sparked concerns about the influence the Chinese regime could gain in Canada with significant holdings in Alberta’s oil and gas sector, and how Chinese state-owned enterprises would conduct themselves. In response, the government introduced new measures limiting the involvement of state-owned enterprises.

Another controversial issue was the Canada-China Foreign Investment Promotion and Protection Agreement (FIPA). While the deal was signed in 2012, it wasn’t introduced to Parliament for final approval until this year. The NDP didn’t raise the issue during the 21 days it sat in the Parliament, but did table a motion after that sitting period expired and called on the government to reject the deal. The FIPA faced a legal challenge by the Hupacasath First Nation, which said it should have been consulted because the deal could impact their treaty rights. To date, the agreement has yet to get final ratification from cabinet, raising questions about what has played out behind the scenes.

Natural resources have been Canada’s economic backbone since Europeans first arrived, but rarely has anyone taken offence to that the way environmentalists have in the face of the proposed Keystone XL pipeline to Texas and the proposed Northern Gateway pipeline to the coastal city of Kitimat, British Columbia.

With huge oil reserves in the U.S. being developed that could compete with Canada’s oil sands crude, the Conservative government has put significant diplomatic pressure on the Obama administration to approve Keystone XL, and has made major changes to environmental legislation to ease barriers to pipeline development. It’s an effort that has met with an uproar from environmentalists opposed to oil sands development due to the risk of spills and additional emissions from the natural gas used to steam the sands to release the bitumen crude.

The issue is far from resolved and promises to garner headlines for years to come.

Canada was stunned when images of a giant cloud of fire in Lac-Mégantic revealed the devastation wreaked on the small town in Quebec in July. The 74-car train carrying crude oil derailed as its drivers slept, killing over 40 people and destroying half the town. The disaster has drawn attention to the rapid rise in the amount of oil being shipped on Canada’s railways, as well as other derailments and outdated regulations. Politicians have begun looking into the disaster itself along with rail regulations, but the legislative side of the issue is still being scrutinized. Meanwhile, the company responsible, Montreal, Maine and Atlantic Railway, has moved into bankruptcy protection and is facing lawsuits related to the disaster.

Canada has moved into the endgame with the European Union on a far-reaching trade deal that broke new ground on what could be covered under an international free trade agreement. The Canada-EU Comprehensive Economic and Trade Agreement (CETA) has been a key trade deal for the Conservatives and dwarfs a series of much smaller deals the government has made with countries like Panama and Jordan since coming to power.

The agreement has been controversial, however, with opponents claiming that provisions for investor state arbitration will undermine Canadian sovereignty by giving EU companies the right to sue Canada for lost profits. Supporters say CETA gives Canada access to the massive EU economy and will help lessen our economic dependence on trade with the U.S. But while the government has outlined the various provisions of the deal and it is now being studied in Parliament, the actual text has yet to be released, raising questions about what remains unknown.

Quebec’s Parti Quebecois government under Pauline Marois ignited a firestorm of controversy when it introduced legislation to ban religious symbols in the workplace. The effort has been described by critics as a repressive affront to Canadian multiculturalism while supporters say it extends the province’s secular character and puts needed limits on the government’s obligations to accommodate religious groups.

For Marois, the charter is a risky effort to create a wedge issue that will cement support among Quebecois concerned the French character of the province is under assault by religious minorities. It also forces her political opponents to defend multiculturalism and religious expression in a province with a history of low support for both. While some say the charter won’t stand up to a court challenge, that may not matter for Marois’ political fortunes. On the other hand, research polls show most Quebecers are more concerned with issues like jobs and corruption than religious accommodation. Unfortunately, those problems are harder to solve.

Canada and the world tuned in as our very own astronaut Chris Hadfield showered us with tweets and YouTube videos from his perch in outer space. Hadfield commanded the International Space Station from March until May, the first Canadian to ever hold the post. But it was the Sarnia native’s social media savvy, with the help of his son and PR folks at the Canadian Space Agency, that made his turn at command international news. Hadfield’s instructional experiments, tweets, and stunning photographs from the outer limits made him a sensation. He topped it all off with an earnest and credible cover of David Bowie’s “Space Oddity” that garnered national pride and 20 million views.

Canada mourned another teen suicide that resulted from sexual harassment and bullying when Rehtaeh Parsons took her own life in April. Parson’s death was shocking to many, both for the circumstances surrounding it and its similarity to the death of Amanda Todd the year before. Both girls suffered sexual harassment and online bullying. Parsons said she was raped by four boys in 2011, a crime for which the police were unable to lay charges due to lack of evidence. A photograph of the rape circulated and fuelled online harassment similar to that suffered by Todd. The deaths inspired the government to introduce a bill to crack down on cyberbullying. Unfortunately, Bill C-13 has proven controversial for containing many other provisions that have raised questions about its true intent. Two teenagers are facing child pornography charges over pictures of Parsons’ attack.

This year, the Charbonneau Commission continued to rock La Belle Province and make national headlines as two mayors were arrested in connection to the corruption probe. The commission has been making the news since it began in 2011, but 2013 was a particularly noteworthy year as evidence mounted and arrests were made.

On May 9, former Laval mayor Gilles Vaillancourt was arrested and charged with gangsterism. A month later, Montreal interim-mayor Michael Applebaum—who came into office in part on a platform that he was not connected to the current corruption scandal that had unseated his predecessor Gerald Tremblay—was arrested on 14 charges stemming from land deals he made prior to his role as mayor. Applebaum was the first anglophone mayor Montreal had had in over 100 years.

Canada’s own smartphone maker slid further toward the abyss this year as a much-needed new line of devices failed to gain traction. Once the world’s dominant smartphone, Blackberry’s decline has been making news in Canada since the iPhone’s rise was followed by Android and better devices from several makers. This year, Research in Motion changed its name to Blackberry and introduced new devices and a new operating system with a marketing push aimed at restoring the lagging brand.

It didn’t work. Sales remained low, competitors gained traction, and the stock price continued to fall. The company replaced its CEO and tried to find somebody to buy it out so it could go private. A deal with Fairfax Financial fell through and Blackberry refused several offers to buy parts of its business on the grounds that a breakup would not serve all stakeholders, namely employees, customers, shareholders, and others. But despite the buyout falling through, Blackberry got an influx of cash it will use in an attempt to re-launch its fortunes.

In June, Canada’s wealthiest major city was recast as a dirty version of Venice when major flooding turned Calgary streets into canoe-only passageways. Heavy rain caused devastation in several communities throughout Alberta and claimed the lives of four people. In Calgary, over 100,000 people were displaced and as cleanup efforts got underway, news stories abounded detailing the supportive efforts of volunteers, and communities banding together in the face of the disaster. Insured damages reached $5 billion according to some estimates, and additional costs from the floods threw out the federal budget by adding an unexpected $1.6 billion to the deficit for the year.