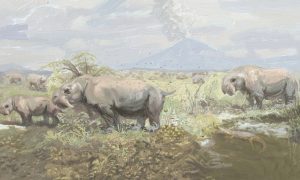 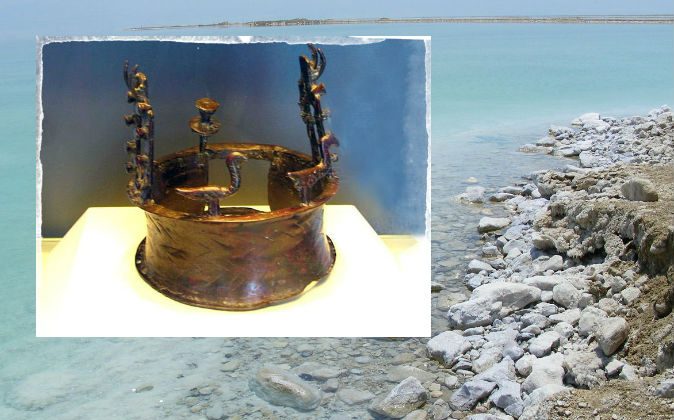 The oldest known crown in the world, which was famously discovered in 1961 as part of the Nahal Mishmar Hoard, along with numerous other treasured artifacts, dates back to the Copper Age between 4000–3500 B.C.

It was revealed in New York University’s Institute for the Study of the Ancient World as part of the “Masters of Fire: Copper Age Art from Israel” exhibit earlier this year.

The ancient crown is just one out of more than 400 artifacts that were recovered in a cave in the Judean Desert near the Dead Sea more than half a century ago.  The crown is shaped like a thick ring and features vultures and doors protruding from the top. It is believed that it played a part in burial ceremonies for people of importance at the time.

New York University wrote: “An object of enormous power and prestige, the blackened, raggedly cast copper crown from the Nahal Mishmar Hoard greets the visitor to Masters of Fire. The enigmatic protuberances along its rim of vultures and building façades with squarish apertures, and its cylindrical shape, suggest links to the burial practices of the time.”

The Nahal Mishmar Hoard was found by archaeologist Pessah Bar-Adon hidden in a natural crevice and wrapped in a straw mat in a cave on the northern side of Nahal Mishmar, which became known as the “Cave of Treasures.” The 442 prized artifacts made from copper, bronze, ivory, and stone, include 240 mace heads, 100 scepters, 5 crowns, powder horns, tools, and weapons.

Carbon-14 dating of the reed mat in which the objects were wrapped suggests that it dates to at least 3500 B.C. It was in this period that the use of copper became widespread throughout the Levant, attesting to considerable technological developments that parallel major social advances in the region.

Some of these objects are like nothing ever seen anywhere else. The round knobs are usually said to be mace heads, but there is no evidence that any of them were ever used in combat. The remaining objects are even more unusual and unique in style, such as the bronze scepter depicted below.

The objects in the Nahal Mishmar Hoard appear to have been hurriedly collected, leading to the suggestions that the artifacts were the sacred treasures belonging to the abandoned Chalcolithic Temple of Ein Gedi, some 7.5 miles (12 kilometers away), which may have been hidden in the cave during a time of emergency.

Daniel Master, professor of archaeology at Wheaton College and a member of the curatorial team, said: “The fascinating thing about this period is that a burst of innovation defined the technologies of the ancient world for thousands of years.”

Jennifer Chi, ISAW Exhibitions Director and Chief Curator, added: “To the modern eye, it’s stunning to see how these groups of people, already mastering so many new social systems and technologies, still had the ability to create objects of enduring artistic interest.”

The purpose and origin of the hoard remains a mystery.

This article was republished with permission from the author. Read the original at Ancient Origins.