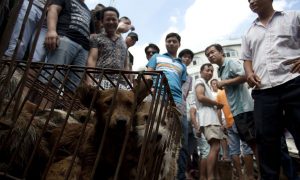 A Texas marathon runner was attacked by a pit bull mix while training, according to a report.

“The dog came running right at me and jumped up right on me and pulled me down to the ground,” she said. “I was just terrified. I really thought it was going to try to kill me.”

A Fort Worth woman is recovering after she was attacked and mauled by a pit bull while jogging along the city’s popular Trinity Trails.

“Before I knew it, the dog had jumped up on me, grabbed my arm, pulled me to the ground,” elaborated Keen to CBS Dallas. “I got up and tried to sprint away. It’s a lot faster than I was, unfortunately. (It) grabbed me by the back, pulled me back down. I got up and we had a little bit of a face off. I kicked it with what I could.”

If not for two bystanders, she could have died, she told the news outlet. A woman threw rocks at the dog.

“I could not have gotten away on my own,” Keen told the NBC affiliate. “This dog was stronger than me and was faster than I was.”

Tyler Caviness, who was walking his dogs, found Keen on the trail, bleeding and desperate.

“I knew she was scared for her life and you know at that point I just kind of, you know, there was nobody else in the vicinity,” he said.

Caviness said the pit bull calmed down before he grabbed it by the collar and sat on it.

“I mean I’m lucky I’m alive,” Keen said of her rescuers. “I’m lucky I had two people walk up at that same time because I don’t know what would have happened.”

A city official said the owner was cited for the attack and noted that the pit bull may ultimately be put down.

Keen said she will continue to run along the trail.

SMU grad training for Olympic trials attacked by dog while running in Fort Worth https://t.co/SnLeddLCig

“This isn’t going to stop me from doing what I want to do,” she said.

What’s more, she added, dog owners need to keep their animals on a leash.

“Owners need to be held accountable of their dog is off the leash,” said Keen in the CBS report. “Even if you do classify your dog as a dangerous dog, you never know what it’s going to do.”