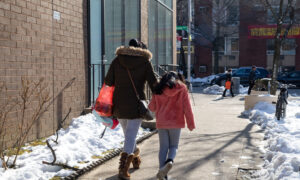 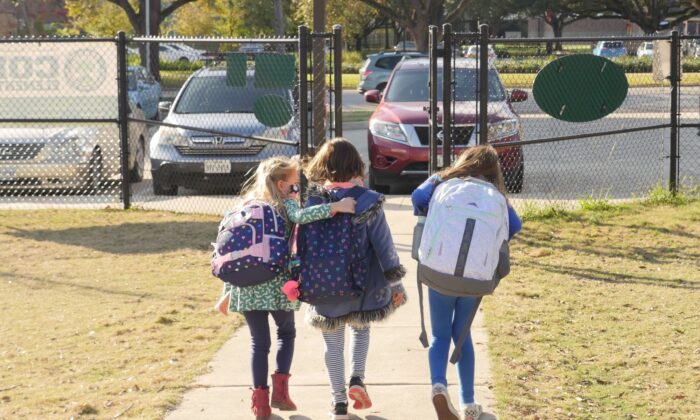 School children walk outside an elementary school in Bellaire, outside Houston, Texas, on Dec. 16, 2020. (François Picard/AFP via Getty Images)
Texas

A Texas bill that aims to purge elements of critical race theory from public schools is advancing through the state legislature, in the wake of a growing trend of Republican states pushing back against the race-centered ideology.

Introduced on Monday by Republican state Rep. James White, the House Bill 4093 does not explicitly call out the critical race or gender theory, but specifically prohibits their key concepts from being taught by schools and teachers.

If passed, the legislation would make it illegal to teach students that a person should be treated favorably or discriminated against because of his or her race or sex, that a person bears responsibility for the past actions of others of the same race or sex, or that a person of a certain race or sex is inherently racist, sexist, or oppressive.

The proposed legislation also prohibits state agencies, school districts, teachers, and administrators from taking any private funds for curriculum development, purchasing materials, or staff training. This measure would prevent Texas education officials from adopting materials such as the “Equitable Math” training courses promoted by the Bill & Melinda Gates Foundation, which tells math teachers that it is racist to require students to show their work or focus on finding “the right answer.”

When it comes to teaching about current events, the bill specifies that teachers should not be pressured to discuss “controversial issues of public policy or social affairs.” If teachers want to discuss those issues inside the classroom, they have to try their best to present the subjects from “diverse and contending perspectives” without showing favor to any of them. Students would also not be allowed to receive credit for participating any activity involving social or public policy advocacy.

In addition, the bill seeks to amend the state law to make sure that the mandatory civics education include ideals and writings that are essential to the founding of the United States. Civics and social studies teachers would be require to teach “the fundamental moral, political, and intellectual foundations of the American experiment in self-government,” and documents such as the Declaration of Independence, the Constitution, specific Federalist Papers, the first Lincoln-Douglas debate, and French historian Alexis de Tocqueville’s “Democracy in America.”

The Texas bill comes amid a nationwide debate over critical race theory and its increasing presence in America’s social, cultural, and economic institutions. An outgrowth of the European Marxist school of critical theory, critical race theory sees society through a lens of power struggle between the race of the oppressor and that of the oppressed. As a result, according to the theory, the very foundations of the American system—such as rationalism, constitutional law, and legal reasoning—are considered to be tools of racial oppression.