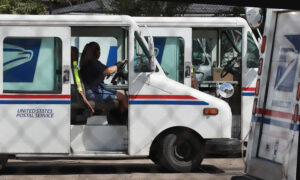 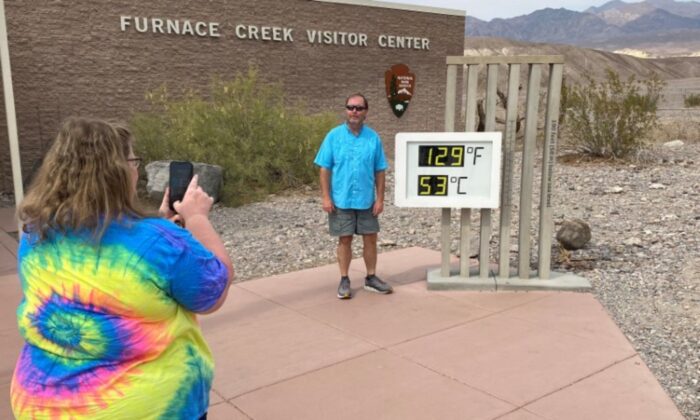 Patrick Fox, 63, from Utah poses for a picture next to the thermometer at the Furnace Creek Visitor Center at Death Valley National Park, with the temperature showing at 129 degrees Fahrenheit (53.8 degrees C) in Death Valley, Calif., on June 16, 2021. (Norma Galeana/Reuters)
Local News

Texas and California urged consumers to conserve energy this week to reduce stress on the grid and avoid outages as homes and businesses crank up air conditioners to escape a scorching heatwave blanketing the U.S. Southwest.

High temperatures were expected to top 110 degrees Fahrenheit (43 Celsius) through the weekend in parts of several states including California, Arizona, and Nevada.

“The public’s help is essential when extreme weather or other factors beyond our control put undue stress on the electric grid,” said Elliot Mainzer, chief executive of the California ISO, which operates the grid in most of California.

Over the past year, Texas and California imposed rotating or controlled outages to prevent more widespread collapses of their power systems—California during a heatwave in August 2020 and Texas during a brutal freeze in February 2021.

ERCOT has been under fire for the design of its system, which is not connected to other U.S. grids to avoid federal oversight, and because they do not operate a “capacity” market that keeps power generation on stand-by during extreme weather events.

The California ISO said its Flex Alert, or call for conservation, “is critical because when temperatures hit triple digits across a wide geographic area, no state has enough energy to meet all the heightened demand.”

The ISO said evening is the most difficult time of day because demand remains high but solar energy diminishes. So far this year, solar has provided 22 percent of the grid’s power.

Real-time prices in ERCOT have remained below $100 per megawatt hour since Tuesday evening as more power plants returned to service from forced outages that caused prices to soar over $1,900 for two 15-minute periods on Monday.