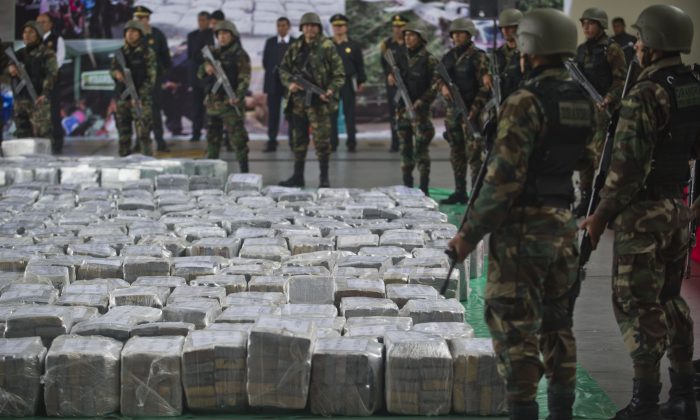 Police officers during the arrival of more than 7 tons of cocaine at the police airport in Lima on Sept. 1, 2014. (Ernesto Benavides/AFP/Getty Images)
Americas

Terrorist organizations like ISIS are looking for roads into the United States, and whether they get them is merely a question of how much money it will take to convince the drug cartels it’s worth the risk, according to regional experts.

“I think with ISIS’s checkbook, it’s just a matter of time,” said Scott Mann, a retired lieutenant  colonel in the Green Berets, in a phone interview.

“They want to utilize this existing network of narcoterrorism that can move any commodity—dope, people, or a dirty bomb.” Mann said. These guys are looking to leverage this massive network that would allow them to move assets through.”

The drug trade involves more than just powerful cartels looking to make a profit. Throughout the region, there are also narcoterrorist organizations fueled by political ideology, and groups like Hamas and Hezbollah that use illicit trade to fund their activities abroad.

Mann has witnessed these problems firsthand. During his 15 years in the U.S. Special Forces, he was deployed in countries including Colombia, Ecuador, Peru, and Panama where he helped train government forces friendly with the United States on how to “defend against lawlessness.”

“I did a lot of work with the governments to fight insurgent groups like the FARC,” he said, referring to the Marxist narcotterror group, the Revolutionary Armed Forces of Colombia (FARC).

While terrorist groups would like to build ties with the drug traffickers, “as far as I know there is no connection whatsoever at this point between narcoterrorists and ISIS,” according to Dr. José de Arimatéia da Cruz, adjunct research professor at the U. S. Army War College.

“At least not at this point,” Cruz said in a phone interview. “Things may change in the future.”

They want to utilize this existing network of narcoterrorism that can move any commodity—dope, people, or a dirty bomb.
— Scott Mann, retired lieutenant colonel, Green Berets

The cartels are hesitant to get involved with terrorist groups—mainly because they see it as too risky. Cruz said, “At this point, if they start associating with international terrorism, there will be more U.S. involvement and that will affect their business.”

Yet, according to Mann, “Money talks, trust me, in these areas; and even though these guys have some sense of moral compass … they would move stuff for [ISIS] if the money was right.”

“I saw firsthand how those two worlds come together,” Mann said, noting his work fighting narcoterrorism. “This nexus between terror and organized crime is growing.”

A Difference of Ideology

While narcoterror groups are a problem in Latin America, they differ from terrorist groups like ISIS or al-Qaeda.

According to Mann, narcoterror groups like FARC are both financially and politically motivated, and use the drug trade to fund their cause. They’re more of a local threat, he said, but view the United States as a threat to their operations.

“They want this environment of persistent chaos so they can operate their multibillion-dollar enterprise, and not be inhibited by the United States,” he said.

According to Cruz, “It’s a matter of interpretation.”

“Any group that may be against the sovereign state or the government could be labeled a terrorist organization,” he said. “Some of them have nothing to do with terrorism, and their activities are limited to Latin America.”

On the other hand, ISIS has been recruiting fighters from the Caribbean island nation of Trinidad and Tobago—a country that Cruz described as “ground zero” for terrorist recruiters.

Cruz noted there have been between 80 and 100 Trinidadians who have traveled to join ISIS, and people in the region are worried if they return they may continue engaging in terrorism and possibly target the United States.

According to Mann, while narcoterror groups are more financially influenced, “It is their work to move these commodities in and out of these licit and illicit pipelines that makes them useful to Islamist extremists.”

The political environment in Latin America has fed the problem. It started in the 1990s with the Pink Tide, Cruz said, when “you had left-leaning politicians coming to power.”

The governments that took power began cutting ties with the United States, Cruz said, and “most of those countries shifted alliances to Russia, China, or Iran.”

China coaxed many otherwise isolated nations in Latin America with a sort of “anything goes” policy, and practices that would have otherwise pushed these countries out of the global market, have been largely ignored by China.

The result is that many corrupt or authoritarian regimes in Latin America that would have otherwise likely collapsed, have instead been sustained by Chinese cash.

According to a Nov. 5, 2015 report from the U.S.-China Economic Security Review Commission, the Chinese regime has “signaled to Latin American governments that economic development can be achieved without adhering to Western proscriptions,” and without having to share “U.S. objectives for regional stability and good governance.”

In practice, this has taken several forms. “Argentina has refused to negotiate with Western creditors in part due to alternative loans from China,” the report states, and otherwise isolated governments in the region have been able to “sustain their anti-Western orientation,” including those of Bolivia, Ecuador, and Venezuela.

This corrupt environment has created a kind of breeding ground for terrorism.

Mann said terror groups “are looking for fragile states where a large chunk of the population is out of reach or marginalized from the government.”

He noted that while it’s unlikely ISIS has already made inroads with drug cartels or narcoterrorists, the trends are heading in that direction.

“When you see trends start to line up,” he said, “you need to take action to get ahead of those trends instead of having a commission afterward to find out what went wrong.”