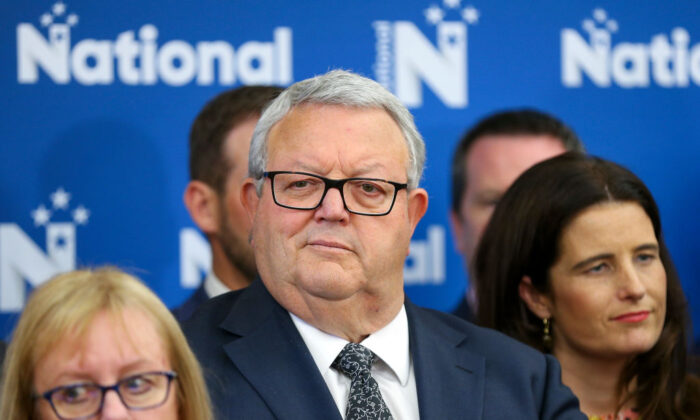 Gerry Brownlee of the National Party looks on during a press conference at Parliament in Wellington, New Zealand, on Oct. 20, 2020. (Hagen Hopkins/Getty Images)
Asia & Pacific

In response to the new United Nations (U.N.) report that found credible evidence of serious human rights violations in Xinjiang, the New Zealand National Party’s foreign affairs spokesman Gerry Brownlee has instead echoed Chinese Communist Party (CCP) propaganda that it was dealing with a “terrorism problem.”

“It’s good that it acknowledges that there has been a terrorism problem, in particular, the part of China that the focus of this report is on,” he told Radio New Zealand on Thursday.

Brownlee believes New Zealand should continue to make statements condemning human rights issues in the province where opportunities arise while also recognising that it was a “third-world country dealing with a problem internally.”

He said that New Zealand also should not look into stopping imports from Xinjiang, claiming it was a “great tool” for discussions around a more “compatible view of human business.”

He added that he hoped China would “engage appropriately” and look at some of the recommendations made by the report.

The U.N. report accused the CCP of using an “anti-terrorism law system” that used vague national security and counter-terrorism laws to discriminate against Uyghurs and other minorities, leading to “serious human rights violations.”

“The extent of arbitrary and discriminatory detention of members of Uyghur and other predominantly Muslim groups, pursuant to law and policy, in context of restrictions and deprivation more generally of fundamental rights enjoyed individually and collectively, may constitute international crimes, in particular crimes against humanity,” the report states.

It recommended that the CCP undertake a full review of the legal framework governing national security, counter-terrorism, and minority rights in Xinjiang to “ensure their compliance with binding international human rights law” and repeal all discriminatory laws and practices against Uyghurs and other minorities.

Brownlee told Newsroom that if the CCP took up the report’s recommendations and engaged with the U.N. to address the concerns, it would “further assert the leadership role that China is starting to assume within the world.”

Despite criticisms, the National Party has remained silent on Brownlee’s comments.

It is not the first time Brownlee, who was the minister of foreign affairs in 2017, has followed the CCP party line.

On Aug. 8, he told Newsroom that the Chinese regime had done a “pretty amazing job” of “lifting tens of millions of people out of abject poverty.”