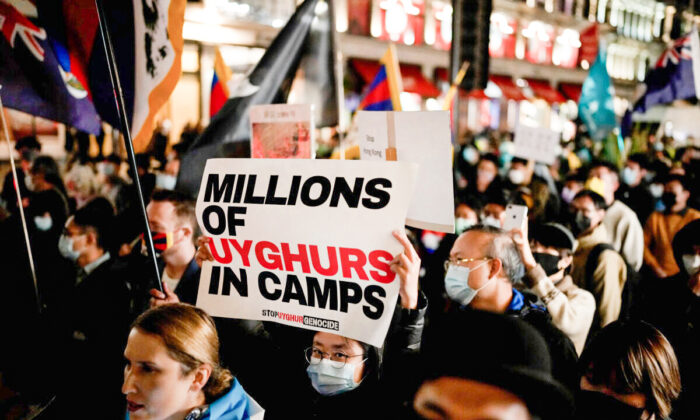 Demonstrators supporting Tibetans, Uyghurs, and Hong Kongers take part in a protest against the Chinese Communist Party as they march along Regent Street towards the Chinese Embassy in London, on Oct. 1, 2021. (Matt Dunham, File/AP Photo)
China Human Rights

China’s Treatment of Uyghurs in Xinjiang May Amount to Crimes Against Humanity: UN

A number of “serious human rights violations” may have been committed against Uyghurs and other Muslim minorities in China’s western Xinjiang region, according to a new report by the United Nations’ Office of the High Commissioner on Human Rights (OHCHR).

The 48-page report (pdf) was published on Aug. 31 by U.N. Human Rights Commissioner Michelle Bachelet, just hours before the expiration of her term. Bachelet has been criticized for her “soft” stance on China and for downplaying the Chinese Communist Party’s (CCP’s) human rights abuses.

China had opposed the publication of the report, the result of an investigation that found evidence that the mostly Muslim ethnic minority groups were subjected to mass internment, forced labor, sexual abuse, family separations, and torture. The report also accused China of using vague national-security laws to clamp down on minority rights and establish “systems of arbitrary detention.”

Allegations about serious human rights violations by Beijing against Uyghurs and the other groups were first brought to the U.N.’s attention in 2017. Those allegations were mainly within the context of the Chinese regime’s “application of counter-terrorism and counter-‘extremism’ strategies,” according to the report.

Investigators at the U.N. combed through documentary material relating to the allegations, with particular attention focused on the Chinese regime’s own laws, policies, data, and statements. OHCHR also “requested information and engaged in dialogue and technical exchanges with China throughout the process,” according to the report.

They uncovered “credible evidence” of torture possibly amounting to “crimes against humanity” at so-called Vocational Education and Training Centers (VETC) in China between 2017 and 2019. Beijing has defended the centers, stating that people in those facilities learn language and job skills.

According to the U.N. report, “two-thirds of the twenty-six former detainees interviewed” by U.N. investigators “reported having been subjected to treatment that would amount to torture and/or other forms of ill-treatment,” either at the VETCs or “in the context of processes of referral to VETC facilities.”

‘Torture or Ill-Treatment’ at ‘Training Centers’

Such incidents recorded by individuals detained in VETCs included “torture or ill-treatment, including forced medical treatment and adverse conditions of detention,” as well as “allegations of individual incidents of sexual and gender-based violence,” the report states.

The report also accused China of using an “anti-terrorism law system” that includes vague national security and counter-terrorism laws that discriminate against Uyghur and other predominantly Muslim minorities which had then led to “serious human rights violations.”

“The extent of arbitrary and discriminatory detention of members of Uyghur and other predominantly Muslim groups, pursuant to law and policy, in context of restrictions and deprivation more generally of fundamental rights enjoyed individually and collectively, may constitute international crimes, in particular crimes against humanity,” the report states.

The U.N. recommended that the Chinese regime takes immediate steps to release “all individuals arbitrarily deprived of their liberty,” and inform the families of those missing in Xinjiang as to their whereabouts so that they can establish “safe channels of communication and travel enabling families to reunite.”

It also suggested that the CCP “undertakes a full review of the legal framework governing national security, counter-terrorism, and minority rights” in Xinjiang to “ensure their compliance with binding international human rights law, and urgently repeal all discriminatory laws, policies, and practices against Uyghur and other predominantly Muslim minorities.”

Report Is a ‘Game-Changer’

The Aug. 31 report, which had been in the works for three years, was immediately dismissed as a smear campaign by the Chinese regime, which denied all allegations of abuse and asserted that the camps are being used to fight terrorism.

“This so-called ‘assessment’ is a politicized document that ignores the facts, and fully exposes the intention of the US, Western countries, and anti-China forces to use human rights as a political tool,” China said in a lengthy statement, while adding that “all ethnic groups, including the Uyghur, are equal members of the Chinese nation.”

The World Uyghur Congress, an umbrella group that represents about 60 organizations, welcomed the report while calling for an “immediate response to put an end to atrocities against Uyghurs.”

“This is a game-changer for the international response to the Uyghur crisis,” Uyghur Human Rights Project Executive Director Omer Kanat said in a statement. “Despite the Chinese government’s strenuous denials, the UN has now officially recognized that horrific crimes are occurring.”

Sophie Richardson, China director at Human Rights Watch, told The Associated Press that the report’s findings showed “why the Chinese government fought tooth and nail to prevent the publication” of the report.

“The United Nations Human Rights Council should use the report to initiate a comprehensive investigation into the Chinese government’s crimes against humanity targeting the Uyghurs and others—and hold those responsible to account,” she said.

There are about 10 million Uyghur Muslims in the western region of Xinjiang and human rights groups estimate that more than a million people have been detained at camps in the region. The United States has accused the CCP of genocide.