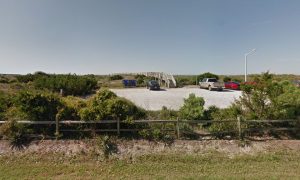 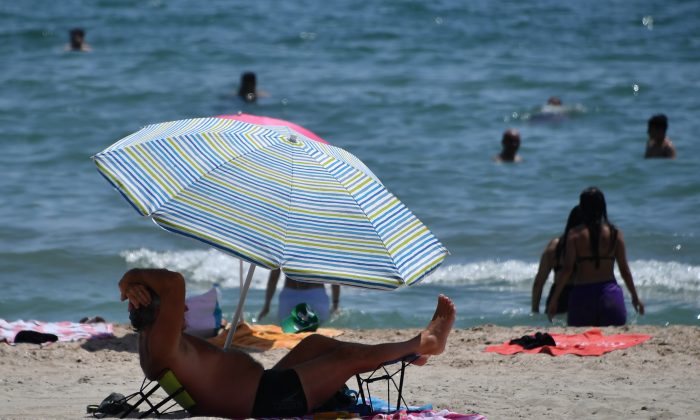 A beach umbrella in a file photo. (Pascal Guyot/AFP/Getty Images)
US News

Teenager Impaled by Flying Umbrella at Beach, Rushed to Hospital

An umbrella that was loose popped out of the sand and flew through the air at a beach in Massachusetts, impaling a 13-year-old boy.

The accident took place at Good Harbor Beach in Gloucester on Aug. 9.

“I was sitting right here, and a little gust of wind came up, and the umbrella popped straight up in the air,” Chris Carson told WCVB.

“Before anybody could grab it, it just kind of rolled over, and the kid was standing in the way on the beach. He couldn’t get out of the way.”

First responders say they are treating a person who was impaled by a flying umbrella at Good Harbor Beach in Gloucester. #WCVB pic.twitter.com/stkyMXkKYz

The end of the umbrella was stuck into the boy’s shoulder, Carson said, causing him to bleed and prompting those around him to apply a tourniquet.

“Went up in the air and hit a couple of ladies in the head and came down and impaled a poor boy right in the armpit and there was blood everywhere,” witness Laura Wood told Boston 25.

Some people started screaming when the umbrella impaled the boy, who was visiting from Florida.

“All I heard was a woman scream and then the umbrella went flying and then he was on the ground lying down,” said Brandon Phillips, another witness. “And then his mom was like, ‘Get the lifeguard, get the lifeguard,’ so everyone was freaking out.”

“When I saw that I started to run down and when I got down there, there was like a hole in the kid’s arm so I started to talk to him, another lady started tying a tourniquet while others were calling the paramedics,” Jacob Vargus, who saw the umbrella go flying, told WHDH.

“These things, unfortunately, happen all of the time, people don’t dig them down firmly and they can impale you, they can hurt you so, hopefully, it’s a lesson for people at the beach to seriously dig their umbrella poles in the ground so they don’t come out and hurt anybody,” added Mike Marnoto, who also witnessed what happened.

The Gloucester Fire Department said in a statement that first responders arrived at approximately 1:40 p.m. and found the boy had serious but not life-threatening injuries.

Gloucester emergency medical technicians carried the boy off the beach and he was taken to Beverly Hospital.

Captain Nick Ouellette of the fire department told Boston 25 that it was “a freak accident.”

Witnesses on #GoodHarborBeach in #Gloucester say a boy was impaled by an umbrella, puncturing his left shoulder. People began running to his aide … tying a tourniquet and calming him down until emergency crews arrived. #7news pic.twitter.com/ZJxgZv1wWw

“When we heard it come over the radio we kind of did a double-take because we confirmed he was in fact reportedly impaled by a beach umbrella,” Ouellette told WHDH. “It’s a pretty rare event around here even with the number of beaches we have, and the amount of people we have visit our beaches every year, it’s not a common occurrence.”

Experts said that cheaper umbrella shouldn’t be used, especially if it’s windy outside.

“Make sure that you’re not using an umbrella made of cheaper material, like a flimsy plastic umbrella,” Jessica Waters, the communications manager of Ocean City, Maryland, told ABC last year.

People should bury the umbrella at least 16 inches down, using a shovel or rocking it back and forth for a while.

If it is windy, people can tilt the umbrella into the wind.