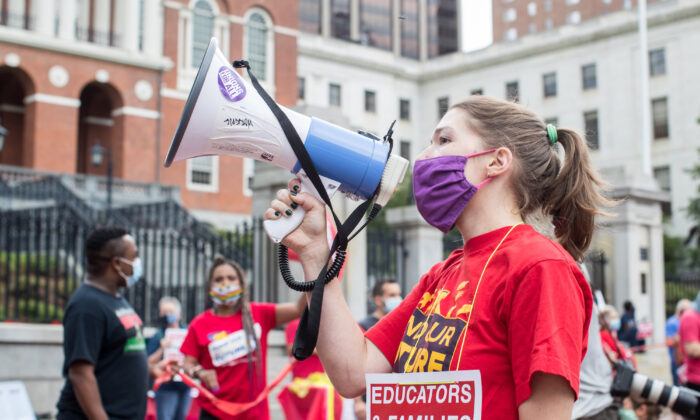 People who are part of standout protest organized by the American Federation of Teachers chant, hold signs, and raise their fists outside of the Massachusetts State House in Boston, Mass., on Aug. 19, 2020. (Scott Eisen/Getty Images)
Politics

The American Federation of Teachers (AFT), one of the largest teacher labor unions in the country, is being accused of using its funds for political activities while not paying taxes on such spending.

Michael O’Neill, Assistant General Counsel at Landmark legal foundation, asked the IRS to audit the AFT over the alleged misrepresentation of funds. In an interview with NTD, O’Neill pointed out that AFT leadership and personnel mobilize in electioneering activities every election season. They host rallies, bus tours, and use their membership to advocate for candidates like Joe Biden, Kamala Harris, and Hillary Clinton, which is something unions are allowed to do.

However, “if unions use general treasury funds—in other words, funds derived from collection of teachers’ dues—to finance those sorts of activities, that is subject to reporting on the union’s tax return,” O’Neill stated.

He pointed to the National Education Association and the Service Employees International Union (SEIU)—both of which engage in such political activity while acknowledging it in their tax returns.

The AFT claims that it doesn’t engage in such political activity in its tax filing yet “clearly” does so, O’Neill said.

When AFT President Randi Weingarten went door-to-door campaigning in support of Hillary Clinton during the 2016 election, the funds for the activity came from the organization’s general treasury, he said.

The AFT’s disclosure reports do not provide information on the money spent on rallies and bus tours conducted on behalf of the candidates they support. Only the IRS can answer such questions, O’Neill stated while adding that spending on such political activity is to be taxed at the corporate income tax rate.

The Epoch Times reached out to AFT for comment.

The AFT is also facing backlash for the role it played in shutting down schools during the COVID-19 pandemic. A Sept. 1 article in The Wall Street Journal specifically pointed fingers at AFT chief Weingarten for keeping schools closed as long as possible before parents pushed back. “You flunked the pandemic, Randi, and set back America’s children for years,” the WSJ’s editorial board said.

It detailed the results of the 2022 National Assessment of Educational Progress (NAEP) scores, which showed that average nine-year-old scores across America fell the most on record in math and in reading. “Two decades of progress have been erased in two years,” it stated.

In a letter responding to the WSJ, Weingarten blamed President Donald Trump and his education secretary, Betsy DeVos, for school closures while praising Biden and his administration for reopening schools.

However, Trump was at the forefront of the counter-movement to keep schools open during the pandemic. In the October 2020 presidential debate, Trump strongly argued for keeping schools open.

Democrats, meanwhile, were criticizing Trump for his stance. In a July 28 video uploaded on the Democratic National Committee’s official YouTube channel, Trump was described as being “desperate to reopen schools because he thinks it will save his reelection.”