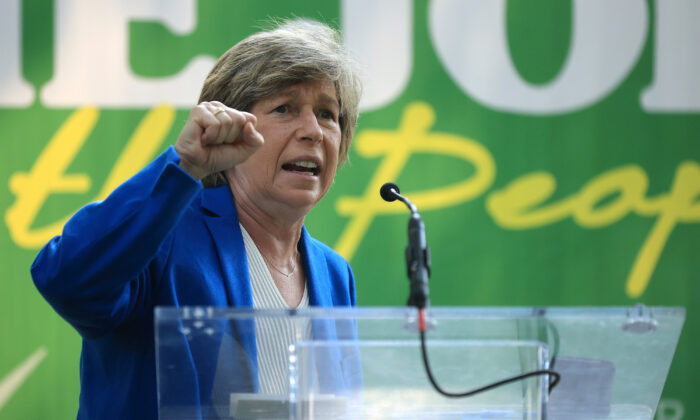 Amid reports of severe learning loss suffered by American children during school closures, American Federation of Teachers (AFT) president Randi Weingarten is trying to deflect the blame for the widespread school closures onto the Trump administration.

“While former President Donald Trump and his education secretary, Ms. [Betsy] DeVos, ranted and raved, their successors put the safety measures in place to get reopening done,” Weingarten claimed in a letter published Sunday in The Wall Street Journal.

The letter is a response to the newspaper’s earlier editorial, which called out the AFT for driving the nationwide shutdown of schools during the COVID-19 pandemic, as well as its recent effort to rewrite history and rebrand itself as a champion of school reopening.

‘You Flunked the Pandemic, Randi’:  WSJ

The AFT has left a trail of attempts to make it harder for schools to reopen for in-person instruction. A publicized email exchange between the AFT and the CDC shows that the union successfully lobbied the health agency to modify its school reopening guidelines, allowing teachers and staff living with a “high-risk” person to work remotely, and demanding that schools in communities with high COVID-19 case levels stay closed pending updated guidelines. When the CDC revised its school-distancing guidelines from 6 feet to 3, Weingarten opposed the change, declaring that the union was “not convinced that the evidence supports changing physical distancing requirements at this time.”

“After the first months of COVID uncertainty, the school shutdowns had nothing to do with safety,” the WSJ editorial board argued, pointing to a collapse in American 8-year-olds’ math and reading scores. “You flunked the pandemic, Randi, and set back America’s children for years.”

Instead of directly addressing the role the AFT played in prolonged school closures—which directly translated to learning loss, Weingarten equated the criticism of her organization with an attack on all teachers who worked to meet their students’ needs during a hard time.

“Teachers deserve our ear and our help, not shame and blame,” the union leader said. She also praised the Biden administration’s American Rescue Plan (ARP) as “our vehicle to accelerate learning so kids can recover and thrive.”

It remains debatable how much the ARP actually helped schools reopen, since President Joe Biden signed the relief package on March 11, 2021, at which point many private schools and some public schools had already reopened, or had never closed to begin with. Much of the $122 billion allocated via the ARP to safely reopen PreK–12 schools still hasn’t been spent.

Schools Re-opened ‘In Spite Of’ Republicans

The White House has adopted a similar rhetoric. When White House press secretary Karine Jean-Pierre was asked if the Biden administration should be held accountable for not pushing schools to reopen sooner, she shifted the blame to Republicans.

“In less than six months, our schools went from 46 percent open to nearly all of them being open full time,” Jean-Pierre told reporters last Thursday. “That was the work of this president, and that was the work of Democrats, in spite of Republicans not voting for the American Rescue Plan, of which $130 billion went to schools to have the ventilation, the tutoring, and being able to hire more teachers.”

Meanwhile, an education-themed Democrat campaign ad has resurfaced and is circulating again on social media. In the ad, dated July 27, 2020, Trump’s pro-school reopening stance was deemed harmful to teachers and children.

“[Trump is] desperate to reopen schools because he thinks it will save his reelection,” the ad’s narrator says in an ominous voice. “[He is] ignoring how the virus spreads, risking teachers’ and parents’ lives, going against the advice of experts.”