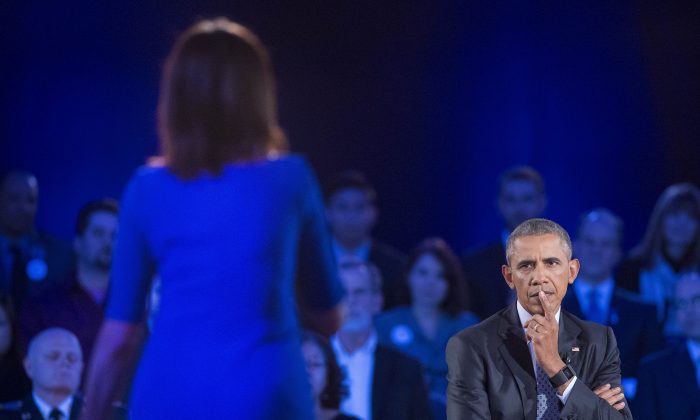 President Barack Obama was confronted by multiple pro-gun people during his town hall on Thursday night, including the widow of “American Sniper” Chris Kyle.

Taya Kyle used the opportunity to address Obama’s recent executive actions on gun control, telling him: “The thing is that the laws that we create don’t stop these horrific things from happening, right? And that’s a very tough pill to swallow.”

“We want to think we can make a law and people will follow it but by the very nature of their crime they are not following it,” she added.

“By the very nature of looking at the people who hurt our loved ones here, I don’t know any of them would have been stopped by the background check and yet, I crave that desire for hope, too,” Kyle claimed.

“And so I think part of it we have to recognize that we cannot outlaw murder because the people who are murdering, right, are — they’re breaking the law but they also don’t have a moral code that we have. And so they could do the same amount of damage with a pipe bomb, the problem is they want to murder.”

She noted that America is at the lowest murder rate of all time, while also reaching an all-time high of gun ownership.

“When you talk about the NRA and after a mass shooting that gun sales go up, I would argue it’s not necessarily I think somebody is going to come take my gun from me but I want the hope and the hope that I have the right to protect myself, that I don’t end up to be one of these families, that I have the freedom to carry whatever weapon I feel like I need,” she added.

“I understand that background checks aren’t necessarily going to stop me from getting a gun, but I also know they wouldn’t have stopped any of the people here in this room from killing. And so it seems like almost a false sense of hope. So why not celebrate where we are? I guess that’s my real question– [and] celebrate that we’re good people and 99.9 percent of us are never going to kill anyone.”

Obama started his response by saying thanks for the service of Kyle’s husband, as well as her service.

“What you said about murder rates and violent crime generally is something we don’t celebrate enough. The fact of the matter is that violent crime has been steadily declining across America for a pretty long time. And you wouldn’t always know it from watching television,” he said.

“Now, I challenge the notion that the reason for that is that there is more gun ownership. Because if you look at the where the areas are with the highest gun ownership, those are the places that the crime hasn’t dropped down that much.”

The president said he was “not sure” there’s a correlation between the low murder rate and the high gun ownership.

“But I think the most important point I want to make is that you will be able to purchase a firearm, some criminals will get their hands on firearms even if there is a background check … But in the same way that we don’t eliminate all traffic accidents but over the course of 20 years traffic accidents get lower … but over time that violence was reduced so families are spared. That’s the same thing we can do with gun ownership,” he concluded.

Obama was also confronted during the town hall by an Arizona sheriff who is running from Congress.

Paul Babeu challenged the president to state specifically which mass shootings his executive actions would have prevented.

“The talk, why we’re here, is all these mass shootings. And yet you’ve said in your executive actions, it wouldn’t have solved even one of these or even the terrorist attack,” he said.

“No, I didn’t say that,” Obama interjected.

“Well, looking at the information, what would it have solved?” Babeu asked.

Obama responded saying that he thinks “it’s really important for us not to suggest that if we can’t solve every crime we shouldn’t try to solve any crimes.”

“The problem when we talk about that guns kill people, people kill people. Or it’s primarily a mental health problem. Or it’s a criminal and evil problem. And that’s what we have to get at. All of us are interested in fighting crime. … That’s a huge priority to us,” the president told Babeu.

“The challenge we have is that in many instances you don’t know ahead of time who is going to be the criminal. It’s not as if criminals walk around with a label that says, ‘I’m a criminal,'” Obama added. “And by the way, the young man who killed those kids in Newtown — he didn’t have a criminal record. … But he was able to have access to an arsenal that allowed him in very short order to kill a classroom of small children.”