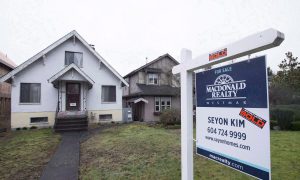 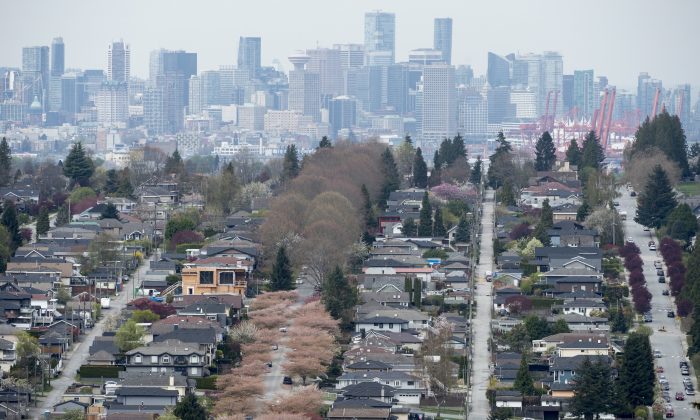 Homes are pictured in Vancouver on Apr. 16, 2019. Even as the city’s housing market undergoes a steep decline in activity, it remains unaffordable and continues to be in bubble territory. (The Canadian Press/Jonathan Hayward)
Economies

Toronto and Vancouver real estate markets are still giving Canada’s national housing market a bad rap even with the latter in correction mode.

Heated debate prevails about how policy-makers are cooling down the housing market. Many industry players target the B-20 mortgage stress test as being too harsh and flawed and are proposing alternatives. But policy-makers and Royal Bank senior economist Robert Hogue feel the test is doing its job—gradually letting air out of the bubble instead of making it pop.

Canada is being singled out again—this time by Bloomberg economist Niraj Shah—as being overdue for a correction. It is the only country to appear among the top five in four categories that make up a “housing bubble dashboard” he developed.

The dashboard metrics in which Canada treads dangerously are the ratios of house prices to incomes and to rents, house prices relative to inflation, and household credit (as a percentage of GDP).

Summarizing Canada’s housing market with national-level statistics borders on sophistry given the diverse geographic, demographic, and economic realities in the various local markets. However, Toronto and Vancouver do move the needle nationally. The Canadian Real Estate Association (CREA) says that excluding those two markets would trim the national average house price by over $100,000 to less than $400,000.

Nevertheless, using national statistics since 2015, house prices have risen nearly twice as fast as rents have. Relative to incomes, house prices have also risen too quickly, which leads to a complete lack of affordability, especially in Toronto and Vancouver.

Buying a condo is a bigger step up from renting than it’s ever been in the highly unaffordable markets, which also includes Victoria. According to RBC, condo prices have surged 119 percent since the end of 2015 in Vancouver, 140 percent in Toronto, and also 102 percent in Victoria. In the past three years, rents have gone up in those three cities by just 6.4 percent, 4.4 percent, and 7.6 percent respectively. The affordability of condos—among the least expensive forms of housing—has worsened compared to single-family homes.

While inflation has hovered near 2 percent over the last several years, the national benchmark house price change over the last five years is 38 percent, according to CREA. The low interest rates engineered by central banks have pushed inflation into real estate and stocks instead of food and clothing.

Canada’s households are highly in debt—owing roughly $1.70 for every dollar of disposable income. Bloomberg Economics calculates the household credit-to-GDP ratio to be 100.7 percent. At over 100 percent, lending is deemed unsustainable and the likelihood of default increases.

Housing bubbles have been exacerbated by capital outflows from Russia and China. And now, major central banks are leaning toward lower interest rates, which will add fuel to the borrowing fire. Canada is in a precarious position, as knock-on effects of what could happen in Toronto and Vancouver can throw the entire economy into disarray.

Thus, the problems cannot be ignored at a national level and regulators are only too aware of the red flags.

However, the reality is that housing markets in Ottawa, Montreal, and Halifax are well-balanced. After a swoon, Toronto is in recovery mode and may have found stability. Vancouver is under pressure from a slew of regulations, while the Prairies and Alberta, in particular, are struggling.

Hogue’s main message is that changes that are occurring in Canada’s housing markets have to be viewed through the policy-makers’ lens.

“What we’ve seen in the last two to three years in Canada [slowing in home sales in Toronto and Vancouver] has all been policy-induced … not because of a weak economy or because of interest rates,” he said. “So going forward we need to keep the same lens.”

“I would say stick with it,” Hogue adds, referring to the mortgage stress test in its current format, which requires homebuyers to qualify at the greater of the Bank of Canada’s 5-year mortgage rate or 2 percent above their contract mortgage rate.

“But there’s been a number of other measures as well to cool the markets,” he said, noting that if markets start to collapse, then policy-makers should consider easing up on the rules. Hogue also says housing policy could even be stricter if markets start to overheat again. Policy needs to be nimble enough to adjust if needed.

And that is a point of contention for the industry, as the Bank of Canada 5-year mortgage rate was only recently reduced from 5.34 percent to 5.19 percent. This marks the first time that it has fallen since September 2016. Meanwhile, the interest rate on 5-year Canadian government bonds, which drives mortgage rates, has fallen by about 0.50 percent in 2019 alone.

Rob McLister, founder of mortgage comparison website RateSpy.com, says the BoC rate is not an independent benchmark but is a function of the posted mortgage rates of the six biggest banks. “It just doesn’t make sense,” he said in an interview with BNN Bloomberg, explaining that it can be manipulated.

Real Estate Board of Greater Vancouver president Phil Moore has recommended a sliding scale for the add-on instead of the flat 2 percent over the contract mortgage rate.

The Bank of Canada said in its May financial system review that past increases in its policy rate and the mortgage stress test have helped keep the threat of excessive debt in check. It also noted that the big banks are ready to handle the risks of a trigger event—a severe recession—and accompanying large correction in house prices.