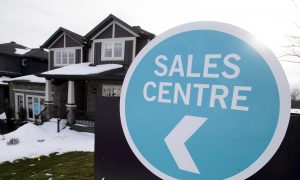 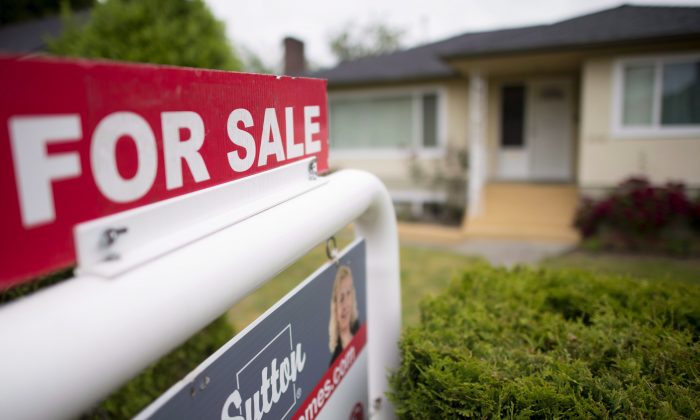 A real estate sign is pictured in Vancouver in this file photo. Home prices are down over 6 percent in the last six months. (The Canadian Press/Jonathan Hayward)
Investment

Chinese money and speculators all but driven out, luxury homes languish
By Rahul Vaidyanath

Vancouver’s once meteoric housing market, besieged by regulation and taxes, is getting pummelled. It’s like tweaking the old adage to “what rises the highest, falls the hardest.” The factors that propelled it to the stratosphere have, one by one, been dismantled and perhaps a new, healthier reality will take shape.

Luxury real estate, once propped up by Chinese and speculative money, is stagnating as its lifeblood looks for friendlier pastures. The foreign buyers tax of 20 percent—up from 15 percent when first introduced in August 2016—has almost completely shut down purchases by foreigners, says Phil Moore, president of the Real Estate Board of Greater Vancouver (REBGV).

In addition, a 2 percent speculation and vacancy tax and 1 percent empty homes tax have sidelined investors. In fact, in a bizarre development, some of the least likely people—students—are renting rooms in multi-million dollar mansions in Vancouver’s priciest neighbourhoods so that the foreign owners can avoid taxes. That’s better for the owners than selling for losses in the hundreds of thousands of dollars, which is also happening.

But Moore says the biggest reason for the market’s decline is the mortgage stress test, known as B20 for the federal guideline’s name. It limits the buyer’s purchasing power as they have to qualify for a mortgage at a rate 2 percent above the market.

“I’m not sure how well it was thought out when it was put into place,” Moore said in an interview.

Many are calling for a re-examination of the stress test. Moore suggested a graduated add-on to the market rate for qualification based on the size of the downpayment instead of the flat 2 percent.

“There should be a mechanism to be able to assess risk more fairly,” he said.

The REBGV reported that February home sales were 42.5 percent below the 10-year average for that month. The benchmark home price in Vancouver was down 6.1 percent from a year ago and down 6.2 percent in the last six months.

“It’s maybe more noticeable now because there are higher-end houses on the market sitting there for so long now,” Moore said.

Data from the province of British Columbia shows foreign money has slowed to a trickle, although non-resident participation in Vancouver real estate remains the highest in the country at about one in five properties, according to Statistics Canada. But now the foreign money is reportedly looking further east.

Wealthy Chinese nationals seek to move their assets abroad to reduce exposure to China’s economy and escape the long reach of the ruling communist regime. But Beijing is trying to crack down on capital leaving the country and so it limits how much can be moved.

Also, as the Chinese stock market struggles amid the Sino-U.S. trade tensions, there is less wealth to be invested abroad. For example, car sales in China—the world’s largest auto market—have fallen for eight straight months and by a combined 43 percent in the last three months, according to the China Association of Automobile Manufacturers.

“Anything above $2 million has started to become slow,” Moore said about Vancouver’s market where the benchmark price is $1,016,600 and out of reach of the average Canadian.

Moore said the segment of the market that is really moving is in the $750,000 and under price range. Prices in regions like Richmond, Burnaby, and North Vancouver that didn’t go through the roof have not seen big price reductions—unlike West Vancouver.

But Moore points out one positive development coming out of the capitulation. “I think that people that are purchasing right now are getting into the market because they’ve found the right house and the right neighbourhood, and they’re buying for long term.”