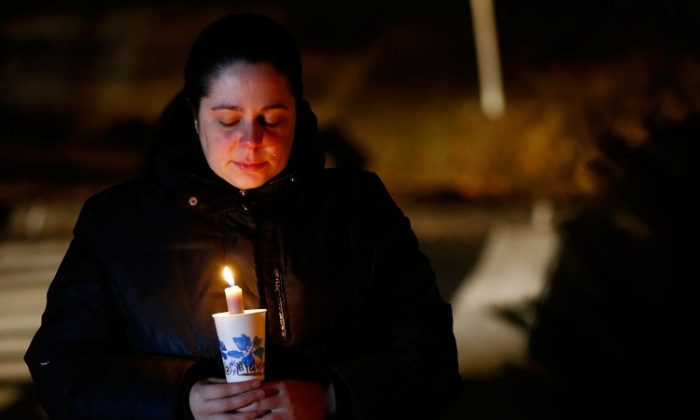 A mourner cries while visiting a memorial, Dec. 15, 2012, in honor of the victims of the Sandy Hook Elementary School shooting in Newtown, Conn. As the nation mourns the tragedy, experts say that we should be careful with how the event shapes national policy. (Jared Wickerham/Getty Images)
US

Since the tragedy at Sandy Hook, America has debated desperately for an appropriate response to match the weight of its outrage.

How could something so horrible be allowed to happen? What can we do to make sure it never does again? How much is the lack of mental health care, school security, or gun laws to blame?

But nearly two weeks after the incident, there are still more questions than answers, as police struggle to piece together exactly why an elementary school in Newtown, Conn., became the focus of such a vicious attack.

According to James Cassidy, Ph.D., clinical psychologist, attorney, and associate professor of the Criminal Justice Department at the University of New Haven in Conn., it has been difficult to determine what the true story is because so many details seem to change.

“There are so many different reports right now, it’s hard to know what to rely on,” said Cassidy, former head of Connecticut’s Whiting Forensic Institute—a hospital for the criminally insane. “Clearly there’s some element that his mental health played a role. How exactly it played a role is unclear at the moment.”

Cassidy dismissed several reports that the 20-year-old shooter had an autism spectrum disorder—not only since it has not been verified, but also because “there is no reason to suggest that autism spectrum kids would be involved in mass shootings.”

In a Dec. 19 statement, Newtown police said that investigating all the evidence is “very daunting and time-consuming,” as state and federal authorities work to examine all aspects of the crime.

Yet many reports and interest groups are already demanding that changes be made. Some are pressing legislators and officials for stricter gun laws, while the National Rifle Association has called for assigning armed guards at all schools to fend off similar invasions.

Instead of bringing clarity to a terrible situation, much of the heated debate surrounding the incident has only helped fuel further hysteria. Since the shooting, Wal-Mart has sold out of assault rifles in several states, the nonprofit news organization Mother Jones reported that sales of children’s body armor and bulletproof backpacks have skyrocketed, and many parents are giving new consideration to homeschooling.

“I think it’s important that people not get the impression that there’s been some kind of escalating trend,” said David Finkelhor, Ph.D., director of the Crimes against Children Research Center, co-director of the Family Research Laboratory, and professor of sociology at the University of New Hampshire. “There hasn’t been.”

In the midst of media frenzy, Finkelhor’s statistics are comforting. Sandy Hook is an anomaly; school shootings are extremely rare to begin with and have actually fallen since the 1990s.

According to Finkelhor, Sandy Hook is unusual in many ways, but he stressed that the knowledge we may get from analyzing this case will not necessarily be useful in terms of the things the nation needs most in order to keep children safe.

“I’m not saying that there are no lessons at all, but I do think we have to be very, very careful,” he said. “There’s an adage in public policy that notorious cases make bad law. So we have to be cautious about this.”

Finkelhor said that events such as the Sandy Hook shooting have a societally, traumatizing component to them, much like the 9/11 attacks, but he hopes that analysts and policymakers will come to consider this event more broadly.

“In the urge to do something, we went into a war that didn’t really make us any safer. It was based on a kind of knee-jerk reaction to a sense that we’ve been threatened and we needed to do something about it,” said Finkelhor. “I don’t think [Sandy Hook] is at that level, but seeing the forest through the trees here is the big challenge.”

Glenn Muschert, Ph.D., associate professor of sociology at Miami University in Ohio, has studied the social impact of mass murders extensively, particularly in respect to school shootings. He said that while the voyeurism of other people’s trauma can be mesmerizing, “It doesn’t really help any of us to reach a resolution.”

“Take schools for example,” he said. “Schools are extremely safe for children—one of the safest places there are. However, the repeated exposure to school shootings in media skews the perception of safety.”

Muschert’s recent work focuses on the kind of reactionary policies the Newtown shooting might soon bring about, such as heightened school security—more metal detectors, police presence, and surveillance cameras.

These escalating police-state measures may guard against extreme cases, but according to recent research, less conspicuous solutions are actually much more effective at addressing the vast majority of school violence.

According to Muschert, peer mediation, real work to fix relationships between students, faculty, and administration, and conflict resolution education have actually done much more to create a safer environment.

“We’ve taken this punitive approach in the U.S. of having zero tolerance policies and police, but that does not restore the peace. That does not fix the underlying conflicts from which the violence arises,” he said. “I worry that it tells children that they’re a problem that needs to be policed.”

Experts have said that Americans have a very low risk tolerance with regard to children, but try as we might, we cannot protect them from everything. Muschert advises that the best way to protect children is to prepare them.

“The alternative is locking them down, and I don’t think that’s really good for children either,” he said. “Children have to be out and about, otherwise they don’t really learn how to live in the world. And sooner or later, they’re going to be adults who have no idea what they’re doing.”

Finkelhor said that while the media may play some role in stirring national hysteria, it is not solely to blame.

“I think part of the problem is that the public doesn’t know what’s good for it,” he said. “They hunger for information, and detail, and graphicness, and wanting to have answers quickly, and so the media provides that.”

While we have come to rely on media intimately—and even exclusively—as an information source, experts agree that there can be too much of a good thing.

“I don’t think that the public understands that it may not be healthy for individuals to get engaged in all of the details and minutia of this horrible event,” said Finkelhor. “But it’s part of our public life now, so it’s hard for me to fault the media. ”

Cassidy said that it is especially important for parents to make sure their children are not overexposed to the 24-hour coverage of Sandy Hook, “because they’re the ones who most are vulnerable to this.”

Finkelhor added that when it comes to young children, it is best to keep the message simple.

“Just reassure kids that they’re safe. That’s mostly what they want to know,” he said.