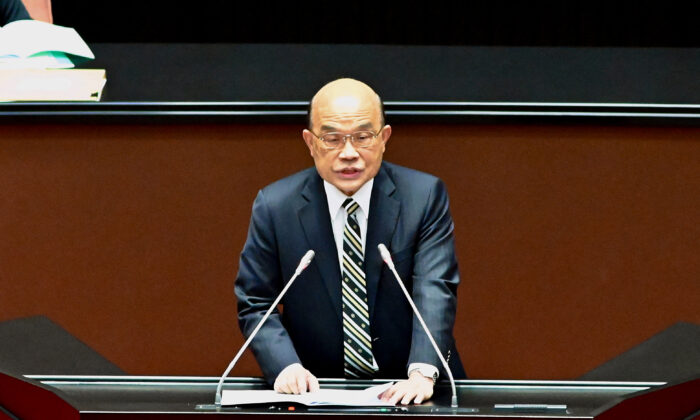 Taiwan's Premier Su Tseng-chang speaks during a session at the parliament in Taipei, Taiwan, on March 1, 2022. (Sam Yeh/AFP via Getty Images)
International Relations

Taiwan Shooting Down a Drone Near China Was ‘Appropriate’: Premier

TAIPEI—The shooting down of a drone off the Chinese coast that buzzed a Taiwanese-controlled island was the most “appropriate” thing to do after repeated warnings, and China should exercise restraint, Taiwan Premier Su Tseng-chang said on Friday.

For the first time, Taiwan’s military shot down an unidentified civilian drone that entered its airspace near an islet near China’s Xiamen city on Thursday, after the government vowed tough measures against a rise in intrusions.

The Chinese communist regime responded that Taiwan was trying to “hype up tensions” over the incident, which follows the island’s complaints of harassment regarding drones from China flying close to the Kinmen islands, as Beijing stages military drills around Taiwan.

Su told reporters that Taiwan had repeatedly issued warnings and asked the Chinese Communist Party (CCP) “not to encroach on our doorstep.”

The drone was shot down after entering restricted air space near the tiny Lion islet, and crashed into the sea, according to Taiwan’s military.

“They repeatedly ignored our warnings to leave and we had no choice but to exercise self-defense and shoot,” Su said. “This is the most appropriate reaction after repeated restraint and warnings.”

“We will never provoke, and we will do the most appropriate thing to protect our land and our people.”

The Kinmen defense command said on Friday its forces detected two further drones which “quickly” flew back to Xiamen after troops fired flares to warn them away.

The defense ministry also released pictures on Friday of troops on Kinmen aiming the Taiwan-developed Skynet “interference gun,” which can cut off drone control signals forcing them to land. It said troops are using high calibre rifles to shoot at drones too.

Chinese forces have been exercising near Taiwan since early August following the visit to Taipei of U.S. House Speaker Nancy Pelosi, which angered Beijing.

The CCP views democratically-governed Taiwan as its own territory, despite the strong objections of the government in Taipei.

At least two videos of recent drone trips have circulated widely on Chinese social media, including one in which Taiwanese soldiers were seen throwing stones at the craft.

Su said these videos were made for the CCP’s “propaganda at home,” adding to the anger of Taiwan’s people.

Taiwan fired warning shots at a drone for the first time on Tuesday shortly after President Tsai Ing-wen said she had ordered the military to take “strong countermeasures” against what she termed Chinese provocations.

Tsai has championed the idea of “asymmetric warfare” to make its forces more mobile and hard to attack. Speaking via video link to a forum in Prague on Friday, Taiwan’s Foreign Minister Joseph Wu said that remained a focus.

“To safeguard our security and sovereignty, Taiwan will continue to develop its asymmetric capacity to make the invasion across the Strait very difficult and costly,” he said.

Taiwan has controlled Kinmen, which at its closest point is a few hundred meters (feet) from Chinese territory, since the defeated Republic of China government fled to Taipei after losing a civil war to Mao Zedong’s communists in 1949.

At the height of the Cold War, the Chinese regime regularly shelled Kinmen and other Taiwanese-held islands along the Chinese coast, and while they retain a sizeable military presence they are now also tourist destinations.