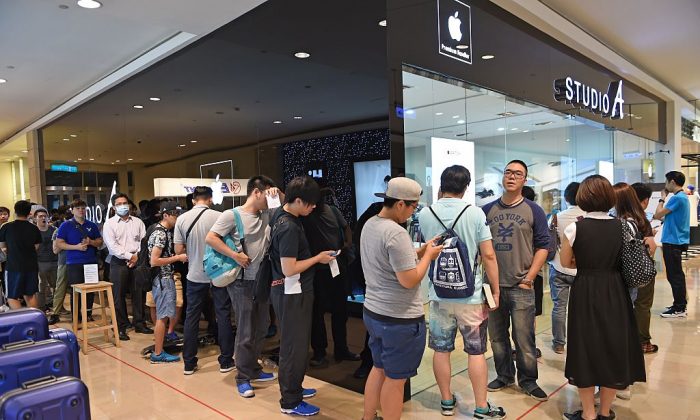 Customers line up to buy the new Apple Watch as the smartwatch goes on sale for the first time in Taipei on June 26, 2015. (Sam Yeh/AFP/Getty Images)
Asia & Pacific

TAIPEI, Taiwan—Police in Taiwan have broken up an alleged criminal operation with ties to China that sold counterfeit iPhone and Samsung phones.

Almost 3,900 items, including smartphones and accessories such as headphones and chargers, were seized by police at a store in the northern Taiwanese city of Taoyuan recently, according to a Jan. 30 article by Taiwan daily newspaper Liberty Times. The report didn’t specify the exact date.

The items, if authentic, would have a market value of over 10 million New Taiwan Dollars (about $324,900), according to the police.

Police acted on a tip that the store was selling second-hand phones and demo units carrying the Apple and Samsung brands, at 2,000 to 5,000 New Taiwan Dollars ($65 to $162). Demo units are phones used for display at a store and are eventually sold at lower prices.

The police found that the phones easily malfunctioned upon purchase.

The fake phones and their accessories were also being sold on Ruten and Shopee, both popular e-commerce platforms in Taiwan.

After analyzing 135 fake iPhones and 44 Samsung smartphones, the police determined that many of these knockoffs were built with completely fake components—except for the chip that powered the phones. For example, a fake iPhone 6 had an authentic A6 chip that would be used to power a real iPhone 5. The phones were assembled in China.

The police arrested four people: a 22-year-old man from China identified only by his surname of Li, and three employees hired to work at the Taiwan store.

Li told police that he was hired by a ring located in central China’s Hubei Province, for a monthly salary of 12,000 New Taiwan Dollars (about $390) to travel to Taiwan and manage operations there. He added that he also repaired cellphones and took part in online sales.

Li also said that he had come to Taiwan under the cover of getting aesthetic surgery, and was scheduled to fly back to China, if he hadn’t been arrested.

Taiwan offers a 15-day medical tourism visa; many mainland Chinese have been known to come for medical services, including getting vaccinations, because of repeated scandals involving substandard vaccines in China.

An account book seized from the store indicated that the sales of fake phones had generated a monthly revenue of about 2 million New Taiwan Dollars ($64,986) since May 2018, according to the police.

According to Liberty Times, the four arrested have been charged with violations of Taiwan’s trademark law.

China is known as the world’s largest manufacturer of counterfeit products, ranging from shoes, clothes, to electronic gadgets.

U.S. customs officials have seized some mass shipments before they made it to the U.S. market.

In Oct. 10 last year, San Francisco-based digital media The Information reported on a fraudulent scheme involving iPhones in China. The scheme involved buying or stealing iPhones, removing the components, replacing parts, and returning the manipulated phones to Apple’s retail stores, with the claim that they malfunctioned “under normal conditions.” That way, the criminals could ask for a new replacement phone.