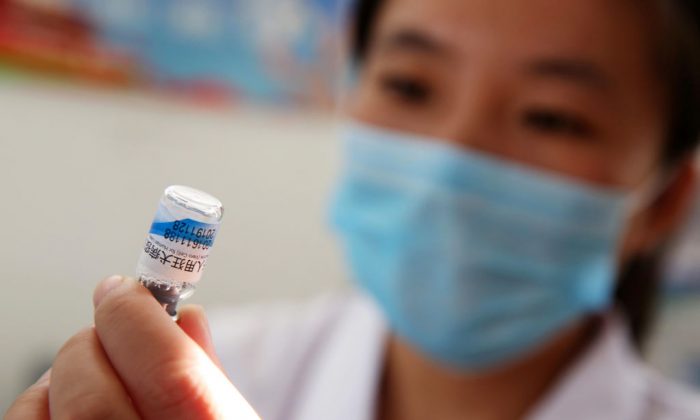 A nurse prepares a vaccination shot against rabies at the Disease Control and Prevention Center in Huaibei in easern China's Anhui Province on July 24, 2018. (AFP/Getty Images)
Chinese Regime

In China, Vaccine Scandal Escalates as Mainland Chinese Turn to Hong Kong and Taiwan for Inoculation

Since July 17, Chinese pharmaceutical company Changsheng Bio-Technology and its subsidiary Changchun Changsheng came under fire for producing substandard vaccines and failing to recall their products in time. The former shipped out more than 250,000 doses of a faulty DTap vaccine to eastern China’s Shandong Province, while the latter forged data related to manufacturing its Vero-cell rabies vaccine.

The DTap vaccine, which is administered in a series of four injections for young children from 3 months old to 18 months old, is a combination vaccine to provide children immunity against diphtheria, pertussis, and tetanus.

Chinese leader Xi Jinping has since called the scandal “vile in nature and shocking,” according to a July 23 report by the Chinese regime’s mouthpiece China Daily, and demanded a thorough investigation to “ensure those responsible face the full force of the law.”

The intense public reaction has forced officials to respond, when they typically skirt away from any bad news relating to China.

On July 22, Chinese Premier Li Keqiang said the scandal had “crossed a moral line,” and asked the State Council to immediately send out investigation teams, according to China Daily.

On July 24, the Central Commission for Discipline Inspection (CCDI), the Chinese Communist Party’s anti-corruption watchdog, announced that it was investigating Changsheng Bio-Technology for suspected corruption, according to Reuters, while the company’s chairwoman, Gao Junfang, and 14 other employees were detained by police in Xinqu District in Changchun City, Jilin Province—where the company is headquartered, according to Radio Free Asia (RFA).

The vaccine scandal has since escalated as another Chinese pharmaceutical company was found to have produced substandard DTap vaccine.

On July 23, the center for disease control and prevention in Hebei Province in northern China announced that substandard TDap vaccines manufactured by Wuhan Institute of Biological Products, a subsidiary run by the state-owned China National Pharmaceutical Group, were administered on 143,941 children in Shijiazhuang, Langfang, and Dingzhou cities in Hebei, according to state-run Chinese media The Paper.

Similar to the case with Changsheng Bio-Technology—whereby the company quietly recalled the problematic doses last November, but by then, it was too late to stop more than 215,000 children from being inoculated with the vaccine—the Wuhan Institute did too little too late.

Wuhan Institute’s substandard TDap vaccines were uncovered by the China Food and Drug Administration on October 30, 2017, according to a report by the state-run Hebei Daily. An immediate recall and suspension of use were enforced, but by then, of the 210,000 doses sent to the three cities in Hebei, 189,775 doses had already been used.

Meanwhile, in the municipality of Chongqing in southwestern China, the city’s disease and control prevention center announced on July 24 that it had received 190,520 doses of Wuhan Institute’s substandard TDap vaccine in 2017, according to Chinese news site China News. These vaccines had been inoculated on 142,343 children before local authorities were alerted of the problem and issued a recall in November 2017.

It is unclear whether Wuhan Institute’s substandard doses have affected other regions of China.

Many parents, worried that their children may become a victim of faulty vaccines, are now planning to travel to Hong Kong and Taiwan instead for safe vaccines.

In Shenzhen, a city in southern China that borders Hong Kong, many local residents speaking to Hong Kong media Oriental Daily expressed that they were ready to accept the higher costs to have their children inoculated in Hong Kong.

Mr. Fan, a Shenzhen resident, recalled that his three-year-old son fell ill and was sent to the hospital for treatment after being inoculated with a TDap vaccine at a local health community center a few years ago, according to a July 24 Oriental Daily report. Fan explained even though he does not know if the TDap vaccine that made his son sick was manufactured by Changsheng or Wuhan Institute, he is not taking chances and has reached out to other parents who have taken their children to Hong Kong for inoculation.

“I will not hesitate to spend more money,” said Fan.

Another local parent, Ms. Li, said she had planned on taking her child to Hong Kong to receive vaccination, but she could not afford the high cost, about 1,000 HKD (about $127) per shot. Li added that she could only pray that the vaccines in Shenzhen do not have any problems.

On Hupu, a Chinese online discussion forum, some netizens have recently shared advice that getting children vaccinated while on a vacation is fairly easy, since the Taiwanese government provides a medical visa for mainland Chinese and foreign travelers, according to Hong Kong media Apple Daily.

Chang Chih-lung, a gynecology and obstetrics doctor at Taiwan’s MacKay Memorial Hospital, said that he has witnessed a trend starting a few years ago, when many mainland Chinese would come to Taiwan to be inoculated with the HPV vaccine—to boost one’s immunity against a virus that can cause cervical cancer in women, and genital warts in both men and women, in an interview with Taiwan’s Central News Agency (CNA).

Foreign-manufactured vaccines usually get faster approval by drug regulators in Taiwan, compared to mainland China, explained Chang. To provide an example, Chang said that Gardasil 4, a HPV vaccine made by U.S. pharmaceutical company Merck, was approved by Taiwanese regulators in 2007, but mainland Chinese regulators did not approve the same vaccine until 2016.

Another reason mainland Chinese are increasingly traveling to Taiwan to get inoculations, Chang added, is that there are many faculty vaccines in China.

The vaccine scandal has caught the attention of human rights activists. Sophie Richardson, China director at Human Rights Watch (HRW), called on Chinese leaders to take action to ensure vaccine safety in China, in an article published on HRW’s website on July 23.

Richardson suggested that China could start by releasing incarcerated lawyers, including Tang Jingling and Yu Wensheng, who have represented victims of faulty vaccines in court. Tang is currently serving a five-year sentence on charges of “inciting subversion,” for his representing a group of parents whose children were left permanently disabled after inoculated with problematic vaccines.

Wang’s grandmother, Zhang Da’e, was sentenced to two years imprisonment in June 2018 for causing “social disturbance,” when she petitioned Henan provincial authorities about her grandson’s case.

Finally, Richardson called for greater press freedom in China. She pointed out that in 2010, Wang Keqin, an investigative journalist for the state-affiliated China Economic Times, was removed after he authored an article implicating health officials in the mishandling of vaccines that led to the deaths of four children in northern China’s Shanxi Province.

Currently, China’s online censorship is still in full swing. Online posts commenting about the vaccine scandals are continually being deleted, according to Free Weibo, a website that tracks censorship on China’s social media.