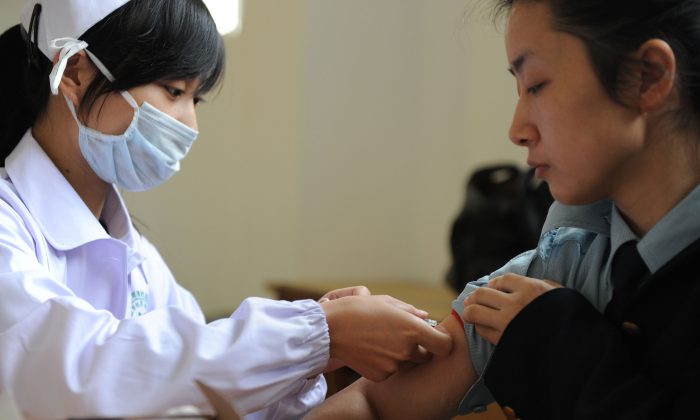 A Chinese nurse inoculates a woman with the swine flu vaccine at a hospital in Hefei City, in eastern China's Anhui Province on November 10, 2009. (STR/AFP/Getty Images)
Chinese Regime

Yet Another Vaccine Recall in China Highlights Severity of Government Negligence

A massive vaccine recall has been ordered in China, underscoring the plight of Chinese who have fallen ill due to faulty vaccines.

On July 15, the China Food and Drug Administration (CFDA) announced that Changchun Changsheng Bio-technology, a vaccine manufacturer based in Changchun City, the capital of northeastern China’s Jilin Province, has uncovered evidence of forged data in its production of a Vero-cell rabies vaccine, according to state-run newspaper Securities Daily. The authorities did not give further details.

While rabies is rare in the United States, with only one to three cases reported annually, it is still a significant health problem in some countries, such as India and China. The Vero-cell platform is an advanced cell-based technology for vaccine production.

The CFDA announced that Changchun Changsheng had not shipped any batches of the problematic rabies vaccine but, as a precautionary measure, would recall all of its recently manufactured products.

Changchun Changsheng’s GMP (Good Manufacturing Practice) license has since been revoked by the Jilin Province food and drug administration.

Changchun Changsheng is the second-largest maker of rabies vaccine in China. The company’s Vero-cell rabies vaccine first hit the market in 2012. In 2017, the company sold 3.04 million batches, with sales revenues of 734 million yuan (about $109 million)—nearly 50 percent of its total operating income, according to Chinese state-run newspaper The Paper.

In an interview with The Paper, Tao Lina, a vaccine expert with the Shanghai Municipal Center for Disease Control and Prevention, explained that forged manufacturing data could mean that the company lied about the amount of active ingredients the vaccine contain and that its potency could be less than 2.5 international units per milliliter—the lowest acceptable amount per single immunization dose according to the World Health Organization.

Tao explained that to save on production costs, several companies have been found to be using less than the required active ingredients to manufacture their rabies vaccines.

In 2008, Dalian Jingang, a drug manufacturer in northeastern China, had its GMP revoked after authorities found that it had added a form of nucleic acid to its rabies vaccine. The resulting vaccine would thus register as having the required potency levels while containing less than the required amount of active ingredients.

Dalian Jingang eventually issued a massive recall of its vaccine—over 320,000 doses—in early 2009, according to a May 2009 report by Chinese news portal Sohu. The vaccine problem was shadowed by apparent inaction by the Chinese authorities: They had known about the faulty vaccines as early as 2004, but did not issue an investigation or recall the products until 2009.

According to Sohu, the National Center for Adverse Drug Reactions Monitoring, an agency under the jurisdiction of CFDA, recorded severe reactions—encephalitis (an inflammation of the brain), purpura rashes, and anaphylactic shock (a life-threatening allergic reaction)—in three people who were immunized with Dalian Jingang’s rabies vaccine.

After the scandal at Dalian Jingang, Chinese media dug into the company’s history and uncovered that the disease control and prevention center in Liaoning Province was once a major stockholder in the company. At one point, top company executives were also officials at the disease control center. However, the center was never investigated or implicated.

Many vaccine scandals have erupted in China over the years, but the Chinese regime has consistently failed to rein in pharmaceutical companies to stop malpractice and improve drug safety. At the same time, the regime’s indifference toward victims of substandard vaccines has been well-documented.

In early July, 40 parents seeking justice for their children who became ill from faulty vaccines sent a petition letter to China’s highest court. They have yet to receive a response from the authorities.

Wang Hailan, a resident in Yuncheng County in eastern China’s Shandong Province, has been detained repeatedly since she began to petition the central authorities about her son, who became sick after getting a flu vaccine manufactured by Changchun Changsheng in October 2010, according to a July 16 report by Radio Free Asia (RFA).

“Within two days after he got the vaccine, he had a major rash. He can walk now, but he is disabled,” Wang told RFA.

Wang explained that she has since spent over 170,000 yuan (about $25,690) on medical treatment for her son. The burden of her son’s medical expenses has driven her to travel to Beijing to appeal to officials from the central government.

In 2015, while taking her son to Beijing for medical treatment, Wang said the police in Yuncheng County followed her to Beijing, stopped her, and forcibly escorted her and her son back home. The police charged her with causing a social disturbance.

In some cases, local drug safety officials collude with pharmaceutical companies. On June 6, Cai Ming, former director of an office in charge of drug safety at the Guangdong Province Food and Drug Administration, was sentenced to eight years in prison after he was found guilty of accepting bribes—including from drug companies—totaling 6.23 billion yuan (about $973,725).