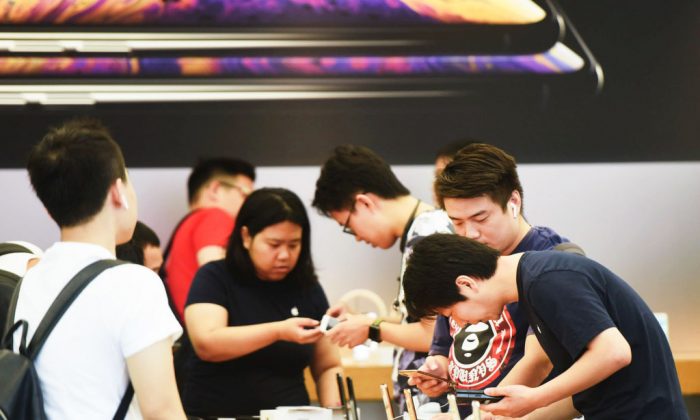 While China is one of the most important markets for U.S. tech giant Apple, the country has long been home to criminal rings that make and sell fake iPhones.

According to an Oct. 9 report by San Francisco-based digital media The Information, organized teams in China have been running sophisticated schemes in which they buy or steal real iPhones, remove components such as CPU or logic boards from the phone, and replace the parts with fake components. Then, the fraudsters return these manipulated iPhones to Apple’s retail stores, claim that the devices were broken “under normal conditions” and ask for a replacement.

The components that were stripped from real iPhones are then used in making knockoff iPhones, some of them sold on online markets as used or refurbished devices.

In an interview with The Information, Kyle Wiens, CEO of iFixit, a tech repair site based in California, equated the behavior of these thieves to people running a so-called chop shop, where stolen automobiles are stripped down and their components are sold for a profit.

Apple learned of the fraud scheme in 2013 when its store in the southern Chinese city of Shenzhen received more than 2,000 warranty claims in a week, including repair and replacement requests, according to The Information.

At first, store employees would simply swap a replacement for “broken” iPhones, as long as they didn’t appear to be intentionally damaged. But the scheme became apparent when Apple discovered that more than 60 percent of the replacement iPhones were registered with new Apple IDs—a sign that these replaced phones never made it to the hands of the original customers, but were instead being quickly sold to others.

There were instances where the thieves paid people to act as real customers and stand in line at the Genius Bar, the tech-support station at Apple stores. The hired actors were given manipulated iPhones to request replacement phones from Apple. The actors would then pass the new phones to the fraudsters.

Since discovering the scheme—common throughout Apple stores in China and Hong Kong, Apple has put in place some preventive measures, such as a reservation system whereby iPhone customers who wish to file a warranty claim must make an online appointment with proof of ownership. But this system was exploited by Chinese hackers who snapped up reservation time slots.

Another system involved having store employees run a diagnostic analysis on iPhones that customers wanted to return, to detect if there were any fake parts within them, without having to disassemble the device. But the thieves came up with countermeasures to evade detection, such as disabling the phones so they couldn’t be turned on.

Fraudsters also attempted to return older iPhones outside of their warranty periods by etching fake serial numbers on the backs of iPhones—numbers that fraudsters obtained by either bribing Apple store employees or sending phishing emails to them.

A phishing email involves the sender, disguised as a trustworthy entity, tricking the email receiver into providing his or her personal information, such as username, password, or credit-card information.

On one occasion, Apple hired security guards to escort its employees to and from an Apple store in Chengdu, the capital of southwestern China’s Sichuan Province, after one of the employees was threatened with a cattle prod after the employee refused to cooperate with a warranty-fraud scheme, according to The Information.

Currently, Apple has in place countermeasures during its manufacturing, such as coating the phone’s CPU with a waterproof sealant and the phone’s batteries with a special dye. Both the dye and sealant can only be seen under a special light, which is a way to check the authenticity of these components during repairs.

According to The Information, Apple was able to lower the percentage of fraudulent warranty claims in China to 30 to 50 percent by 2016—compared to 60 percent at the peak of the fraudulent activity. However, the percentage was still much higher than in the United States, where fraudulent claims were estimated at 5 to 10 percent.

Other Apple Frauds in China

One involves Apple’s app store, according to a May investigative report by China’s state-run newspaper Beijing Business Today, to cheat Apple’s refund policy on accidental purchases, which includes apps, in-app products, or other media purchases.

The newspaper’s reporter went undercover with an experiment. After spending 2,000 yuan (about $290) to buy some in-app items for an unidentified online game available for download on the Apple app store, he sought out a company that claimed to be in the business of specifically helping people get refunds on purchases made through Apple’s app store—by claiming the purchase was “accidental.”

To help the reporter get a refund for his purchase, the company requested the reporter’s email address and password associated with his Apple ID account. It also asked the reporter to set up his phone so that incoming calls would automatically be transferred to the company’s phone—for the purpose of having the company talk to Apple customer service when they called. The company would be able to persuade Apple that the purchase had been “accidental.”

In the end, the reporter received a refund of 1,400 yuan (about $202) from Apple—and he didn’t have to surrender the items he had purchased. The reporter paid the company 700 yuan (about $101) for its service.

There are even in-person classes that teach people “the jargon” needed to convince Apple customer service that their purchases on apps were “accidental.” According to Beijing Business Today, some of these classes are divided into different levels—introductory, medium, and advanced—with the advanced level promising higher success rates of cheating Apple of its refund policy. One introductory class costs 800 yuan (about $115), while an advanced class costs 6,888 yuan (about $995).

Other schemes involve ways to resell stolen iPhones. In December 2017, police in Shenzhen busted an organized crime ring spanning 28 provinces, arresting 57 suspects and seizing more than 2,800 stolen iPhones, according to China’s state-run Science and Technology Daily. Among those arrested were people in the illegal business of unlocking stolen iPhones by bypassing the phone’s Apple ID login.

One of the arrested, only identified as Mr. Fang, said he would send phishing emails pretending to be Apple customer service to the original owners of iPhones he had stolen. That way, he could obtain their Apple IDs and passwords.

Mr. Wen, who was arrested in Sichuan, said he charged several hundred yuan for unlocking an iPhone. Wen and nine other accomplices, all in the illegal business of unlocking iPhones, had profited by more than 2 million yuan ($288,842) when they were arrested by police during the December 2017 raid.

Another article by Beijing Business Today published in April 2016 exposed how authentic iPhone 6 models could be repackaged and sold as iPhone 6S—a more expensive model. An unidentified cellphone repair shop owner in Zhongguancun, a technology hub in Beijing, explained how it was done: the hard casing of an iPhone 6 can be removed and repackaged with the casing from an iPhone 6S. Then, a fraudster could change the phone’s original IMEI number (International Mobile Equipment Identity)—every genuine mobile device has a globally unique IMEI while counterfeit phones either don’t have an IMEI or have a fake one—to a different number that could be verified on Apple’s database.

At Huaqiangbei, a district in Shenzhen known for the massive number of vendors selling both real electronic products and knockoffs, an unidentified vendor told the Beijing Business Today that “refurbished” iPhones, packaged together from components stripped from other iPhones, are often sold as new iPhones by Chinese criminals. A “refurbished” 16G iPhone 6S would sell for 4,450 yuan (about $642), which was about 800 yuan (about $115) cheaper than a real iPhone 6S sold through Apple’s website.