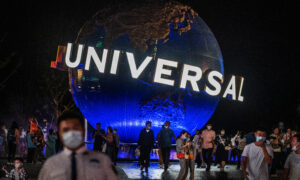 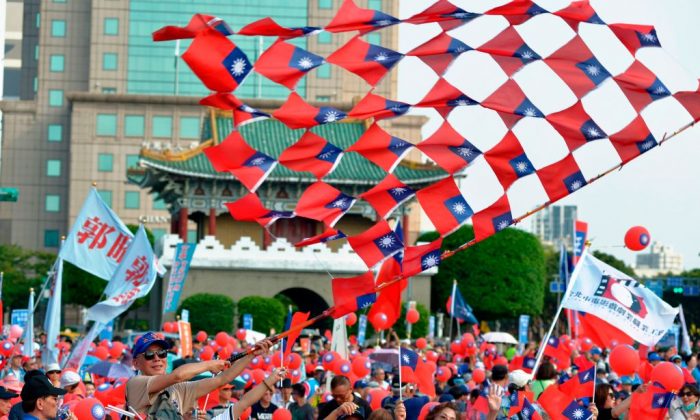 Supporters of mayoral candidate Ting Shou-chung from the opposition Kuomintang party attend a campaign rally in Taipei on Nov. 11, 2018. He is seeking to contest election results that placed the incumbent as the winner. (Chris Stowers/AFP/Getty Images)
Chinese Regime

In draft amendments to the Civil Servants Election and Recall Act and the President and Vice President Election and Recall Act, Taiwan officials agreed to block newspapers, magazines, radio and television broadcasters, digital communications providers, and internet service providers from carrying ads related to election campaigns or election recalls that are funded by sources in Hong Kong, Macao, China, or other foreign countries.

The draft amendments were approved by Taiwan’s Executive Yuan, the island country’s chief administrative organ, according to a Dec. 14 report by Focus Taiwan, an English-language news site run by Taiwan’s Central News Agency (CNA). The measures still need approval by the Legislative Yuan, Taiwan’s parliament, to become law. If approved, they are likely to take effect by 2020, when Taiwan will hold its next presidential election.

Under the draft amendments, violations result in a maximum fine of NT$10 million (about $324,045) or as much as twice the cost of the ad.

Additionally, the amendment stipulates that the names of the advertisers and the people who provided funding must be publicly disclosed, according to Taiwanese daily newspaper Liberty Times. Advertising brokers and media organizations that will carry the ads will be responsible for verifying the sources of funding behind them.

Taiwan’s Premier William Lai, in a cabinet meeting, said the amendments are aimed at countering disinformation and the actions of foreign actors that seek to meddle in Taiwan’s elections, according to CNA.

Taiwan’s latest elections held Nov. 24—in which a number of local political offices were contested, including mayors, county magistrates, and legislators—were marred by political meddling and interference from Beijing.

China’s meddling campaign seeks to influence local voters to vote for candidates with a pro-Beijing platform.

In the Nov. 24 elections, Beijing reportedly funneled money into pro-Beijing candidates’ campaigns to boost their chances of winning. Beijing also tried to sway certain Taiwanese voters, including representatives from local farming and fishing associations, by paying for trips to visit China.

Beijing also has resorted to smear tactics, such as spreading fake news targeting Taiwan’s current administration—which is led by the Democratic Progressive Party (DDP)—due to the Party’s pro-independence platform. The DDP lost many races in the recent elections to the opposition party, the Kuomintang, which is more Beijing-friendly.

China also hires online users, known as the “50-Cent Army,” who join discussions on Taiwan’s social media and post comments that are favorable to Beijing.