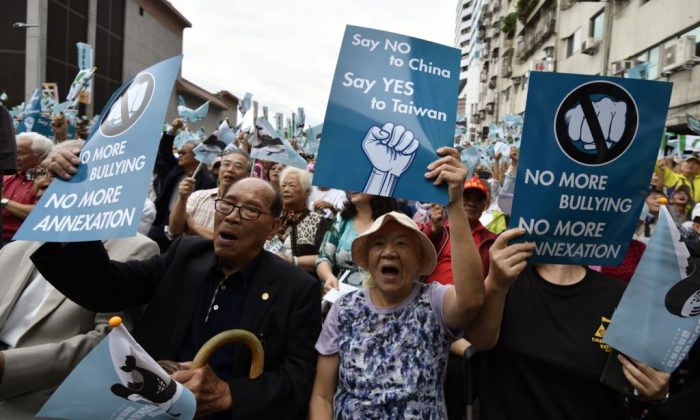 TAIPEI—Taiwan, which is often dubbed “a beacon of democracy” in the Chinese diaspora, concluded its elections on Nov. 24, with a number of political offices in the running, including mayors, country magistrates, and legislators.

The elections, however, were marred by political meddling and interference from Beijing. One incident involving the United States’ top diplomat to Taiwan was just the tip of the iceberg.

James Moriarty, chairman of the American Institute in Taiwan (AIT), a de facto embassy in Taiwan, saw his exclusive interview with Taiwanese broadcaster TVBS removed from the media outlet’s website, six days after a portion of the interview aired on television.

TVBS’s self-censorship has since been widely interpreted by Taiwanese media as an attempt to silence Moriarty’s remarks about election meddling. “There are obviously attempts by external powers here in Taiwan to try and alter the debate and spread false information, and those are dangerous,” he said, without specifying which powers he was referring to.

However, Beijing may have tacitly admitted that it was the culprit. On the same day the TVBS interview aired, Ma Xiaoguang, spokesperson for the mainland Chinese government agency Taiwan Affairs Office, released a statement explaining that China did not try to interfere in Taiwan’s election, according to Taiwanese media.

AIT has since posted the TVBS clip from Nov. 9 onto its official Facebook page.

The U.S. government has also addressed the problem of China’s meddling in Taiwan’s elections. An annual report issued by the U.S.–China Economic and Security Review Commission included findings from Peter Mattis, research fellow at the Victims of Communism Memorial Foundation. Mattis wrote that Beijing, through its United Front Work Department, aims to shape or destabilize Taiwanese society, for the goal of creating a “‘fake civil society’ that can be used against Taiwan’s democratic system.”

The United Front Work Department is an organ of the Chinese Communist Party (CCP) that carries out operations around the world to fulfill Beijing’s agenda.

While Taiwan is a self-ruled island with its own constitution and military, China considers it a renegade province that must be reunited with the mainland, by force if necessary. Beijing believes any form of social chaos in Taiwan would provide it with a “legitimate” reason to push for its unification agenda; thus, it has intentionally sought to undermine Taiwan’s democratic system over the years.

In this most recent elections, on Nov. 24, Beijing has demonstrated that it could influence the democratic process through a combination of social media, fake news, and funding pro-Beijing political candidates.

The goal of Beijing’s meddling campaign to have candidates with a pro-Beijing platform win, as they are more likely to follow the CCP’s agenda.

Beijing skirts these laws by handing off payments to Taiwanese businessmen working in China, who then steer the money to political candidates. Another method is inviting Taiwanese village- and township-level officials, representatives from local farmers and fishing associations, and teachers and students, on all-expenses-paid trips to China, with the goal of enticing them to persuade more Taiwanese to vote for Beijing-friendly candidates.

On. Nov. 13, Zhang Xiuye, a mainland Chinese national living in Taiwan who was running for city councilor, was charged by prosecutors for taking bribes from China.

Zhang is also the secretary general of the Patriotic Alliance Association (PAA), also known as the Concentric Patriotism Alliance, a pro-Beijing organization in Taiwan.

In August, Zhang was given funds to treat over 20 members of PAA and their spouses to trips in China, prosecutors alleged. Then in October, constituents in Zhang’s election district were treated to banquets, with expenses totaling over 250,000 New Taiwan dollars (about $8,096).

Zhang did not win her election bid. But Ho Han-ting, a member of Taiwan’s New Party, a party that supports Taiwan’s unification with China, bested his opponents to become a member of Taipei’s city council. Back in June 2018, Ho, along with two other members of the New Party, were indicted on espionage charges for conspiring with convicted Chinese spy Zhou Hongxu to infiltrate Taiwan’s military.

His court trial begins the day after he takes office on Dec. 25.

Beijing has more directly funded the pro-Beijing China Unification Promotion Party, whose head is Chang An-ho, a well-known local gang boss with ties to Beijing. The Party’s offices in two counties in Taiwan were targeted in a police raid in early November, according to Taiwanese newspaper the Liberty Times. Police confiscated assault weapons, business records, and vests that Party members wore to candidates’ political rallies. Police found that the Party members were paying citizens 1,000 NTD (about $32) to turn up at rallies and wave China’s national flag for Beijing-friendly candidates—though according to media reports, police were unable to ascertain which candidates they rallied for.

In July, Lai Jui-lung, a Taiwanese legislator, had called on authorities to investigate the China Unification Promotion Party about its source of funding, according to the Liberty Times. Lai, citing statistics provided by Taiwan’s Ministry of Interior that showed the Party had earnings of over 1.73 million NTD (about $55,910) in 2017, questioned how the Party received so much money despite the fact that it does not collect membership fees from its over 30,000 registered members.

Beijing has recently established more friendly ties with the current minority party, the Kuomintang (KMT), as opposed to Taiwan’s current ruling party, the Democratic Progressive Party (DPP), which has advocated for formal independence from mainland China.

The KMT registered a landslide victory in elections on Nov. 24, taking control of several cities and counties that were previously under the jurisdiction of the DPP. KMT candidates Lu Shiow-yen and Han Kuo-yuo both defeated DPP incumbents for the Taiwanese cities of Taichung and Kaohsiung, respectively.

Beijing had in fact resorted to smear tactics to create fake negative news targeting DPP officials, for the aim of swaying public opinion more in support of pro-Beijing candidates.

One such example occurred in early June, when both mainland Chinese and Taiwanese media began to report about a plan by the current Taiwan administration to rent out one of its islands, the Taiping Island (also known as Itu Aba), to the U.S. military—which turned out to be false. China’s state-run newspaper, the Global Times, which often employs a hawkish tone, published an editorial on June 6 proclaiming that the DPP wanted to use Taiwanese citizens as “human shields” in a plan to “bait and fool the United States.”

It is unclear which media reported the fake DPP’s plan in the first place, but similar such fake news has had a negative impact on the ruling party’s approval rating, subsequently leading to Taiwanese voters having more faith in the KMT.

In a Oct. 28 report, Taiwanese magazine Mirror Media explained several methods that Beijing uses to create fake news, which appeared around the time of the 2016 elections. DPP member Tsai Ing-wen won the presidential race that year.

Beijing also uses so-called “content farms,” or websites that intentionally write up fake news. These articles—often portraying KMT or Beijing-friendly candidates in a positive light—are posted onto social media as well as popular content aggregator websites such as COCO01. Some of these sites are registered in China, while others have unknown registered locations.

Aside from flooding Taiwan’s social media with fake news, Beijing also employs a “cyber army” to join discussions on social media and make remarks that are favorable of Beijing, according to Taiwanese media.

In mainland China, the term “50 Cent Army” refers to internet users who are reportedly paid a meager 50 cents by the CCP for every comment they leave on news articles and social media. On articles that portray the CCP positively, the commenters agree enthusiastically. On articles that are critical of the CCP, they react angrily and stoke nationalist sentiment.

About 4 million of these hired internet trolls are college and university students, according to some media reports.

Beijing has also developed its own Taiwan-based cyber army, according to local media Taiwan News. Together, these armies target popular Taiwanese social media, such as PTT, Taiwan’s most popular discussion forum; Line, a messaging and news sharing app; and Facebook. The armies also create videos with fake content and flood these platforms, as well as Twitter and YouTube.

According to Taiwan News, in the most recent election, the armies pushed forward favorable social media discussion surrounding KMT candidate Han Kuo-yu, who won the mayoral seat for the southern Taiwanese city of Kaohsiung.

During a press conference on Oct. 15, Taiwanese lawyers working for Han’s opponent and DPP candidate Chen Chi-mai identified 20 Chinese netizens who often left fake information online, including false polling data that looked unfavorable for Chen. The IP addresses originated from China, according to the Liberty Times.

Another worrying trend that could potentially affect the next elections is businesses that sell social media accounts. Taiwanese magazine Global Views Magazine, in an article published on May 30, reported that since last year, unidentified people have begun buying user accounts on PTT, Line, and Facebook. One seller went by the name “Ptt-King” on multiple Taiwanese e-commerce sites, advertising PTT accounts priced according to how many times a user could log into a specific account. For example, an account sold for 1,417 NTD (about $46) would allow a buyer to log in and out of the account 300 times.

A buyer with control over many social media accounts would be able to spin social media discussion in a certain direction by posting en-masse online comments, or simply giving a thumbs-up on Facebook. This would create the impression that a certain opinion is majority or dominant. A netizen with a different opinion could feel less likely to share their minority opinion.

On Nov. 22, Taiwan News reported that an unidentified Chinese company had successfully cheated Facebook’s account registration certification system to create “zombie Facebook accounts.” The system can randomly assign an IP address outside of China to these zombie accounts, thus disguising the zombie account user as either an overseas Chinese or Taiwanese user. Additionally, the system could control hundreds of zombie accounts at the same time, to friend, like, share, comment, and respond simultaneously.

Taiwanese media speculated that if a Chinese company could come up with such technology, the Chinese regime could possibly something similar in place, perhaps with more advanced capabilities.

Beneath its facade of “liberation” and “equality” is a system that aims to destroy the foundations of social harmony, pushing instead an ideology of hatred and struggle