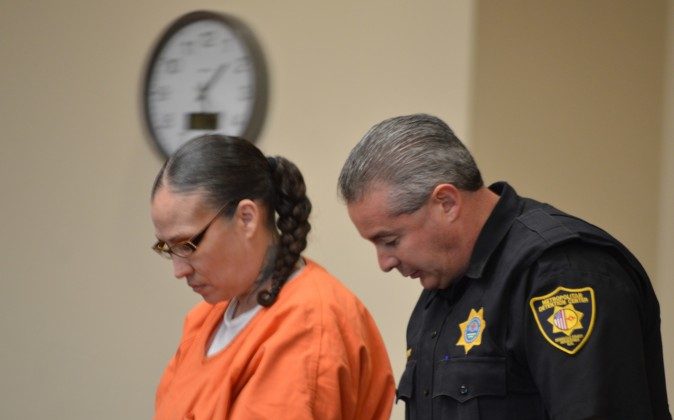 Synthia Varela-Casaus, an Albuquerque, N.M., mother who pleaded guilty in one of the state's most high-profile child abuse deaths, stands in a Bernalillo County courtroom in Albuquerque, Friday, May 6, 2016. Varela-Casaus was sentenced Friday to 40 years in prison in connection with the 2013 death of her 9-year-old son, Omaree. The case drew national attention since Omaree tried unsuccessfully to get help from authorities because of previous abuse. (AP Photo/Russell Contreras)
Crime and Incidents

Synthia Varela-Casaus, of Albuquerque, N.M., was sentenced on May 6 for brutally kicking her 9-year-old son to death in 2013.

Prosecutors said her son, Omaree, tried unsuccessfully to get help from police because of prior abuse, according to The Associated Press.

Omaree’s autopsy determined his dead was the result of a homicide, via blunt force trauma which caused severe internal bleeding.

The initial report given to the Office of the Medical Investigator said Varela-Casaus told police that Omaree was on a toy horse on Dec. 27, 2013, and was pushed off by his 3-year-old sibling, striking his head on the floor and losing consciousness.

“She stated that she called her husband, the decedent’s step-father, who was not at home. Apparently, he placed the decedent in the shower to attempt to revive him. His mother then called his pediatrician who advised her to call Emergency Services,” the initial report stated.

A further investigation determined that the boy’s step-father, Stephen Casaus, was actually home at the time and heard Omaree being beaten by his mother.

In addition to his alleged fall from the toy horse, Synthia told police that she knocked him into a dresser, causing him to fall to the floor. She admitted that while on the floor, she stomped on Omaree twice and kicked him in the stomach.

Omaree was taken to University of New Mexico hospital, where medics attempted to revive him for 30 minutes without success.

Omaree was born in 2004 at Cibola General Hospital, while his mother was incarcerated at the Grants County Women’s Prison, according to the report. There had been nine referrals to the Children Youth and Family Department and two were substantiated.