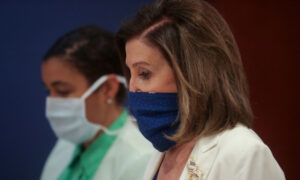 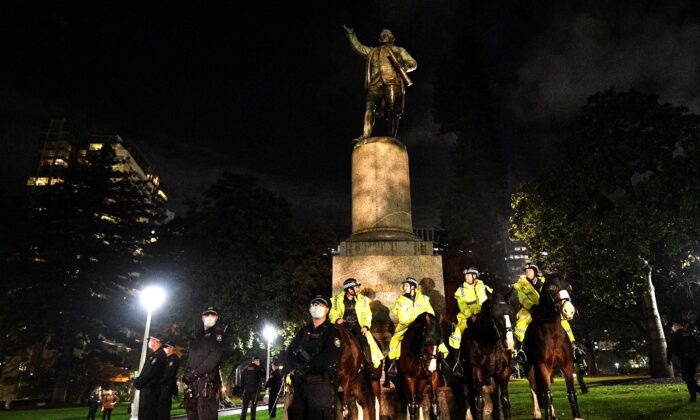 Police stand guard at the statue of Captain Cook in Hyde Park during a protest rally against Aboriginal deaths in custody and to show solidarity with Black Lives Matter movement, in Sydney on June 12, 2020. (Saeed Khan/AFP via Getty Images)
Australia

Two women have been arrested after a Captain Cook statue in Sydney’s Hyde Park was defaced.

Police were alerted to the vandalism about 4 a.m. on June 14 and arrested two women aged 27 and 28, nearby on College Street in the CBD, New South Wales Police said in a statement.

The women were allegedly found with several spray cans in a bag.

They have been taken to Day Street police station where they are expected to be charged.

It comes as Victorian police are also investigating the defacing of statues in Ballarat.

The statues of former Australian prime ministers Tony Abbott and John Howard were sprayed with red paint on Saturday morning.

They have since been covered and fenced off and a conservator will assess the damage on June 15.

A Captain James Stirling statue in Perth, Western Australia was on Friday also defaced and a 30-year-old man has been charged with criminal damage or destruction of property.

A photo on Twitter by Perth Live 6PR shows the statue’s neck and hands were painted red and an Aboriginal flag was painted over the inscription at the base.

Historical monuments across the world have been toppled over the past two weeks as Black Lives Matter protesters march through the streets to call out racism following the death of American George Floyd at the hands of Minneapolis police May 25.

In Australia, people have defied public health warnings amid the Chinese Communist Party virus pandemic and turned out to protest indigenous deaths in custody and to rally in support of the BLM movement in Sydney, Perth, Darwin, Adelaide and Melbourne.