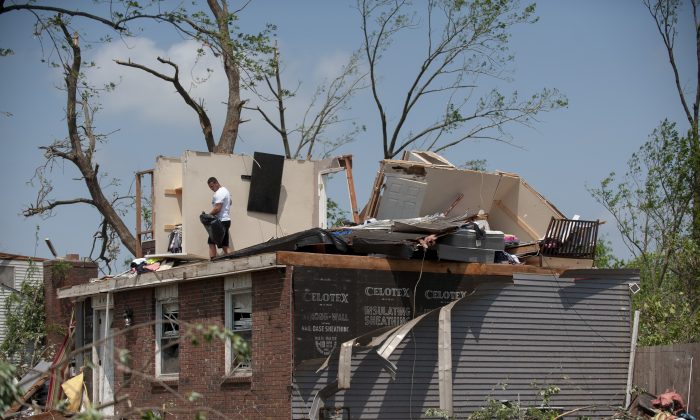 Residents in the West Brook neighborhood cut tree limbs and pick up scattered debris the morning after a suspected ef-4 tornado touched down early in Trotwood, Ohio, on the morning of May 28, 2019. (Matthew Hatcher/Getty Images)
US News

A barrage of storms and tornadoes tore across Ohio and Indiana early on May 28, killing at least one person and injuring scores of others, as homes were left smashed and power outages affected thousands.

Forecasters said the storms were among 53 tornadoes that may have touched down during May 27 across eight states, stretching eastward from Idaho and Colorado. Media reports said that at least one tornado hit Dayton, Ohio, and at least two others touched down near the city, including one near the Wright-Patterson Air Force Base.

The extreme weather came as part of a series of storms that have ravaged the U.S. Midwest in recent days. High winds knocked houses off their foundations, toppled trees, and hurled so much debris that it could be seen on radar. Highway crews had to use snowplows to clear an interstate highway in Ohio. Some of the heaviest damage was reported just outside Dayton.

The National Weather Service said there was a risk of more extreme weather, including tornadoes and hailstorm in Kansas and other Midwest states. In the meantime, residents in Arkansas and Oklahoma braced for more record-breaking floods. The service also said that at least one of the tornadoes reached wind speeds of 140 mph.

On May 23, at least three people were killed in Missouri because of an earlier rash of destructive tornadoes.

It comes as lawmakers from both parties agreed to a deal on May 23 for a $19.1 billion disaster-relief package. The agreement between the House of Representatives and Senate negotiators came after President Donald Trump said he would sign it without any border wall funding.

The Republican-led Senate approved the measure 85–8 as the Democrats, who have a majority in the House of Representatives, said a vote could soon follow in that chamber.

In Celina, Ohio, 81-year-old Melvin Dale Hannah was killed when winds blew a parked car into his house, Mayor Jeffrey Hazel said on May 28.

Storm reports posted online by the National Oceanic and Atmospheric Administration’s Storm Prediction Center showed that 14 suspected tornadoes touched down in Indiana, 11 in Colorado, and nine in Ohio. Six suspected tornadoes were reported in Iowa, five in Nebraska, four in Illinois, three in Minnesota, and one in Idaho.

Trump said he spoke with Oklahoma Gov. Kevin Stitt about the devastating storms. Trump said he reassured Stitt that the Federal Emergency Management Agency and the federal government are “fully behind him and the great people of Oklahoma.”

In Twitter posts, Trump described the overnight storms across Ohio and other states as “very dangerous and damaging,” and noted that his administration is looking into helping those suffering from the extreme weather.

“My team continues to update me with reports from emergency managers in the States affected. Listen to your local officials and be resilient,” Trump said in the post. “We are with you!”

Ohio Gov. Mike DeWine had updated Trump on the devastation from the tornadoes as well, the president said.

“My Administration fully supports the people of the great State of Ohio as they begin the cleanup and recovery,” Trump said.

But according to the PowerOutage.US tracking service, more than 65,000 homes and businesses in Ohio were left without power on the morning of May 27. Officials advised people to boil water after water plants and pumps went out of service.

“I just got down on all fours and covered my head with my hands,” said Francis Dutmers, who with his wife headed for the basement of their home in Vandalia, Ohio, about 10 miles outside Dayton, when the storm hit with a “very loud roar” on the night of May 27.

The winds blew out windows around his house, filled rooms with debris, and took down most of his trees.

A tornado with winds up to 140 mph struck near Trotwood, Ohio, eight miles from Dayton, and Mayor Mary McDonald reported “catastrophic damage” in the community of 24,500 people.

“If I didn’t move quick enough, what could have happened?” said Erica Bohannon of Trotwood, who hid in a closet with her son and their dog. She emerged to find herself looking at the sky. The roof had blown away.

Sue Taulbee, 71, was watching television in her bed in the Dayton suburb of Brookline when she heard the telltale sounds of an approaching twister.

“They say it’s like a freight train: That’s what I heard,” she recalled on May 28. She hid at the foot of the bed while flying debris smashed her window, and she was soon trapped as her home collapsed around her.

“It was only a couple of minutes, but it seemed like an hour,” she said as she sat in her yard, surrounded by her scattered possessions. “I just started screaming and my neighbors heard me and said, ‘Sue! Sue! I hear you! We’re coming! We’re coming!’”