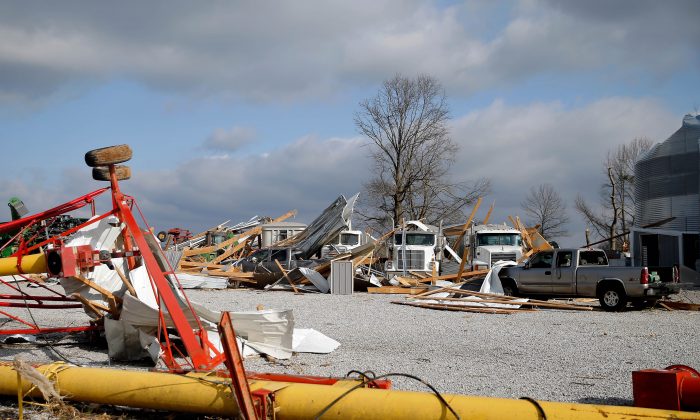 The entire barn that housed the vehicles on the Huber family's farm on route 51 was completely blown away by a tornado in Perryville, Mo., on March 1, 2017. (Jon Durr/Getty Images)
US News

The recent casualties upped the death toll in Missouri for the week of May 19 to at least seven. Forecasters said the violent weather, including the heavy rain and threat of damaging winds, are expected to continue.

“It looks to stay quite wet over the next week across the central portion of the country,” meteorologist Mark Chenard of the National Weather Service (NWS) Weather Prediction Center told Reuters.

The National Weather Service confirmed that the large twister moved over the capital before midnight on May 22. The weather service’s St. Louis office confirmed tornadoes touched down near Joplin, Missouri, as local media, including the Joplin Globe, reported at least three dead.

According to The Associated Press, there were no immediate reports of any deaths or missing people in Missouri’s capital city—where about 40,000 reside—as door-to-door checks were being completed.

NWS meteorologist Cory Rothstein said it’s possible the tornado had a 50-mile path and could have been on the ground for 80 minutes. Weather forecasters expect Missouri to get another two inches of rain through May 24.

“Across the state, Missouri’s first responders once again responded quickly and with strong coordination as much of the state dealt with extremely dangerous conditions that left people injured, trapped in homes, and tragically led to the death of three people,” Gov. Mike Parson said.

In the meantime, the Arkansas riverfront town of Webbers Falls was ordered to evacuate on May 23, while residents of several other rain-swollen riverfront communities were advised to leave, Oklahoma Department of Emergency Management spokeswoman Keli Caine said.

Lawmakers from both parties agreed on a deal for a $19.1 billion disaster-relief package on May 23.

The agreement between the House of Representatives and Senate negotiators came after Trump said he would sign it without any border wall funding. Earlier in May, Trump had requested the legislation to include emergency funds to address a surge in migrants. Border Patrol officials had apprehended more than 500,000 illegal aliens on the border as of May 10.

The president, in multiple Twitter posts, offered his support to the people affected by the disasters in both Missouri and Oklahoma.

“Our hearts go out to the people of Missouri as they woke up to assess the damage from storms,” he said in one post. “You are strong and resilient, and we are here to assist.”

Our hearts go out to the people of Missouri as they woke up to assess the damage from storms. You are strong and resilient, and we are here to assist. https://t.co/paeOVcUQWn

In a separate post, Trump noted how the NWS and the U.S. Army Corps of Engineers are monitoring the storms and flooding in Oklahoma. “Listen to the warnings of your local officials and stay safe. We are with you!” he said on Twitter.

.@NWS and @USACEHQ are monitoring the damaging storms and flooding in Oklahoma. Listen to the warnings of your local officials and stay safe. We are with you!

The three deaths in Missouri happened near Golden City in Missouri’s southwestern corner. They were an elderly married couple and a middle-aged woman, authorities said.

Kenneth Harris, 86, and his wife, Opal, 83, were found dead about 200 yards from their home. Betty Berg, 56, was killed and her husband, Mark, seriously injured when their mobile home was destroyed.

Berg was found dead among the debris outside her mobile home located in the 800 block of E. State Route 126, according to The Kansas City Star. The highway patrol released the names on the morning of May 23.

Sgt. John Lueckenhoff of the highway patrol noted that the three casualties took place just outside of city limits. The population in Golden City, located in Barton County, is around 728, according to 2017 data from the United States Census Bureau.

The tornado, coupled with high winds, downed both trees and power lines in Golden City, the newspaper reported. Outside the city, several structures were also damaged.

The neighbors of the victims told KCTV5 News they were too distraught to talk to them currently. Golden City is located about 45 minutes northeast of Joplin.

As storms continued in the area as of the morning of May 23, some crews arrived at the homes to try to begin the cleanup process. According to KCTV5 News, there was not only damage to the homes, but also to the large farm equipment on the properties.

One resident, William Weiser, told the network that they came back to their home on the night of May 22 to pick up essential items. The next day, he returned to what was left of the home.

“We got a lot of the family pictures—what we could salvage—and that’s all we dealt with last night,” Weiser said.