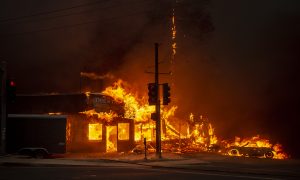 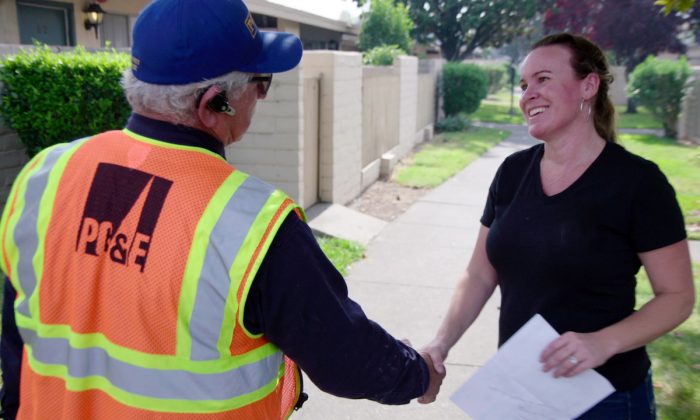 An undated photo of PG&E staff meeting with customers. (Courtesy of PG&E)
Companies

The release claimed the company’s former Chief Executive Officer, Geisha Williams, had donated $2.5 million to help survivors from 2018’s Camp Fire disaster, the deadliest and most destructive wildfire in California history. The statement also quoted other leaders from the company, allegedly throwing their support behind the false information.

PG&E officially denies any connection with the public relations prank.

“There were several social media posts about our former CEO that are simply not true,” a PG&E spokesman said in a written statement. “The posts were connected to a fake website that, despite appearances, is not affiliated in any way with PG&E. For official and accurate news and information related to PG&E, visit www.pge.com or www.pgecorp.com”

The fake website displayed the PG&E logo, blue branded header, and search bar. However, the site does not have a visible ‘Log in’ button at the top right corner like the official website does after closer inspection.

In addition, the media contacts column only has an email address listed while the official site has a phone number for media inquiries and separate contact details for customer service.

The hyperlink is also different. The official website has a longer address embedded under its news room page and news releases index. The fake site has no such history and content is therefore shorter.

Records show the domain originates from Burlington, Mass., on Jan. 20. The IP address registered appears to be from a corporate area with an office building. The IP location listed is The Endurance International Group Inc., a web hosting company.

In 2012, a false statement announced Google would be acquiring ICOA, a wireless Internet provider. Poynter published an article about how frustrating it is for people who rely on press releases to be accurate and true.

To help remove confusion over how to tell if a press release genuine, Satirewire published an piece with tips for identifying fake releases.

Small details like capitalization, language use, and phone numbers can indicate whether the source is reliable.

It is also worthwhile fact-checking information provided. If the written statement is inconsistent with previous general knowledge about a particular company or event, an email or phone call is a good way to help verify the information.