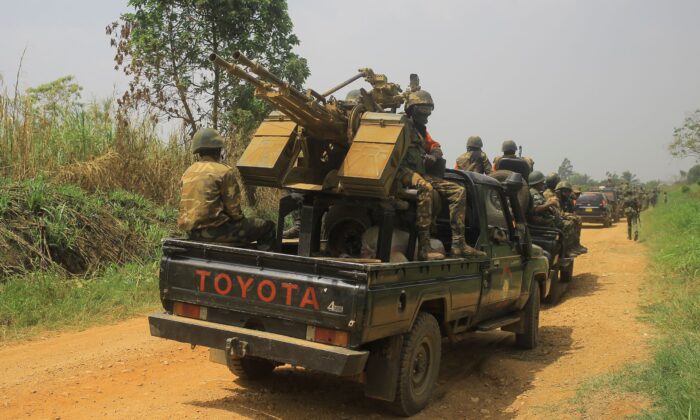 BENI, Democratic Republic of Congo—Suspected ISIS terrorist affiliates killed at least 18 people in a village raid in eastern Congo on June 5, local sources said, while fighting resumed with the M23 rebel group in a neighboring province.

Terrorists believed to be from the Allied Democratic Forces (ADF) killed residents and burned down houses in the village of Otomabere, in Irumu territory, Ituri Province, according to a witness, a local chief, and a local human rights group.

Congolese army spokesman Jules Ngongo confirmed the ADF attack without giving a death toll and said Congolese forces were in pursuit of the assailants.

The ADF is a Ugandan ISIS affiliate that moved to eastern Congo in the 1990s.

The group carries out frequent attacks and killed more than 1,300 people between January 2021 and January 2022, according to a United Nations report.

“We were chatting with some friends outside [when] we heard gunshots, and everyone fled in a different direction. It was total panic,” said Kimwenza Malembe, a resident of Otomabere.

“This morning, we counted 18 dead, killed by knives and firearms.”

Irumu chief Jonas Izorabo Lemi said he had received word of 20 dead. Christophe Munyanderu, coordinator of the local group Convention for the Respect of Human Rights, also said the provisional death toll was 20.

Uganda has sent at least 1,700 troops to neighboring Congo to help fight the ADF. Last week, the two countries extended their joint operation that was launched late last year.

The government accuses Rwanda of supporting the M23, which Rwanda denies. The group’s resurgence in recent weeks has caused a diplomatic rift between the two neighbors.