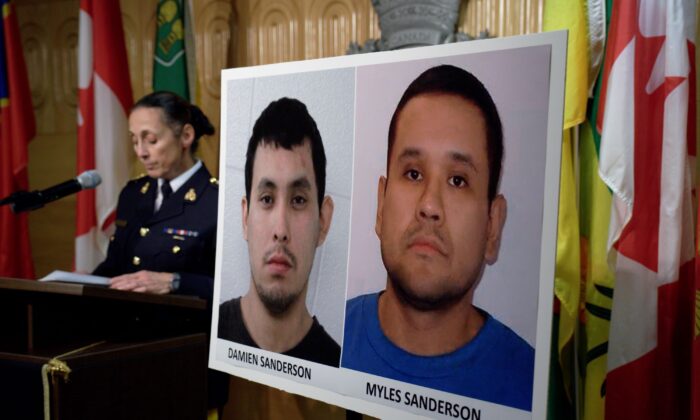 A key suspect in the mass stabbing in Saskatchewan that left 10 people dead and 18 injured, was granted parole seven months ago, with officials saying that setting the man loose would help transform him into a “law-abiding citizen,” documents show.

Myles Sanderson, 30, is one of the two suspects who went on a stabbing spree at several locations on the James Smith Cree Nation and in the nearby village of Weldon, northeast of Saskatoon, on Sept. 4. Police believe some victims of the mass killings were targeted, while others were selected at random.

Documents from the Parole Board of Canada, obtained by The Canadian Press, show that Sanderson had received statutory release from prison in August 2021, but the board revoked it about four months later, saying he failed to communicate with his parole supervisor.

Sanderson was serving his first federal sentence of more than four years, four months, and 19 days, for a slew of offences including assault, assault with a weapon, assaulting a peace officer, and robbery. In total, the document says, he has 59 criminal convictions.

The parole board, however, decided in February to reinstate his statutory release with a reprimand.

“It is the Board’s opinion that you will not present an undue risk to society if released on statutory release and that your release will contribute to the protection of society by facilitating your reintegration into society as a law-abiding citizen,” the document said.

In the early morning of Sept. 4, the RCMP received multiple calls from the First Nation about stabbings at different locations, and hours later released the names and photos of the suspects, Myles and Damien Sanderson, who were believed to be brothers.

Damien Sanderson, 31, was found dead on the First Nation on Sept. 5, which marked the eleventh fatality in the incident.

Sanderson has a long history of alcohol and substance abuse, and associations with gang members, pimps, and drug dealers, which led to his violent behaviours, the document said.

“Your criminal history is very concerning, including the use of violence and weapons related to your index offences, and your history of domestic violence,” said the document, noting the that regular use of drugs and hard alcohol would make him “lose (his) mind” and get angry.

“You can be easily angered when drunk, but are a different person when sober,” the parole board decision said.

He lived between his father’s home in an urban centre and his grandparents’ house on the First Nation—while seeing violence and abuse in both households, the documents said. Sanderson began drinking and took marijuana at around age 12, and cocaine soon after.

In 2017, Sanderson allegedly went to a home where his ex-girlfriend and two children lived, making threats as the children were rushed upstairs into a bathroom and put into a tub for protection, the document said.

“You went upstairs and acted in a threatening manner, talked about the gang, and punched a hole in the bathroom door, frightening the children,” the decision said. Sanderson left the house before police arrived.

Days later, he reportedly got into a fight with a First Nation band store employee, threatened to kill the person and burn down his parents’ house, according to the document.

A few months later, Sanderson also forced an accomplice to rob a fast-food restaurant, threatening him by hitting him in the head with a firearm and stomping on him. Sanderson watched the robbery from outside the restaurant, the decision said.

In 2018, Sanderson was drinking at a home and got angry with the people he was with. The decision said he stabbed two of them with a fork, then attacked another man who was nearby, beating him until the man lost consciousness in a ditch.

Sanderson was finally located and arrested at his partner’s home two months later. During the arrest, he kicked an officer in the face and on the top of the head repeatedly, the decision said. He was later given the sentence of more than four years.

During his time in prison, the report said Sanderson had “participated in programming and cultural activities, and engaged with elders.” The parole board also said if he stayed sober, his risk would be manageable. He was released with conditions to not contact his partner or children, except when necessary for parenting responsibilities.

“The Board is satisfied that your risk is manageable in the community, if you live with your [blacked out] maintain sobriety and employment, and continue with developing supports, including getting therapy,” the board wrote, according to Global News.

In May 2022, just months after his release, Myles Sanderson was listed by the Saskatchewan police as “unlawfully at large.” He was last seen in Saskatoon, about 200 kilometres southwest of the scene of the mass killings on Sept. 4.

RCMP said in a news release on Sept. 5 that the police are still looking for Sanderson, who is likely injured.

Sanderson is described as 6 foot one inch and 240 pounds with black hair and brown eyes. Police said he may be in a black Nissan Rogue with Saskatchewan license plate 119 MPI. It’s unknown if he’s travelling with anyone.

While officials haven’t disclosed the identities of the victims of the stabbing, some of the deceased have been identified, including 77-year-old Wes Petterson of Weldon, 49-year-old Lana Head, and 62-year-old Gloria Burns.