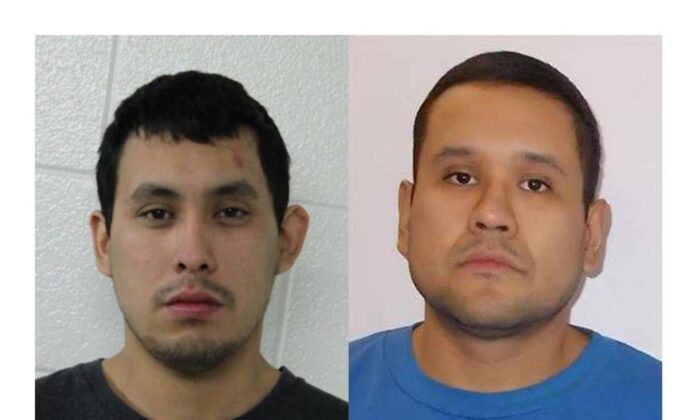 RCMP say Damien Sanderson, one of the two men wanted in connection to the stabbing rampage in Saskatchewan, has been found dead.

The body of the 31-year-old was discovered outdoors in a grassy area on the James Smith Cree Nation, the RCMP told reporters at a press conference in Regina on Sept. 5.

“We can confirm he has visible injuries. These injuries are not believed to be self-inflicted at this point,” said Rhonda Blackmore, assistant commissioner in charge of Saskatchewan RCMP.

The other suspect, Myles Sanderson, 30, is still at large. Blackmore confirmed that the two are brothers.

“Damien’s brother may have sustained injuries. This has not been confirmed, but we do want the public to know this because there is a possibility he may seek medical attention,” she said. “Even if he is injured, it does not mean he is not still dangerous.”

“Myles Sanderson is facing three counts of first degree murder and is wanted,” said Blackmore, adding that he has a history of criminal record involving persons and property crimes. “We consider him armed and dangerous.”

Mounties had said 10 people were killed and 18 injured in the stabbings at various locations on the First Nation and in the nearby village of Weldon, northeast of Saskatoon, on Sept. 4.

Earlier Sept. 5, Blackmore said in a release that the force is using every possible means to locate the suspects.

“We are using every human, investigational and technological resource we have available to locate and arrest the persons responsible for this tragedy and to ensure your safety,” she said.

“Hundreds of Saskatchewan RCMP staff are dedicated to this investigation—this includes operators taking 911 calls and tips, to frontline officers patrolling our streets to the on-scene specialized forensic and Major Crime Unit teams who continue to follow up on all information and evidence gathered.”

The RCMP said it will continue to work closely with the Regina Police Service (RPS) as investigation determined that the two suspects may be in Regina.

“Resources from Manitoba RCMP, Alberta RCMP, partner police agencies and the Province of Saskatchewan are also assisting in this investigation,” it said.

Myles Sanderson is described as six-foot-one and 200 pounds with black hair and brown eyes. He may be in a black Nissan Rogue with SK licence plate 119 MPI. It’s unknown if he’s travelling with anyone.

“The most recent reliable information we have says that [Myles] is in Regina or was in Regina,” said Bray.

“[The information] is a day old, we acknowledge that, but we have nothing that can tell us differently, so we’re going to continue to operate on that.

“Keep in mind this is eyewitness information that provided details on seeing the car [and] confirming the plate.”

Blackmore said previously that police believe some of the victims were targeted and others were randomly attacked. Police declined to provide details in order to preserve the integrity of the investigation.

There’s been no official word on the identities of the stabbing victims, but Weldon residents have identified one of the deceased as 77-year-old Wes Petterson.

The RCMP has said they would release more details about the victims when they have the available information.